VATICAN CITY (AP) - Retired Pope Benedict XVI celebrated his 88th birthday Thursday with a party and a pint of beer.

Photos released by the Vatican newspaper Thursday showed the German pope toasting a group of Bavarians in the Vatican gardens accompanied by his older brother, Monsignor Georg Ratzinger, and his longtime private secretary.

Pope Francis celebrated Mass in Benedict's honor Thursday morning, saying he hopes God "supports him and gives him much joy and happiness."

In recent interviews on the eve of the birthday, Benedict's secretary, Monsignor Georg Gaenswein, said the retired pope feels his age and thinks about his own mortality.

"The emeritus pope thinks about death and is preparing for his death," Gaenswein said in an interview with Mediaset television this week. "It's a Christian art, because preparing for one's death means preparing to meet God."

Ratzinger became the first pope in 600 years to step down, saying he didn't have the strength of body or spirit to carry on. Gaenswein told La Repubblica newspaper Thursday that he tried to persuade him to stay, but that the Benedict was firm and serene in his decision.

These days, Benedict spends his time reading and keeping up with his correspondences, receiving guests and occasionally playing the piano. He isn't writing any new books, however.

"He told me 'Jesus of Nazareth' is my last book,'" Gaenswein said, referring to Benedict's three-volume work on Christ's life, released in the final years of his pontificate. 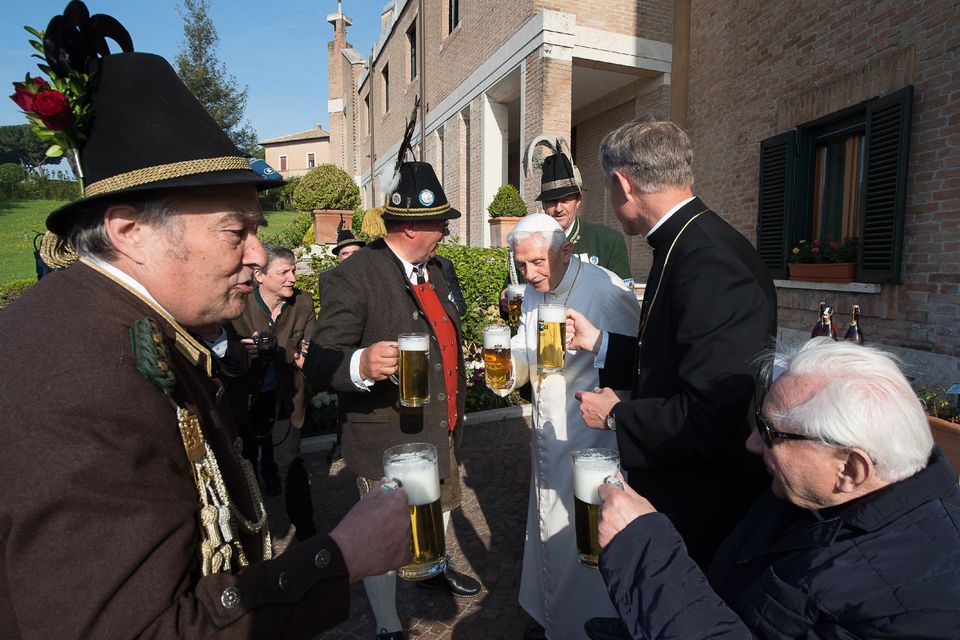 1 / 6
Pope Emeritus Benedict XVI, third from right, toasts for his birthday with his brother Georg Ratzinger, right, Monsignor Georg Gaenswein, second from right, and members of a group from his hometown Bavaria region, in the pontiff's Castel Gandolfo residence, in the hills overlooking Rome, Thursday, April 16, 2015.
ASSOCIATED PRESS