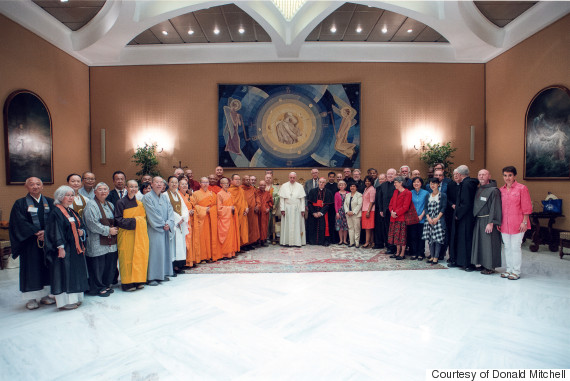 The Pontifical Council for Interreligious Dialogue (PCID), in collaboration with the Catholic Bishops's Conference of India and Religions for Peace, held the Vatican's fifth Buddhist-Christian Colloquium February 12-13, 2015 at Bodh Gaya, India. Bodh Gaya is the site of the Buddha's enlightenment and was chosen for a dialogue since it has temples and monasteries from many different types of Buddhists.

The theme was "Buddhists and Christians Together Fostering Fraternity" and the goal was to build a foundation for interreligious peacebuilding. Sixty leaders of both religions from eight countries took part in discussing the following topics: "We belong to One Human Family," "From a Culture of Diversity to a Culture of Solidarity," "Fraternity, a Prerequisite for Overcoming Social Evils," "Fraternity wipes away Tears," and "Together Fostering Fraternity: The Way Forward." This is an example of how the pope's new "dialogue of fraternity" seeks a higher level of relational engagement in order to address social ills.

Participants agreed that it is not religion per say that causes conflict, but individuals who exploit religion for personal, commercial and political gains. They agreed to return home and pursue the following in the spirit of fraternity:

• Strengthen interfaith connections in communities, neighbourhoods, educational institutions, and places of worship
• Build programs of interreligious awareness and peacebuilding for children, youth, and families in educational institutions and workplaces
• Forget and forgive the past negative history of conflict and violence and move forward to build peace-loving people in solidarity
• Train younger generations in formation houses to overcome prejudice, study other religions, and build solidarity
• Build interreligious fraternity (brotherhood/sisterhood) to support and revitalize family life in order to make society prosper.

A few months later, a "Buddhist-Catholic Dialogue on Suffering, Liberation, and Fraternity" was held in Rome sponsored by the Bishops's Committee for Ecumenical and Interreligious Dialogue (BCEIA) of the United States Conference of Catholic Bishops (USCCB) in collaboration with the PCID. This sixth Vatican dialogue was convened from June 23 to 27, 2015 and included forty-five Buddhist and Catholic leaders and social activists from the regions of New York City, Washington, D.C., Chicago, Los Angeles, and San Francisco. The United States was chosen for this encounter since it also has a large number of Buddhists from different Buddhist traditions.

Presentations from the first day of the dialogue developed the theme: "Relational Suffering and its Causes." "Relational suffering" means the suffering that comes about within relations between persons and with other living beings. The second day was divided between addressing the ways in which Buddhism and Christianity seek to liberate persons from relational suffering, and the ways that both traditions seek to alleviate suffering between persons and all living beings. The latter topic was timely since Pope Francis had just published his encyclical on the environment, Laudato Si'.

Pope Benedict XVI added emphasis on being a Pilgrim Church journeying toward "the fullness of Truth" in friendship with "fellow pilgrims" of other religions. Now, Pope Francis is expanding the dialogue further by emphasizing the need to develop a sense of "fraternity" as a foundation for the dialogue of action that addresses the social ills of our world. True solidarity in such action must be based on fraternity in its original sense of "brotherhood/sisterhood." The papers presented on this third day discussed two topics: the notion of "Fraternity among Human Beings" in Christianity and Buddhism, and "Building a Fraternal World" together.

The final day of the dialogue was devoted to exploring social issues in the United States that the participants felt need to be addressed today, and how Buddhist-Catholic collaborations of fraternal interreligious social action could be advanced in the United States. The participants had a private audience with Pope Francis who encouraged them to "plant seeds of peace" in their cities. In their Joint Statement, the participants agreed to return to the US and explore together the following kinds of joint interreligious social action initiatives:

The full proceedings of the Rome dialogue can be found on the October 2015 issue of Claritas: Journal of Dialogue and Culture, an online open-access journal found at: www.claritas-online.org

The five groups have been meeting since the June dialogue. Three examples of early social action collaborations include the following:

• Immigration Reform Partnership: Buddhist leaders from Los Angeles announced that because of the dialogue of fraternity in Rome, their Buddhist communities would join Catholics in their immigration reform efforts.
• Buddhist-Catholic Homeless Project: The monks and nuns of the Vietnamese Buddhist Compassion Mediation Center and deacons of St. John's Catholic Church have begun feeding the homeless in Hayward, CA.
• Green Affordable Housing: By the end of 2015, all five groups have decided to explore a more lasting project: green affordable housing for the working poor and elderly. This reflects not only a focus of the Rome dialogue, but also of the dialogue in Bodh Gaya on family and children. More about this in my next blog.

I conclude with the words of Pope Francis about this new dialogue of social action: "This interreligious experience of fraternity, each always respecting the other, is a grace." (Press Conference on Board the Flight from Colombo to Manila, January 15, 2015)