VATICAN CITY (AP) — Pope Francis got a cake, cards and a tango demonstration for his 78th birthday Wednesday — and 800 kilograms (1,760 pounds) of chicken meat for the poor.

The Vatican said Wednesday the meat, provided by a Spanish producer, would be distributed to soup kitchens.

As he drove around in the open-air car to greet the crowds, children handed up birthday cards they had made for him. Francis asked one: "Did you make this? It's good!"

Others held up signs saying "Feliz Cumpleanos" ("Happy Birthday" in Spanish) and sang to him.

Outside the square, dozens of couples danced the tango, the Argentine pope's favorite. The pope quipped: "It looks like a two-by-four!" — a reference to tango.

"The tango is a dance that unites all people no matter where they come from," said Patrizia D'Aquino, part of a group from the Abruzzo region of Italy.

Despite the joyous occasion, Francis ended his audience with a sobering prayer for the victims of recent "inhuman terrorist attacks" in Australia, Pakistan and Yemen.

"May the Lord receive in his peace the dead, comfort the relatives and convert the hearts of the violent who don't even stop in the face of children," Francis said.

A Taliban attack on a school in Pakistan left scores of people dead, most of them children. In Yemen, two suicide bombers rammed their vehicles into a checkpoint as a school bus was nearby, killing about two dozen people, more than half of them primary school students. In Australia, an Iranian-born man took 17 people hostage inside cafe; two hostages were killed along with the hostage taker in a barrage of gunfire as police rushed to free the captives. 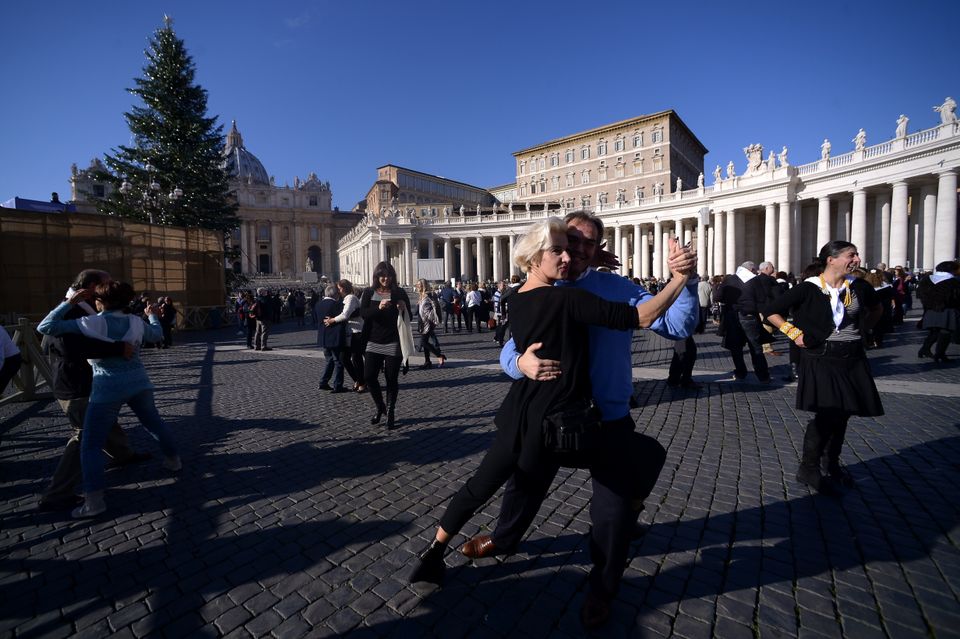