"Following Francis" is a monthly blog on the latest happenings of Pope Francis. It is prepared exclusively for The WorldPost by Sébastien Maillard, Vatican correspondent for La Croix, Rome.
Advertisement

BANGUI, Central African Republic -- The highlight of Pope Francis' journey in Africa was, on Nov. 30, his morning visit to a mosque in Bangui, the capital of the Central African Republic, where Christian and Muslim militias have been fighting each other over nearly the past three years. His presence in the besieged, dangerous PK5 district was meant to show that the bounds of brotherhood between communities remain possible despite all the bloodshed.

"Christians and Muslims are brothers and sisters. We must therefore consider ourselves and conduct ourselves as such," he clearly stated in his speech inside the mosque. "Christians, Muslims and members of the traditional religions have lived together in peace for many years," he said, calling to mind, "the many acts of solidarity which Christians and Muslims have shown with regard to their fellow citizens of other religious confessions." Tidiani Moussa Naibi, the imam of the mosque welcoming the pope, expressed the same attitude and commitment in his welcoming address.

Imam on board the pope mobile

After the speeches, Francis asked the imam to show him where the mihrab was, as it indicates in a mosque the direction of Mecca, towards which Muslims pray. Both of them stood in front of it and prayed there, side by side in silence. The pope later explained to the press he had also invited the imam on board his pope mobile to tour together.

The day just before the visit, in the cathedral of Bangui, the head of the Catholic Church made another symbolic gesture of sympathy towards the Muslim community. He stepped down from the altar during mass to give peace to another imam, Oumar Kobine Layama, who was standing in the front row. This imam, along with the Catholic archbishop of Bangui, Mgr. Dieudonné Nzapalainga, and an Evangelical pastor, Nicolas Guerekoyame-Gbangou, all stood together to try to downplay the hatred between communities and bring them back together.

They're called the "three saints of Bangui." The first purpose of Francis' risky visit in war-torn Central Africa was to foster their work. He did this not just for the sake of the country but as a signal to the world at a time when violence from the so-called Islamic State and other Islamist terrorist groups are creating mistrust and conflict between faith-based communities, thus depicting religions as causes of war. The pope's trip coincidently followed the ISIS-claimed Paris attacks, as well as the recent ones that occurred in Beirut and Tunis. 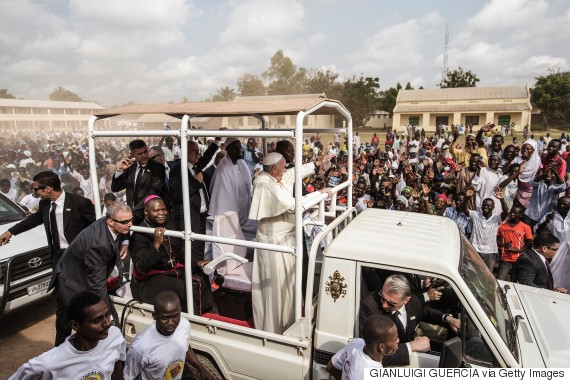 Pope Francis waves as he visits the Koudoukou school, to meet people from the muslim community, after leaving the Central Mosque in the PK5 neighborhood.

"One cannot write off a religion because there are some groups -- or sometimes many groups -- of fundamentalists," he explained to the press on his return flight from Bangui. "How many wars, and not only wars of religion, have we Christians waged? The Muslims were not responsible for the sack of Rome!" He continued, "[Muslims] have values, and these values are constructive ... One can dialogue with them."

Interreligious dialogue is key in this pontificate. Just a year before praying in the main mosque of Bangui, the pope did just the same in Istanbul, at Sultan Ahmet Mosque. His journeys to Jerusalem, Albania, Sri Lanka and later to Bosnia were all meant to convey that pacifist coexistence in multicultural societies remains possible through deep interreligious dialogue.

This dialogue, from the pope's view, doesn't mean endless debates limited to a few theologians. Francis prefers concrete project-based cooperation at all levels, especially grassroots, involving and benefitting all in the community. "The shared recognition of the sanctity of each human life is the basis of joint initiatives of solidarity, compassion and effective help directed to those who suffer most," he explained at a meeting with religious leaders in Ankara, Turkey a year ago.

In Francis' understanding, such initiatives not only support the needy but also change mutual perception among those who implement them. He believes a deep, respectful and credible relationship between Muslims and Christians, and more widely between all believers and people of good will, does not come out of colloquiums but through common field work and shared struggles in the social sphere, where believers from all walks of life get to know each other more closely and perhaps start true friendship.

His presence was meant to show that the bounds of brotherhood between communities remain possible despite all the bloodshed.


This long-term work will not as such impress ISIS, of course. As the pope's top diplomat, Cardinal Pietro Parolin, confirmed in an interview granted to the French daily La Croix after the Paris attacks: "It is licit to stop the unjust aggressor." But Cardinal Parolin also says disarming by means of military intervention is not enough. In the long run, it also requires a "global spiritual mobilization."

Bangui as the world's spiritual capital

This is precisely why Francis fosters interreligious collaboration: to prevent religious fundamentalism. "All too often, young people are being radicalized in the name of religion to sow discord and fear and to tear at the very fabric of our societies," he warned in Nairobi, Kenya, at the beginning of his African tour.

Addressing a variety of religious leaders, he said, "How important it is that we be seen as prophets of peace, peacemakers who invite others to live in peace, harmony and mutual respect! Interreligious dialogue is not something extra or optional but essential, something which our world, wounded by conflict and division, increasingly needs."

Francis declared that Bangui was, for the day, the "spiritual capital of the world." He believes that the interreligious cooperation happening in the city can prevail over the religious divisions. He wants it to set an example for the world.


How the World Looks Through the Pope's Glasses
No Room for Decadent 'Princes' in Francis' Vatican
A Day in the Life of Pope Francis, Who Lives Behind This Gas Station
Moving the Church Forward on the Modern Family, One Step at a Time
How the Pope's 'Shock-the-Yankee' Attitude Got Rave Reviews in the U.S.
Is There Life After the Pontificate for Francis?