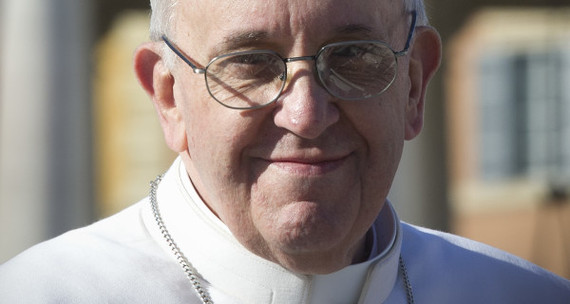 Pope Francis recently completed a triumphal visit to the United States where he addressed a joint meeting of the U.S. Congress, the United Nations, and many other sites where Catholics and non-Catholics alike welcomed his message of tolerance, inclusiveness, and social justice. The Pope has been especially clear and vocal about his views of climate change as a real, pervasive, and devastating factor in today's world and that our understanding and response to the problem is essential to the future survival of all people worldwide.

These ideas were first introduced in the encyclical and we have discussed them before. That document speaks generally about deep reverence for and the active conservation of Nature as a preeminent perspective of the Catholic Church, but it also speaks very specifically about aspects of the ocean. Our friends at Climate Progress have provided a selection of direct quotations from the encyclical that constitute a series of warnings of which we should all be aware.

Concerning The Polar Plight: "The melting in the polar ice caps and high altitude plains can lead to dangerous release of methane gas, while the decomposition of frozen organic material can further increase the emission of carbon dioxide."

Concerning Sea Level Rise: "A rise in sea level...can create extremely serious situations, if we consider that a quarter of the world's population lives on the coast or nearby, and that the majority of our megacities are situated in coastal areas."

Concerning Ocean Acidification: "Carbon dioxide pollution increases the acidification of the ocean and compromises the marine food chain. If the present trends continue, this century may witness...an unprecedented destruction of ecosystems, with serious consequences for all of us."

Concerning Ocean-Bound Water Pollution: "Underground water sources in many places are threatened by the pollution in certain mining, farming, and industrial activities, especially in countries lacking adequate regulation or controls. It is not only a question of industrial waste. Detergents and chemical products, commonly used in many places of the world, continue to pour into our rivers, lakes, and seas."

Concerning Over-fishing and Seafood By-catch: "Marine life in rivers, lakes, seas, and oceans, which feeds a great part of the world's population, is affected by uncontrolled fishing, leading to a drastic depletion of certain species. Particularly threatened are marine organisms which we tend to overlook, like some forms of plankton; they represent a significant element in the ocean food chain, and species used for our food ultimately depend on them."

Concerning Loss of Marine Biodiversity: "In tropical and subtropical seas, we find coral reefs comparable to the great forests on dry land, for they shelter approximately a million species, including fish, crabs, mollusks, sponges and algae. Many of the world's coral reefs are already barren or in a state of constant decline... Wetlands converted to cultivated land lose the enormous biodiversity which they formerly hosted. In some coastal areas the disappearance of ecosystems sustained by mangrove swamps is a source of serious concern."

We have addressed all these critical issues before, but it does great good to repeat them again and again lest we forget amidst the deluge of other problems that face in the world today. As leader and exemplar, Francis asks us to answer these questions: What makes the ocean different or more important in the larger context of violence and deprivation around us? Why should we focus on it, rather than all the terrible problems on land?

My response is that the ocean transcends the exigencies of the modern life, represents the future -- that it exists for us all beyond the present moment or crisis, that it is the essential system that implies possibility, portends solution, and offers a way forward that will provide for us whether or not we believe ourselves to be the creatures of any God. Francis embodies welcome and portrays a scape of comparable openness, offers a non-judgmental embrace, and voices an optimism founded on fundamental moral principles, on what is wrong and what is right. If we are alienated to and on the land, he suggests, then our reconciliation and redemption must be found elsewhere. Why not immerse ourselves in the nurturing ocean and find solace and a viable future in the provident sea?