Pope Francis appeared on Wednesday to back Native Americans seeking to halt part of the Dakota Access Pipeline, saying indigenous cultures have a right to defend “their ancestral relationship to the earth”.

The Latin American pope, who has defended indigenous rights on several occasions since his election in 2013, made his comments on protection of native lands to representatives of tribes attending the Indigenous Peoples Forum in Rome.

While he did not name the pipeline, he used strong and clear language applicable to the conflict, saying development had to be reconciled with “the protection of the particular characteristics of indigenous peoples and their territories.”

Francis spoke two days after a U.S. federal judge denied a request by tribes to halt construction of the final link of the project that sparked months of protests by activists aimed at stopping the 1,170-mile line.

Speaking in Spanish, Francis said the need to protect native territories was “especially clear when planning economic activities which may interfere with indigenous cultures and their ancestral relationship to the earth”.

The Standing Rock Sioux and Cheyenne River Sioux tribes have argued the project would prevent them from practicing religious ceremonies at a lake they say is surrounded by sacred ground.

“In this regard, the right to prior and informed consent (of native peoples) should always prevail,” the pope said, citing the 1997 U.N. Declaration on the Rights of Indigenous Peoples.

Thousands of tribe members, environmentalists and others set up camps last year on Army Corps land in the North Dakota plains as protests intensified.

In December, the administration of former U.S. President Barack Obama denied the last permit needed by Energy Transfer Partners, which is building the $3.8 billion pipeline.

But last week, the U.S. Army Corps of Engineers granted a final easement, after President Donald Trump issued an order to advance the project days after he took office in January.

After the Trump’s inauguration, Francis said he was willing to “wait and see” how Trump acts before forming an opinion of the new president. But over the past few weeks, Francis made several statements that seem to oppose Trump’s tactics.

The pope made an indirect criticism last week of another Trump project, a wall along the border with Mexico, saying Christians should not create “walls but bridges” and shouldn’t ask others to pay for them.

Francis’ prayer intentions for February call on Catholics to “welcome the needy” and criticizes people who “throw up skyscrapers” and “strike big real estate deals” but ignore those on the margins of society.

Francis, who wrote a major encyclical letter in 2015 on climate change and the environment, told the group that new technologies could be legitimate but had to respect the earth.

The protests against the Dakota Access Pipeline have been driven by spirituality from the start. Christian, Jewish, Muslim, and leaders of other faiths gathered numerous times at Standing Rock last year for prayers and interfaith ceremonies ― including members of the Catholic order, the Sisters of Mercy of the Americas.

The Huffington Post’s Carol Kuruvilla contributed to this report.

PHOTO GALLERY
Why These Interfaith Activists Are Standing With Standing Rock

Pope Francis: Don't Build Anything On Native Lands Without Consent
Why These Interfaith Activists Are Standing With Standing Rock 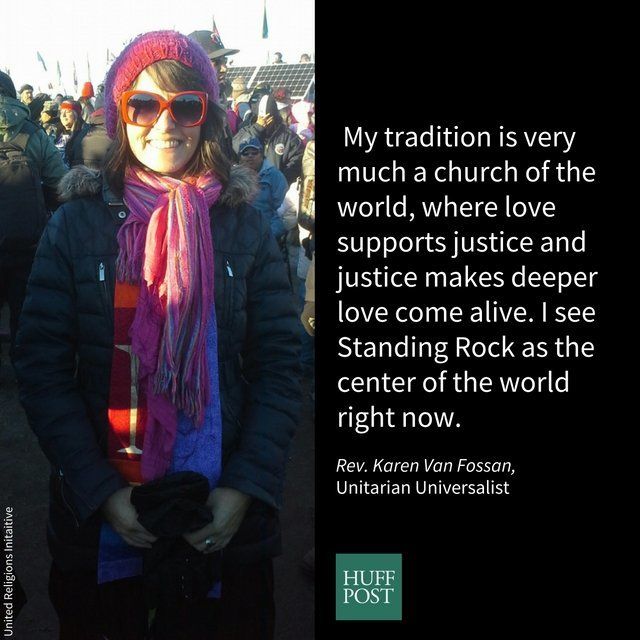 1 / 9
Rev. Karen Van Fossan
I'm the minister of the Unitarian Universalist congregation in Bismarck, ND. I'm honored to stand with Standing Rock. My tradition is very much a church of the world, where love supports justice and justice makes deeper love come alive. I see Standing Rock as the center of the world right now. I'm grateful to the people of Oceti Sakowin camp for sharing this center with me.
United Religions Initaitive