When Pope Francis visits Our Lady Queen of Angels Catholic School in East Harlem on Sept. 25, he'll get the chance to chat with 24 lucky kids.

The third and fourth graders, chosen for their public speaking skills and then by a lottery, come from Our Lady Queen of Angels, St. Ann School, St. Charles Borromeo School and St. Paul School. OLQA is part of the Partnership for Inner-City Education, a school management organization that works with the Catholic Archdiocese of New York. The other three schools are managed by the Manhattan Region of the Archdiocese of New York.

About 99 percent of the more than 2,000 students enrolled in Partnership schools are minorities and 33 percent speak English as a second language, according to the organization.

When school starts this fall, students will be working on lessons and projects that align with Pope Francis' interests. Students from St. Ann will be planting flowers around their school, reflecting the pontiff's love for the environment. Students from St. Paul will be spending extra time working on understanding the Holy Eucharist.

Third and fourth grade is a special time in a child's life because they are curious and full of wonder, said the OLQA's principal Joanne Walsh.

HuffPost Religion asked six students, all of whom were chosen to meet the Pope, what they'd like to tell Francis in September. Here's what they said.

Noah Rodriguez is a fourth grader from St. Ann School. His principal, Hope Mueller, said that he recently made a speech to his classmates, encouraging everyone to clean up and replant the flower beds outside of his school.

"I'm going to tell him that it's an honor to meet him and talk about my project with him... My project was to plant flowers around the trees in the flower beds in front of our school, to make our school community beautiful," he said.

Maziya Clemente is a fourth grader from St. Ann School. She comes from a Catholic family and lives in West Harlem. Her favorite subject is Math.

"I'm going to ask Pope Francis why did he give his motorcycle to charity?" she said.

Farida Mintoumba is a fourth grader who attends St. Charles Borromeo School. She says her family is from Togo. She's the first person in the family to be born in America.

"I'm going to tell him about thanking God for the gifts of the earth," Mintoumba said.

Essa Nahshal is a third grader from St. Charles Borromeo. He and his family are Muslims. The school's principal, Ms. Aleeya Francis, said that only 27 percent of the students in her school are Catholic.

Nahshal said he wants to know, "How did [Pope Francis] get from Argentina to Italy?"

Allison Reyes-Rodriguez is a third grader from Our Lady Queen of Angels. She said she believes Pope Francis is a "great man" and that he's a "really smart man."

Nicholas Marronaro is a fourth grader from Our Lady Queen of Angels and he likes to play video games. His favorite classes are math and science. Marronaro has several questions lined up to ask Pope Francis.

Pope Francis, these kids are ready for you!

Correction: ﻿﻿A previous version of this article suggested that all four participating schools are part of the Partnership Network. Our Lady Queen of Angels is a Partnership Network School, but St. Ann, St. Paul and St. Charles Borromeo are managed by the Manhattan Region of the Archdiocese of New York.

﻿﻿Correction: ﻿﻿A previous version of this article suggested that all four participating schools are part of the Partnership Network. Our Lady Queen of Angels is a Partnership Network School, but St. Ann, St. Paul and St. Charles Borromeo are managed by the Manhattan Region of the Archdiocese of New York. 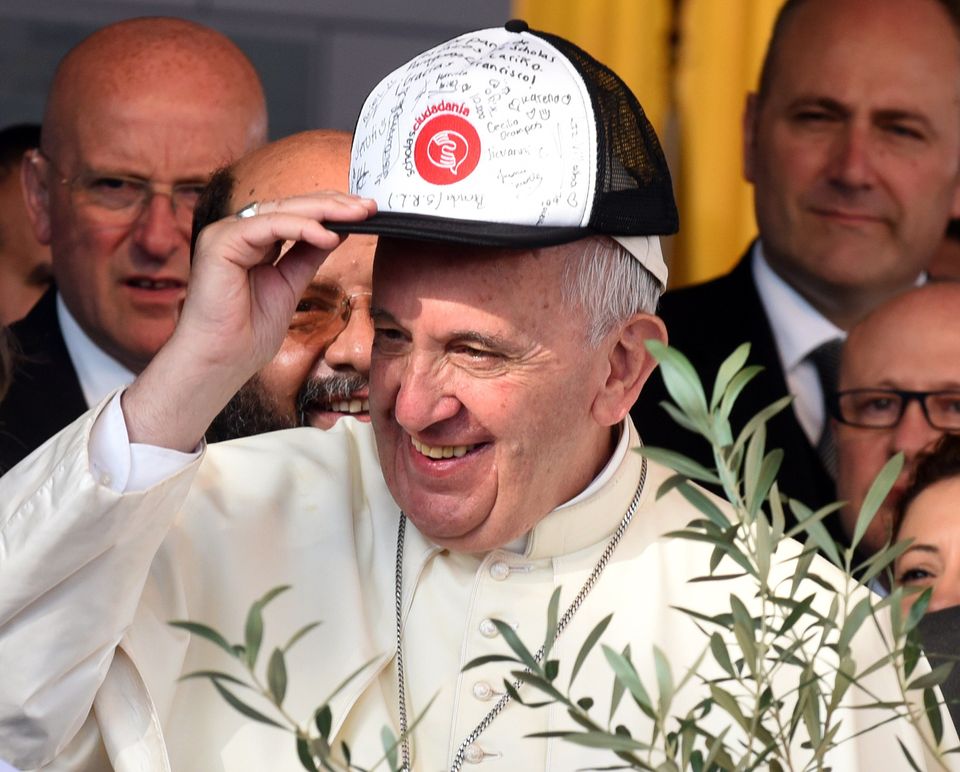 1 / 7
That time he rocked a baseball cap signed by the residents of one of Paraguay's poorest neighborhoods.
Credit: Norberto Duarte/Getty Images