VATICAN CITY (AP) - Pope Francis baptized 10 people Saturday and urged them to bring their faith "to the ends of the Earth" as he presided over an Easter Vigil in St. Peter's Basilica.

The vigil is among the Vatican's most solemn services. Francis entered the darkened basilica with a lone candle, which he then shared with others to slowly illuminate the church. The symbolic service commemorates the darkness of the faithful over the crucifixion of Jesus Christ on Good Friday and their joy and light at his resurrection on Easter Sunday.

Francis urged the priests, bishops, cardinals and ordinary Catholics gathered for the late night service to remember when they first found their faith. "Do I remember it? Have I forgotten it? Look for it. You'll find it. The Lord is waiting."

Trying to remember isn't an act of nostalgia but rather a way to bring the "fire" of faith "to all people, to the very ends of the Earth," he said.

After his homily, Francis proceeded to baptize each of the 10, starting with Italian brothers Giorgio and Jacopo, aged 8 and 10. "Do you want to be baptized?" he asked each one as he smiled.

He asked the same of the adult converts, who hailed from Vietnam, Belarus, Senegal, Lebanon, Italy and France.

It was the second late night for Francis after the long Good Friday Way of the Cross procession at Rome's Colosseum. Francis, 77, will get a few hours of rest before celebrating Easter Sunday Mass in the flower-strewn St. Peter's Square.

He then has a week to prepare for the other major celebration of this year's Easter season: the April 27 canonizations of Pope John XXIII and John Paul II. Hundreds of thousands of people are expected to attend.

"The Gospel of the resurrection of Jesus Christ begins with the journey of the women to the tomb at dawn on the day after the Sabbath. They go to the tomb to honour the body of the Lord, but they find it open and empty. A mighty angel says to them: "Do not be afraid!" (Mt 28:5) and orders them to go and tell the disciples: "He has been raised from the dead, and indeed he is going ahead of you to Galilee" (v. 7). The women quickly depart and on the way Jesus himself meets them and says: "Do not fear; go and tell my brothers to go to Galilee; there they will see me" (v. 10).

After the death of the Master, the disciples had scattered; their faith had been utterly shaken, everything seemed over, all their certainties had crumbled and their hopes had died. But now that message of the women, incredible as it was, came to them like a ray of light in the darkness. The news spread: Jesus is risen as he said. And then there was his command to go to Galilee; the women had heard it twice, first from the angel and then from Jesus himself: "Let them go to Galilee; there they will see me".

For each of us, too, there is a "Galilee" at the origin of our journey with Jesus. "To go to Galilee" means something beautiful, it means rediscovering our baptism as a living fountainhead, drawing new energy from the sources of our faith and our Christian experience. To return to Galilee means above all to return to that blazing light with which God’s grace touched me at the start of the journey. From that flame I can light a fire for today and every day, and bring heat and light to my brothers and sisters. That flame ignites a humble joy, a joy which sorrow and distress cannot dismay, a good, gentle joy.

In the life of every Christian, after baptism there is also a more existential "Galilee": the experience of a personal encounter with Jesus Christ who called me to follow him and to share in his mission. In this sense, returning to Galilee means treasuring in my heart the living memory of that call, when Jesus passed my way, gazed at me with mercy and asked me to follow him. It means reviving the memory of that moment when his eyes met mine, the moment when he made me realize that he loved me.

Today, tonight, each of us can ask: What is my Galilee? Where is my Galilee? Do I remember it? Have I forgotten it? Have I gone off on roads and paths which made me forget it? Lord, help me: tell me what my Galilee is; for you know that I want to return there to encounter you and to let myself be embraced by your mercy.

The Gospel of Easter is very clear: we need to go back there, to see Jesus risen, and to become witnesses of his resurrection. This is not to go back in time; it is not a kind of nostalgia. It is returning to our first love, in order to receive the fire which Jesus has kindled in the world and to bring that fire to all people, to the very ends of the earth. 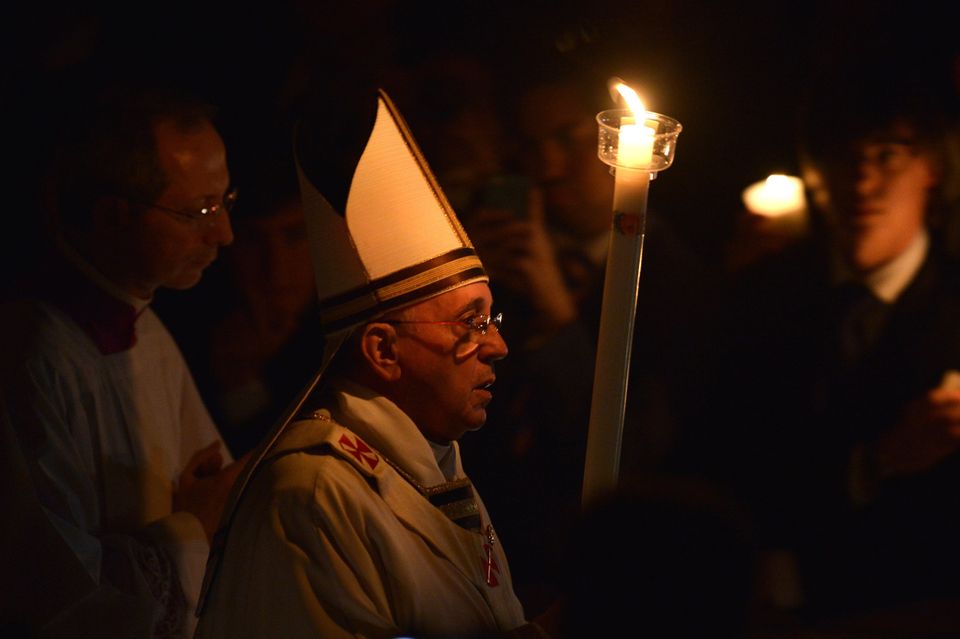