Pope Francis is taking a cue from his namesake -- St. Francis of Assisi -- for the title of his upcoming encyclical on the environment.

The Pope's encyclical, or teaching document, will be titled, “Laudato Si,” or “Praised Be,” the Catholic News Service reported. The line is a phrase from St. Francis’ renowned “Canticle of Creatures."

The pontiff's reported title choice was accidentally revealed by Father Giuseppe Costa -- the head of the Vatican’s publishing house -- who let it slip during an awards ceremony on May 30 in Naples, according to the Catholic News Agency . The Vatican press office has not confirmed the title, and did not immediately respond to a request for comment from The Huffington Post.

The encyclical is due to be released on June 18, in anticipation of the United Nations climate change conference in Paris later this year. Francis’ predecessors have addressed environmental issues before, but he will be the first pope to talk about global warming in an encyclical, according to the Associated Press.

The pope chose St. Francis of Assisi as his namesake at the start of his papacy because the saint's values reflected his own. He described the saint as a “man of peace, a man of poverty, a man who loved and protected creation,” according to the Catholic Herald.

St. Francis is the patron saint of animals and ecologists, an honor that reflected his love for nature. In his canticle, St. Francis thanks God for the gifts of creation, which he personifies as living members of his own family. He also showers praise on Sisters Moon, Water and Earth, and Brothers Sun, Wind, Air and Fire.

Rev. Regis J. Armstrong, a professor at The Catholic University of America and an expert on St. Francis, told HuffPost in an email that this canticle is one of the best insights into the saint's vision for life. It is crucial to grasping how St. Francis understood the message of the gospel -- and may offer a glimpse into Pope Francis' own vision for the world.

St. Francis’ "Laudato Si" "challenges rhetoricians and poets, whomever, to come to grips with the realities of the inter-connectedness of the created, human, and divine family," said Armstrong.

CORRECTION: A previous version of this article misattributed a description of Saint Francis’ "Laudato Si" to the pope's upcoming encyclical. 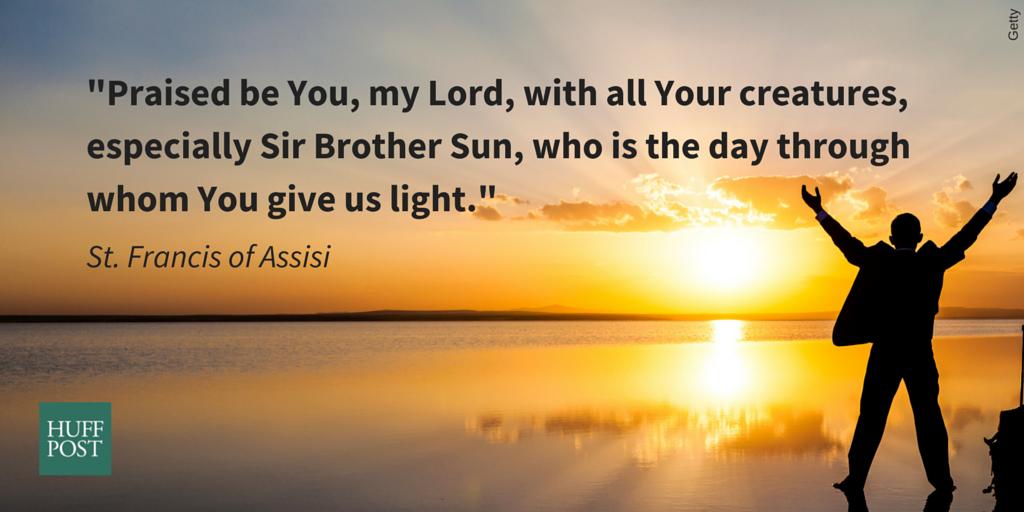 Pope Francis Draws From St. Francis Of Assisi For The Title Of His Upcoming Encyclical: Reports
Pope Francis' Best Photos