By Philip Pullella and Benet Koleka

TIRANA, Albania, Sept 21 (Reuters) - Pope Francis, in his strongest criticism of Islamist militants to date, said on Sunday no religious group which used violence and oppression could claim to be "the armor of God."

Francis made his comments during a one-day visit to Albania, an impoverished Balkan country hailed by the pontiff as a model of inter-faith harmony because of good relations between its majority Muslim community and its Christian denominations.

"Let no one consider themselves the 'armor' of God while planning and carrying out acts of violence and oppression," he said in the presidential palace in Tirana, responding to an address by Albanian President Bujar Nishani, who is Muslim.

"May no one use religion as a pretext for actions against human dignity and against the fundamental rights of every man and woman, above all to the right to life and the right of everyone to religious freedom," he said.

Francis, on his first trip as pope to a European country outside Italy, made no direct reference to Islamic State militants who have seized territory in Syria and Iraq, but it was clear he had events in the Middle East in mind.

About 70,000 Syrian Kurds have fled into Turkey since Friday as Islamic State militants seized dozens of villages close to the border. A Kurdish politician from Turkey said local people had told him the militants were beheading people as they went from village to village.

Islamic State has declared a "caliphate" in the territories they control and have killed or driven out large numbers of Christians, Shi'ite Muslims and others who do not subscribe to their hardline version of Sunni Islam.

Asked specifically about Islamic State last month when returning from a trip to South Korea, Francis endorsed action by the international community to stop "unjust aggression."

In Tirana, Francis lauded the mutual respect and trust between Muslims, Catholics and Orthodox Christians in Albania as a "precious gift" and a powerful symbol in today's world.

"This is especially the case in these times where an authentic religious spirit is being perverted by extremist groups and where religious differences are being distorted and instrumentalised," said Francis.

The pope said a Mass before some 250,000 people in a square in central Tirana named after the late Mother Teresa of Calcutta, an ethnic Albanian who is a national heroine.

Both the Vatican and Albanian officials dismissed media reports of concern for the pope's safety. Security appeared normal for a papal trip overseas and in some places lighter than in some previous trips.

Some 60 percent of all Albanians are Muslim, while Roman Catholics account for just 10 percent of the population.

The pope returned to the theme of tolerance during a meeting with leaders of other religions, telling them that "all those forms which present a distorted use of religion must be firmly refuted as false ..."

Earlier, aboard the plane taking him on the short trip across the Adriatic from Rome to Tirana, Francis said he wanted to visit Albania because it had "suffered very, very much." He is the first pope to visit Albania in 21 years.

The late communist dictator Envier Hoxha banned religion in 1967, driving Albania's Roman Catholic, Orthodox and Muslim faithful alike underground in his drive to create what he boasted was the world's first atheist state.

Nearly 2,000 churches, Orthodox and Catholic, were destroyed under Hoxha, whose paranoid rule lasted four decades until his death in 1985. Many were turned into cinemas or dancing halls.

More than 100 Catholic priests or bishops were executed or died under torture or in labor camps. Just 30 survived in what Francis referred to in his address as "a winter of isolation and persecution."

At a vespers service on Sunday night in Tirana's cathedral, the pope wiped a tear from his eye when an 84-year-old priest, Ernest Troshani, described how he had spent nearly 30 years in prison or forced labor in mines, during which he was told by his captors that he was up next for execution as an enemy of the state.

The pope was so moved that he kissed the man's hand, put aside his prepared address, and delivered an impromptu sermon. "Today, here, we have touched martyrs," he said. (Writing by Philip Pullella; Editing by Gareth Jones and Kevin Liffey) 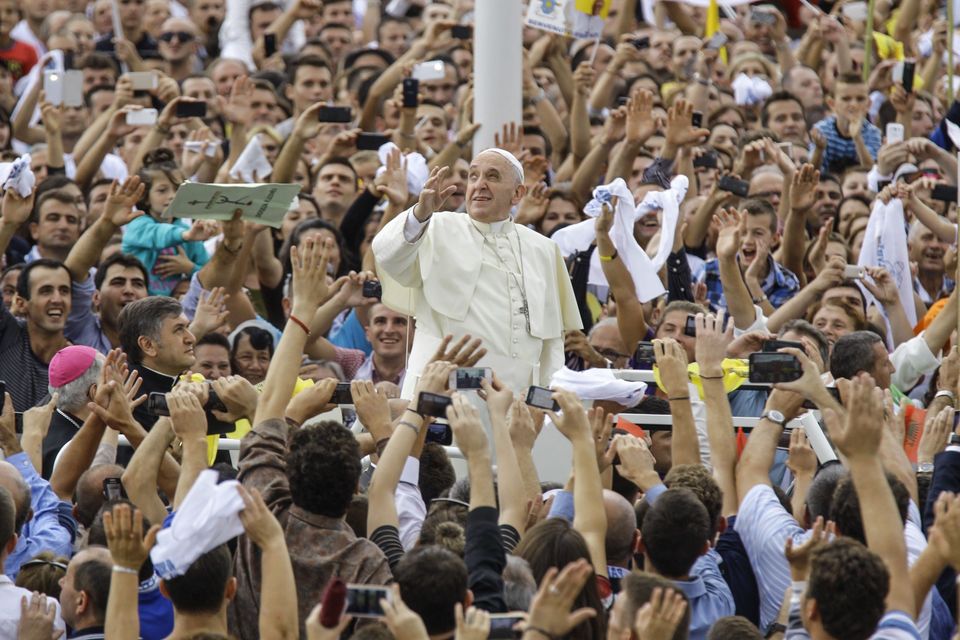