In the frenetic hour between the moment when the white smoke first appeared and the new pope finally debuted on the balcony, the name 'Bergoglio' never came up.

When the now familiar face of the Cardinal from Buenos Aires appeared I found myself shouting at the screen: "who is that?" And soon we knew: Pope Francis, the new leader of 1.1 billion Roman Catholics; and potentially the most transformative pope the church has seen in 50 years.

The last few days have provided a series of important moments which are worth reviewing to understand why Pope Francis is getting such well deserved praise and is the object of such fervent, if guarded, hope.

To start, the choice of the name Francis is stunning. If you work in the field of religion you know there are a few spiritual figures from each religion that inspire universal praise -- Rumi in Islam, Maimonides in Judaism, Vivekananda in Hinduism, and always on the list is St. Francis of Assisi.

The 13th century ascetic is known not only for is concern for the poor, but also but for his connection with the environment; his interfaith outreach to Muslims; his famous prayer life, as well as a quote that St. Francis may or may not have said, that is nonetheless attributed to him: 'Preach the Gospel at all times, and if necessary, use words.'

So far we have seen Pope Francis truly take inspiration from his namesake. In an audience with the press he said that he hopes for a 'poor church and a church for the poor.' He has urged his fellow Argentinians not to fly over to attend his official installment on Tuesday, but rather give the money they would have spent to the poor; continuing a reputation of concern for the poor that he developed in Argentina. A theological conservative, Bergoglio was an opponent of liberation theology, yet he has made statements that in the United States would certainly elicit charges of class warfare such as an address in 2007: "The unjust distribution of goods persists, creating a situation of social sin that cries out to Heaven."

In his first 24 hours, Pope Francis reached out to the Jewish community in Rome, and in a press conference instead of an explicitly Catholic blessing he offered a silent one for all attending -- apparently out of respect for people present of other faiths and no faith. Pope Francis is signaling that he recognizing the importance of interfaith relations and secular dialogue in the 21st century. And in a stunning move, the Ecumenical Patriarch of the Constantinople announced he will attend the papal inauguration mass for the first time since the schism in 1054!

More than anything, Vatican watchers have recognized an entirely new style emerging from Pope Francis -- namely a simplicity, and humility that, like the great quote, speaks the Gospel louder than words. Getting his own bags from his hotel, facing the Cardinals during a simple celebration of the mass (notable for those who might have been hoping for a return of pre-Vatican II liturgy), a single hand raised on the balcony rather than arms grandly outstretched. All of this speaks to a Christian witness as way of life rather than a collection of dogma.

However, I don't want to whitewash the valid concerns about the new pope. There are important questions about his role in Argentina's 'dirty war.' I have been reading everything I can about it over the last few days and from what I can gather, the then Bergoglio was neither villain nor hero. Or maybe he was both. The sister of Orlando Yorio, one of the priests who was kidnapped and tortured for five months by the military government and who has since died told the BBC: "I see a lot of joy and celebration for Pope Francis, but I'm living his election with a lot of pain." However, Nobel Prize winner Perez Esquivel told BBC Mundo: "There were some bishops who were in collusion with the military, but Bergoglio is not one of them."

Also of serious concern to the LGBT community are the harsh words that Cardinal Bergoglio used in 2010 to fight against gay marriage and adoption including calling gay adoption a form of discrimination against children and gay marriage a destructive work on God's plan. As someone who is 'gay married' myself, I have to say that, of course, this is ridiculous and harmful. As one HuffPost religion blogger suggested, hopefully Cardinal Bergoglio has seen that for the last two years, Argentina has had same sex marriage and that the sky has not fallen and, in fact, people are experiencing more love and stability and compassion in their lives -- surely Jesus approves.

What is also true is that it would have been very hard to find a Cardinal in the bunch (maybe excepting Cardinal Schoenborn) who had not taken a public stance against gay marriage. Full acceptance of LGBT people is a place where the hierarchy just hasn't gotten to yet, even if the Catholics in the pews in the United States have. And yet I have hope.

Listening to the Cardinals over the last few days it has been clear that they themselves are surprised by the result of the conclave and they continue to give credit to the Holy Spirit for the choice of Pope Francis. So far it certainly seems like an inspired choice and the entire world prays with Catholics that this papacy will be a blessing on the Catholic Church will usher in more peace, equality, justice and joy for people of all faiths and no faiths around the globe. 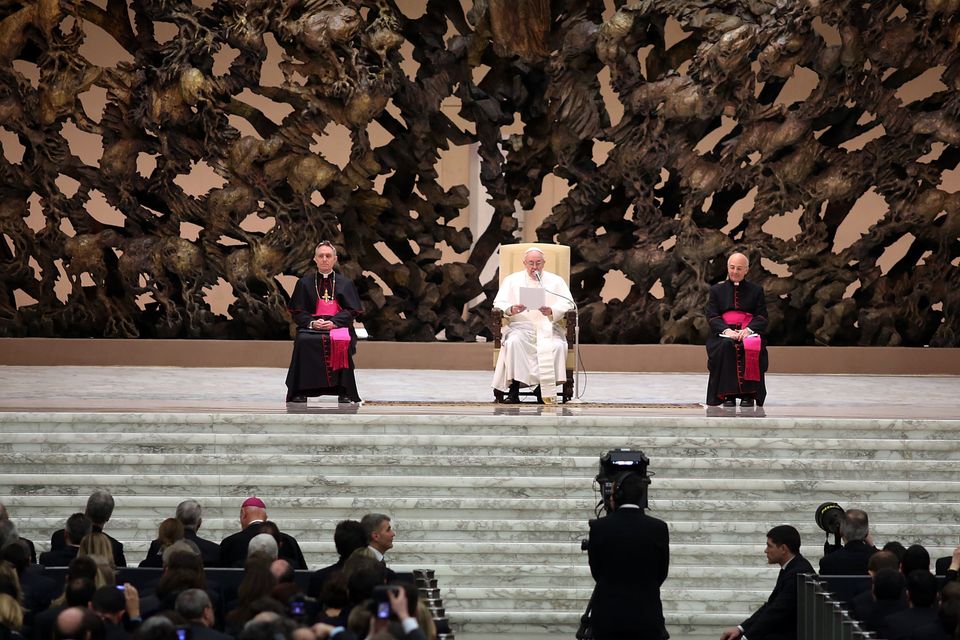 1 / 17
Pope Francis Holds An Audience With Journalists And The Media
VATICAN CITY, VATICAN - MARCH 16: Newly elected Pope Francis speaks as he holds his first audience with journalists and media inside the Paul VI hall on March 16, 2013 in Vatican City, Vatican. The pope thanked the media for their coverage during the historic transition of the papacy and explained his vision of the future for the Catholic Church. Tomorrow tens of thousands of faithful are expected in St Peter's Square as Pope Francis delivers his first Angelus Blessing from the window of his private apartment in the Vatican. (Photo by Spencer Platt/Getty Images)
Getty Images