Bergoglio was a high-ranking official in the Society of Jesus of Argentina when a military junta was installed in the South American country in 1976. According to the Los Angeles Times, priests Orlando Yorio and Francisco Jalics were kidnapped in May of that year by the navy. "They surfaced five months later, drugged and seminude, in a field," the Times reported. A 2005 lawsuit accused Bergoglio of unspecified involvement in the abductions. Reuters explains that "the military government secretly jailed [Yorio and Jalics] for their work in poor neighborhoods."

A spokesman for Bergoglio called the claims "old slander."

According to "The Silence," a book written by journalist Horacio Verbitsky, Bergoglio withdrew his order's protection of the two men after they refused to quit visiting the slums, which ultimately paved the way for their capture.

Verbitsky's book is based on statements by Orlando Yorio, one of the kidnapped Jesuits, before he died of natural causes in 2000. Both of the abducted clergymen survived five months of imprisonment.

"History condemns him. It shows him to be opposed to all innovation in the Church and above all, during the dictatorship, it shows he was very cozy with the military," Fortunato Mallimacci, the former dean of social sciences at the Universidad de Buenos Aires, once said.

Those who defend Bergoglio say there is no proof behind these claims and, on the contrary, they say the priest helped many dissidents escape during the military junta's rule.

Per the Associated Press, "Yorio accused Bergoglio of effectively handing them over to the death squads by declining to tell the regime that he endorsed their work. Jalics refused to discuss it after moving into seclusion in a German monastery." Bergoglio discussed the incident with Sergio Rubin, his authorized biographer.

Both men were freed after Bergoglio took extraordinary, behind-the-scenes action to save them, including persuading dictator Jorge Videla's family priest to call in sick so that Bergoglio could say Mass in the junta leader's home, where he privately appealed for mercy. His intervention likely saved their lives, but Bergoglio never shared the details until Rubin interviewed him for the 2010 biography.

Bergoglio told Rubin that he regularly hid people on church property during the dictatorship, and once gave his identity papers to a man with similar features, enabling him to escape across the border. But all this was done in secret, at a time when church leaders publicly endorsed the junta and called on Catholics to restore their "love for country" despite the terror in the streets.

Bergoglio testified about the matter in 2010 after twice refusing to appear in open court, but "his answers were evasive, human rights attorney Myriam Bregman said." 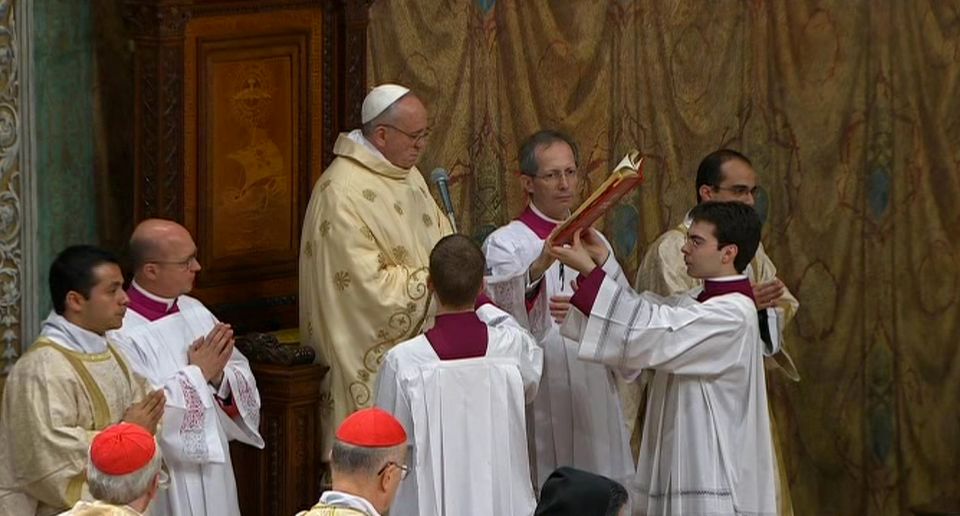 1 / 147
In this image made from video provided by CTV, Pope Francis, center left, celebrates his inaugural Mass with cardinals, inside the Sistine Chapel, at the Vatican, Thursday, March 14, 2013. As the 266th pope, Francis inherits a Catholic church in turmoil, beset by the clerical sex abuse scandal, internal divisions and dwindling numbers in parts of the world where Christianity had been strong for centuries. (AP Photo/CTV)
AP