VATICAN CITY (RNS) Seventy years after the U.S. dropped an atomic bomb on the Japanese city of Nagasaki, Pope Francis on Sunday (Aug. 9) described the bomb as a “lasting warning to humanity.”

Speaking to the faithful gathered in St. Peter’s Square, Francis recalled the “horror and repulsion” aroused by the twin bombings of Nagasaki on Aug. 9 1945, and Hiroshima, three days earlier.

“This (event) has become the symbol of mankind’s enormous destructive power when it makes a distorted use of scientific and technical progress,” he said.

More than 70,000 people were killed when U.S. forces dropped an atomic bomb on Nagasaki. The bomb that hit Hiroshima left an estimated 140,000 people dead.

The attacks marked a turning point in World War II, prompting Japan to surrender to the Allies, although Japanese civilians continued to suffer from disease and disability long after the bombings.

Reflecting on the legacy of the series of events, the pope said: “(It) serves as a lasting warning to humanity so that it forever rejects war and bans nuclear weapons and all arms of mass destruction.”

Francis marked the anniversary by renewing calls for global peace, appealing for dialogue in the place of violence.

“With war one always loses,” he said. “The only way to win a war is never to wage it.”

Diplomatic relations were formed between Japan and the Vatican in 1942, during the height of World War II. Nearly 40 years later, Pope John Paul II visited Hiroshima, where he read a peace message in Japanese and other languages. 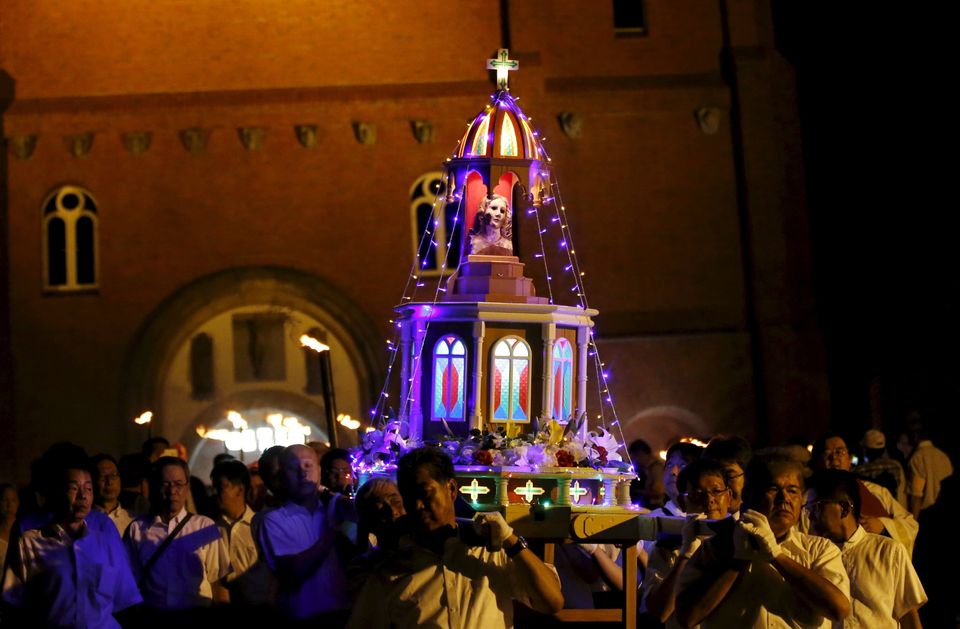 1 / 6
People march with the head of the atom-bombed statue of the Virgin Mary, from Urakami Cathedral for a peace march to the Peace Park in Nagasaki, western Japan, August 9, 2015, on the 70th anniversary of the bombing of Nagasaki. A bell tolled in Nagasaki on Sunday morning as the Japanese city marked 70 years since the dropping of the last atomic bomb on a civilian target in the closing days of World War Two. REUTERS/Toru Hanai
Toru Hanai / Reuters