This article was co-authored by Rebecca TeKolste. The original article appeared on UrbanWire.

Shining a light in dark places is the pope's job, or at least a job he is uniquely qualified to do.

On Sunday, Pope Francis will visit the Curran-Fromhold Correctional Facility (CFCF), a jail in Philadelphia. His visit will shine that light in a very dark place -- an overcrowded jail in a major US city.

Pope Francis's visit to CFCF has caught many domestic eyes, but it is not the first prison visited by the pontiff. Pope Francis has been concerned with criminal justice issues at least since he became an archbishop. He practices an annual tradition of foot washing each year on Holy Thursday that he began in Argentina and continued in Rome at the Casal del Marmo youth detention facility and with other marginalized populations.

The Philadelphia Prison System (PPS) jail Pope Francis will visit is a microcosm of jail in America: for the most part, it is overcrowded and decaying.

What research tells us about the PPS jail system

Among major US cities, Philadelphia has the highest jail populations per capita. And exposure to jail is remarkably common: about 30,000 men pass through CFCF each year.

PPS houses six facilities on its campus, and all are difficult places to do time. Some are relatively new, but on average, they are two generations old. One of the six, House of Corrections (HoC), was last renovated in 1927.

We spent several years studying PPS and conducted interviews in each of the then-five facilities. By contrast, we found CFCF to be relatively modern, relatively well-lit, relatively safe, and relatively humane by American jail standards.

We also found that half of the people cycling through PPS experience a single jail stay. The other half cycle through endlessly; over an eight-year period, on average, they were in the system on four separate occasions.

The system is persistently overcrowded. Though PPS was built to accommodate 6,500 people, the system currently houses closer to 8,200 inmates.

As the Pew data highlight, at no point in the last generation has the jail been under capacity--and the overcrowding has led to "triple-celling" inmates in cells designed for two. This practice reached a peak in 2009, when PPS housed over 3,000 inmates in triple cells. A class action lawsuit was filed in 2008, claiming that the conditions in PPS violated inmates' constitutional rights. The practice of triple-celling was discontinued in three facilities in September 2011, but remains at the other three, including CFCF and HoC. 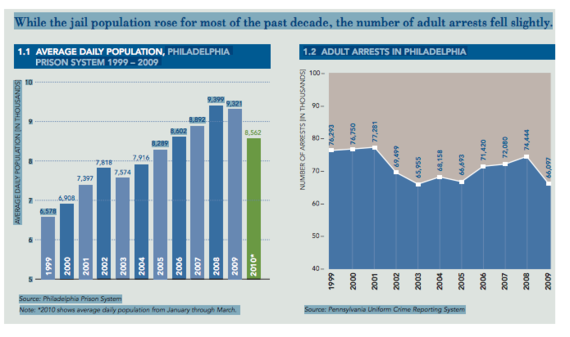 Overcrowding places a great strain on systems with already aging infrastructure and creates an environment that poses a risk to both inmates and staff. And the design is not conducive to direct supervision, where staff would directly interact with inmates and identify their mental health needs, victimization experiences, and emerging altercations before they worsen.

Reducing overcrowding is a critical step toward improving jail environments. Doing so requires jurisdictions to rethink who needs to be housed in jail and for how long.

Imprisoned without a conviction

In 2011, over 60 percent of all jailed people in the United States were being held pretrial. In CFCF, 80 percent are held without a conviction on the record for the current offense. Many are there simply because they can't afford bail, even though US (and international) law considers this to be analogous to debtors' prisons, which are roundly criticized as inhumane.

Worse still, the threat of staying in jail until their trial forces many arrested individuals to plead guilty to crimes they didn't commit to avoid pretrial jail time and to decrease their sentence if they are convicted.

Looking beyond the pope's visit

What's the bottom line? Really, there are three:

The light shone on PPS by the papal visit is critical. But there is much more to see.
Download
Calling all HuffPost superfans!
Sign up for membership to become a founding member and help shape HuffPost's next chapter
Join HuffPost