Inside the conclave, when Jorge Bergoglio was elected pope, the cardinal seated beside him whispered, "Don't forget the poor." When asked, "What name will you take?" he said, "I choose the name Francis, in honor of Saint Francis of Assisi."

The cardinals rose to their feet in applause.

One Vatican commentator said, "I was astonished at the boldness of it, because the name Francis is a whole program of governance in miniature." Years earlier, in a little known interview with an Argentine rabbi, Pope Francis had given his own capsule biography of Saint Francis.

"He brought to Christianity an entire new concept about poverty in the face of the luxury, pride and vanity of the civil and ecclesial powers of the time. He changed history."

Before greeting the public, Pope Francis was offered a red velvet cape with ermine trim, a jeweled cross, cufflinks and luxurious red shoes. The rumor around Rome was that he waved them away, saying, "That circus is over." But in reality his response was far simpler and humbler. He merely said, "I prefer not to."

At prayer in a dilapidated chapel, the young saint felt a Byzantine cross on the altar say to him, "Francis, repair my Church." He traveled on foot, begged and used all he collected to restore local churches. Years later, when St. Francis went to the Vatican for permission to found his order, he was turned away. But Pope Innocent III had a dream that the Lateran basilica was breaking apart. A humble man held the entire collapsing church together, bearing the weight of the falling walls on his shoulders. Realizing this was St. Francis, the pope called him back and approved his order. 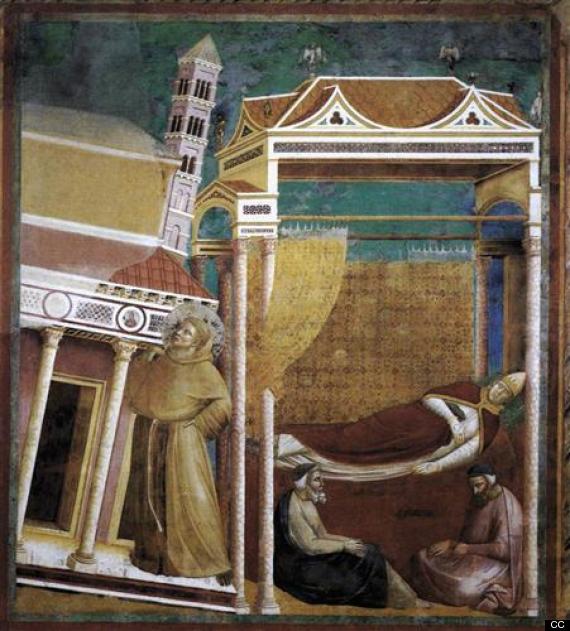 The first Franciscans devoted themselves to prayer and manual labor, giving all they could to the poor. As rector of the Colégio Máximo, Pope Francis filled his students' days with silent contemplation, mass, and community prayer. He founded a farm where he worked alongside them. It fed students and impoverished residents of the surrounding barrio alike. He sent his students out into the barrio, telling them the lesson he learned from a poor mother with many children who often asked for help. One night when he told her to return the next day, she said, "But Father, we're hungry now, and we're cold now." He gave her a blanket from his own bed.

St. Francis' message of poverty was so radical that as his own order grew, other Franciscans opposed him. When he wrote a new Franciscan Rule, it was destroyed by his opponents, who valued financial security and philosophical study over utter poverty. Pope Francis too was opposed for his radical simplicity. His farm was called an anti-intellectual boot camp, and he was deemed pre-modern for embracing the popular devotions of the poor.

But like St. Francis, Pope Francis remained dedicated to the poor. He told the story of a Roman prefect persecuting a church deacon, and demanding the church treasures. The deacon returned with a throng of faithful poor, saying, "These are the treasures of the church."

There are uncanny parallels between the lives of St. Francis and Pope Francis. Both suffered grave illnesses at age 22. Convalescence served as a time of spiritual reckoning; each emerged healed, and set on a divine path. They were sent away by the church hierarchy for their challenging views, but later welcomed back by the inmost circles of the Vatican.

Both looked to the heavens for poetic evocations of their faith. St. Francis wrote the beloved poem, "Canticle of the Sun." He calls the sun, in its brightness, beauty, radiance and splendor, a symbol of the divine, and writes:

Praised be my Lord, for sister moon and for the stars, In heaven Thou hast formed them clear and precious and fair.

On hearing this, Cardinal Schönborn, a kingmaker of the conclave, said aloud, "That's what we need."