Twenty years ago, author and psychiatrist M. Scott Peck gave a lecture in which he asserted that the biblical phrase "The Kingdom of God is within you" has been mistranslated and misunderstood throughout history. Dr. Peck said that if you go back to the original Aramaic, in which that piece of Scripture is written, what it actually says is: "The Kingdom of God is AMONG you." That is, the Kingdom of God is in community. "Wherever two or more are gathered, God is there."

I was reminded of this distinction while reading Pope Francis' recent pronouncements debunking trickle-down economics and refuting the "every person for him/herself" gospel of invisible-hand free market disciples. Pope Francis denounces such selfishness and self-interest. He exhorts us to care for our brothers and sisters -- to feed the hungry, tend to the sick and disabled, and provide shelter for the homeless -- just as Jesus did. Pope Francis reminds us that "we're all this together."

As we look at our country today, we see that there really are two Americas. One America believes in the ethos of individualism: the independent citizen, the rugged individual, the Lone Ranger who goes it alone. The other America believes in the ethos of community: the interdependent gathering of folks who know that "it takes a village" to raise a barn, to raise kids, and to raise a nation to greatness.

Our political leaders have the same disagreement. Republicans put their faith in the ability of individuals to take care of themselves: citizens can save for their own retirement, pay for their own health care, get a good education, and fail or succeed at business all on their own. They believe that personal initiative is all that's required for success and that poor people should pull themselves up by their own bootstraps. Their motto is: "I am not my brother's keeper."

President Obama and the Democrats put their faith in community. They believe that "no man is an island" and that an individual's actions always affect others. They understand that human beings are social creatures -- like dolphins, lions, elephants, ants, geese, penguins, monkeys, dogs and myriad other social animals, fish and birds. We thrive when we live in healthy interdependence with one another. We are built for community, collaboration, and cooperation.

Regarding the poor, the Democrats agree with Justice Thurgood Marshall: "None of us got where we are solely by pulling ourselves up by our bootstraps. We got here because somebody -- a parent, a teacher, an Ivy League crony, or a few nuns -- bent down and helped us pick up our boots." The Dems' motto is: "No one can do it for you, but you can't do it alone."

I am reminded of an ancient allegory that illustrates the difference between the GOP vision and the Democrats' vision for America:

A holy man was having a conversation with the Lord one day and said, "Lord, I would like to know what Heaven and Hell are like."

The Lord led the holy man to two doors. He opened one of the doors for the holy man to peer inside. In the middle of the room was a large round table, in the middle of which was a huge pot of stew that smelled delicious. But the people sitting around the table were emaciated, pale and sickly. They appeared to be famished. They each had spoons with very long handles splinted to their arms, but each found it impossible to reach into the pot of stew and take a spoonful because they could not get the long-handled spoons to their mouths. The holy man shuddered at the sight of their misery and suffering. The Lord said, "You have seen Hell."

The Lord took the holy man to the next room and opened the door. It was exactly the same as the first one, with a large round table, in the middle of which was a huge pot of stew that smelled delicious. The people's arms were splinted with the same long-handled spoons as the other room, but in this room, the people were well-nourished and healthy. They were all laughing and talking, as they took turns scooping up big spoonfuls of stew and then feeding each other.

The holy man turned to the Lord and said, "Oh, now I see the difference."

"Yes," said the Lord, "Here in Heaven, people have learned to feed each other ... while in Hell, people think only of themselves."

Pope Francis knows that Heaven is created in community. The Kingdom of God is among us. Will we heed his teachings? Are we ready to follow his example? Are we willing to love our neighbors as ourselves? 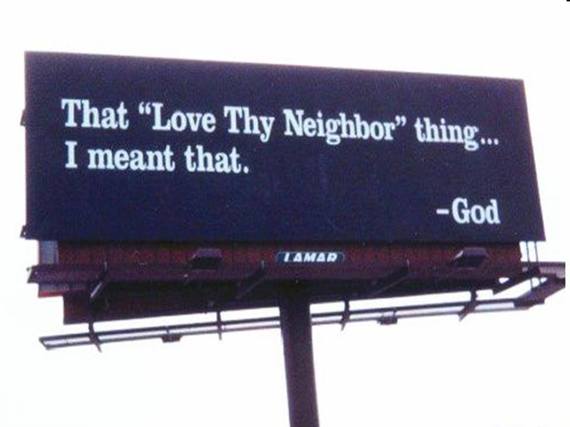 BJ Gallagher is a sociologist and the author of "If God Is Your Co-Pilot, Switch Seats" (Hampton Roads)