VATICAN CITY (RNS) Pope Francis will visit Turkey in November, eight years after his predecessor, Benedict XVI, made a landmark visit to the predominantly Muslim country.

Turkey’s newly elected president, Recep Tayyip Erdogan, extended a formal invitation to Francis, and the Turkish Embassy to the Holy See confirmed Tuesday (Sept. 9) that the pope has accepted.

“The pope has been invited by both the Orthodox Church and the government and he is expected to meet the president during his visit,” an embassy representative said.

Orthodox church officials in Istanbul said they expected the pope to attend a commemoration in honor of St. Andrew, one of Jesus’ disciples, whose feast day falls on Nov. 30. According to Orthodox tradition, Ecumenical Patriarch Bartholomew I, who leads the world’s 250 million Orthodox Christians, is the successor to Andrew.

Bartholomew personally invited the pope to visit Istanbul when the two religious leaders met in a historic encounter soon after the pope’s election in 2013. The two met again on Francis’ May trip to the Middle East and later for a peace prayer with the Israeli and Palestinian presidents in the Vatican gardens on June 8.

The patriarch was the first head of the Eastern Orthodox Church to attend a papal enthronement since the church split from the Catholic Church nearly 1,000 years ago.

The Middle East is high on the pope’s agenda and Francis has been particularly outspoken about worsening violence in Syria and Iraq and the persecution of Christian minorities in both countries. It’s possible he will visit with Iraqi refugees on Turkey’s border.

The 77-year-old pope’s predecessor at the Holy See — Benedict XVI — visited Turkey in 2006 and made what was only the second papal visit in history to a Muslim place of worship. 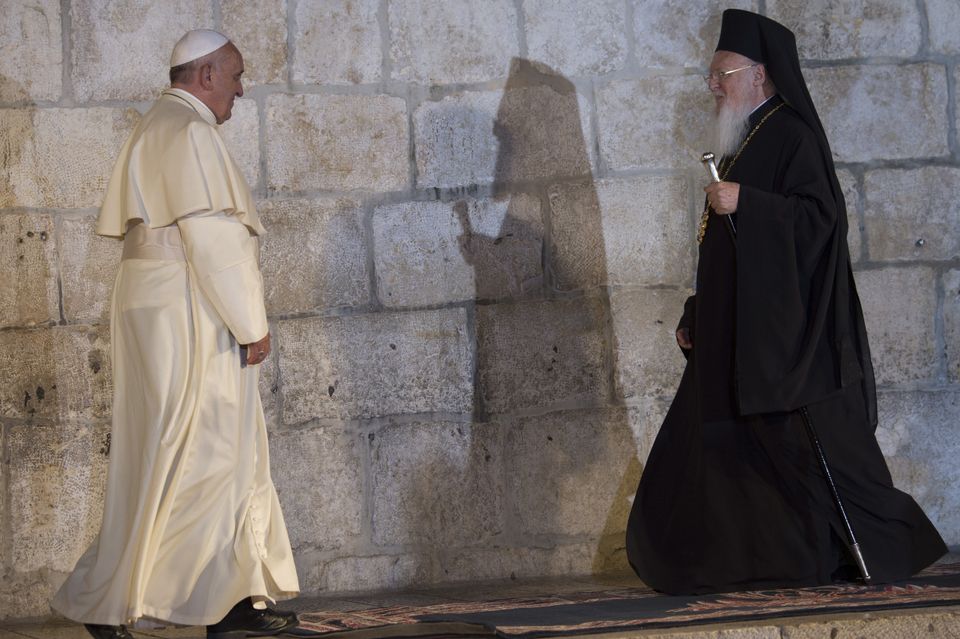 1 / 18
ISRAEL-PALESTINIAN-VATICAN-RELIGION-POPE
Pope Francis (L) walks towards Ecumenical Patriarch of Constantinople Bartholomew I outside the Church of the Holy Sepulchre in Jerusalem's Old City on May 25, 2014 during a meeting on the occasion of the historic rapprochement between both branches of the Christian church 50 years ago. They met at the Church of the Holy Sepulchre after signing a landmark pledge to work together to further unity between the eastern and western branches of Christianity, estranged for a millennium. AFP PHOTO / VINCENZO PINTO (Photo credit should read VINCENZO PINTO/AFP/Getty Images)
Getty Images