ROME -- "When in Rome, do as the Romans do." To make his visit to the U.S. a success, Jorge Bergoglio did as recommended by the old adage. As a Jesuit, he's trained in the liturgical practice of "enculturation" -- learning to adapt your language, customs and habits to the local culture you are visiting and to whom you are preaching. So, when he addressed Congress, he did not speak as he did in Cuba just before he came to the States.

In Santiago, the city where Fidel Castro celebrated the victory of his revolution in 1959, he called for a "revolution of tenderness." He referred to his encyclical, "Laudato Si'," as he did in his speech in Bolivia last summer, but without stating the same quotes. To the U.S. Congress, he shifted his focus to how "business is a noble vocation" and "can be a fruitful source of prosperity." To fight environmental deterioration, he said he trusted "America's outstanding academic and research institutions." He never opposed himself directly to Congress but instead wisely said "we, the people."

'Perspective Of Dialogue' Instead Of 'Culture Wars'

Understanding the culture and history of a host country enables one to be accepted and heard there. Thus, Pope Francis could raise as gently as possible some of the most debated issues in the U.S. -- climate change, migrants and religious freedom, even calling for the "global abolition of the death penalty" -- while still ending his speech in Congress with a standing ovation. Francis did not side with the U.S. bishops on their "culture wars," nor did he behave as a Latin American leader spouting anti-imperialistic rhetoric.

The "culture of care" and "perspective of dialogue" that Bergoglio wants to expand are based on entering the other's culture while affirming one's own identity, values and beliefs in a fruitful interaction.

The 'culture of care' and 'perspective of dialogue' that Bergoglio wants to expand are based on entering the other's culture while affirming one's own identity, values and beliefs.


"You should never be ashamed of your traditions," he told the Hispanic community he met in Philadelphia. "Do not forget the lessons you learned from your elders, which are something you can bring to enrich the life of this American land. . . By contributing your gifts, you will not only find your place here, you will help to renew society from within."

In the same way, he believes migrants coming to Europe can become "new Europeans" and give fresh impetus to an aging continent.

He landed in Washington directly from Cuba, where he had spent more than three full days, including a meeting with Fidel Castro. And once off the plane, he got into a tiny Fiat, which stood out from the black SUVs escorting him. This sort of "shock-the-Yankee" attitude of an Argentine pope did not prevent him from getting cheers from the crowd and sympathetic media attention throughout his U.S. journey.

This sort of 'shock-the-Yankee' attitude did not prevent him from getting cheers and sympathetic media attention throughout his U.S. journey.


This is where the timing of his visit last week is relevant. Francis did not start his papacy by heading to the world's major power. He toured Tirana in Albania, Colombo in Sri Lanka and Asunción, the capital of Paraguay, before coming to New York, like an artist who performs in more remote theaters before hitting Broadway. He delivered a speech at the European Parliament in Strasbourg, knowing he would have a similar opportunity in Congress later. His simplicity and humor were widely known and expected before his arrival in Washington. Should he have travelled in a big fancy car when in the U.S., he would have gone against his own principles. On the contrary, in a communication society, his Fiat immediately sent out a powerful evangelical message of humility to all those who would not read or hear his speeches. The same humility was expressed when he went straight from Congress to an encounter with some homeless people in D.C.. For this pastor, gestures and actions speak louder than words. 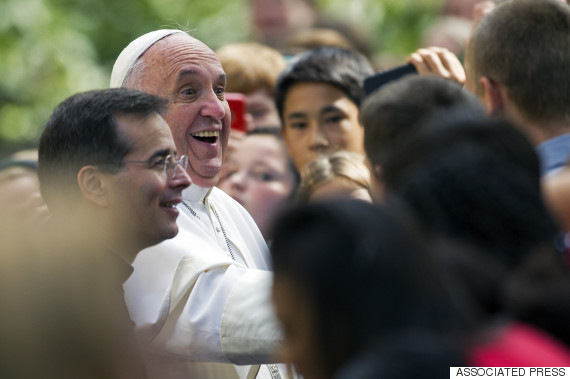 Pope Francis laughs while greeting schoolchildren after he arrived at the Vatican's diplomatic mission in Washington. AP Photo/Cliff Owen.

Francis also communicates in more subtle, if not secret ways. While in Washington, he had two private visits that were leaked later on: one to a religious community congregation involved in a lawsuit with the Obama administration over the new health care law, and another with a Kentucky county clerk who had been jailed for refusing to issue marriage licenses to same-sex couples. Of course, the pope knows these are hot-button issues in the country he's visiting. He intends to both quietly stand for what the Catholic Church holds to be true and to respect those who disagree.

'Harsh Language Does Not Befit The Tongue Of A Pastor'

"I ask you to pray for me and, if there are some among you who do not believe or cannot pray, I ask you please to wish me well," he said from the porch of the U.S. Capitol. It is an attitude he also recommended to U.S. bishops, reminding them that "harsh and divisive language does not befit the tongue of a pastor."

It is too soon to tell what the ultimate outcome of this papal visit will be for American Catholics. But for Pope Francis, who also delivered a speech to the U.N., it undoubtedly strengthened his world spiritual leadership. The visit accorded him more respect within his own church just before another world meeting of bishops at the Vatican this month on controversial, family-related issues which, just like a year ago, could challenge his authority.

Yet this pope trusts long processes. He remembers that other saying -- "Rome was not built in a day."


How the World Looks Through the Pope's Glasses
No Room for Decadent 'Princes' in Francis' Vatican
A 'Homebody' Out in the World Who Has Never Been to the United States
A Day in the Life of Pope Francis, Who Lives Behind This Gas Station
Moving the Church Forward on the Modern Family, One Step at a Time
Holy Ghostwriters: Behind the Pope's Tweets and Encyclicals
Is There Life After the Pontificate for Francis?