ROME -- On Oct. 14, Pope Francis started his weekly catechesis in St. Peter's Square with an unusual declaration: "I would like, before beginning the catechesis, on behalf of the Church, to ask for your forgiveness for the scandals that have happened in recent times both in Rome and in the Vatican."

He did not specify what he was referring to. But, in fact, these past weeks have been jeopardized by scandals of all kinds, as never witnessed since the beginning of his pontificate in March 2013.

The latest and biggest scandal yet is called "Vatileaks 2." On Nov. 5, two books will be published by Italian investigative journalists: "Merchants in the Temple" and "Avarice." Both publications focus on mismanagement of and resistance to the pope's financial reforms in the Holy See. Before the books reached the bookshelves, a high-ranking monsignor and a laywoman were arrested by the Vatican on suspicion of leaking internal information, including secret recordings of meetings, to the books' authors. One of them, Gianluigi Nuzzi, led the first "Vatileaks" affair under Pope Benedict XVI in 2012.

How many real friends Francis has today inside the Vatican looks harder to count than ever.


The laywoman suspected by the Vatican to have leaked the documents, Francesca Chaouqui, denies her involvement: "I put the Pope before all else."

She and the monsignor had been appointed by Pope Francis in July 2013 on a committee set up to reform the financial structures of the Roman Curia. Throughout his book, Gianluigi Nuzzi claims to side with the pope and the lay experts who assist him in cleaning up the financial mess in the Vatican's management.

The Holy See disagrees with Nuzzi's approach, stating that, "publications of this kind do not contribute in any way to establish clarity and truth, but rather to create confusion and partial and tendentious interpretations. We must certainly avoid the mistake of thinking that this is a way to help the mission of the Pope."

A totally different scandal made news a month earlier. A priest working in the Curia, Monsignor Krzysztof Charamsa, meant to help the Catholic Church open its eyes to the reality of homosexuality by publicly declaring himself gay and saying he has a partner. The media event in which he made this declaration took place on the eve of the opening of a world assembly of bishops at the Vatican -- a Synod -- on the issue of family in the contemporary world. The Polish theologian and official of the Congregation for the Doctrine of the Faith was immediately dismissed by the Holy See because he broke the vow of celibacy tied to priesthood. In his resignation letter, he thanked Pope Francis for some of his words and gestures towards gay people but challenged him to take more concrete action on LGBT rights in a Church Charamsa considers "homophobic."

Whether his coming out will serve its goal remains to be seen. In response to Charamsa's action, the Holy See pointed out again that "notwithstanding the respect due to the events and personal situations, and reflections on the issue, the decision to make such a pointed statement on the eve of the opening of the Synod appears very serious and irresponsible, since it aims to subject the Synod assembly to undue media pressure." Homosexuality was barely mentioned during the Synod. 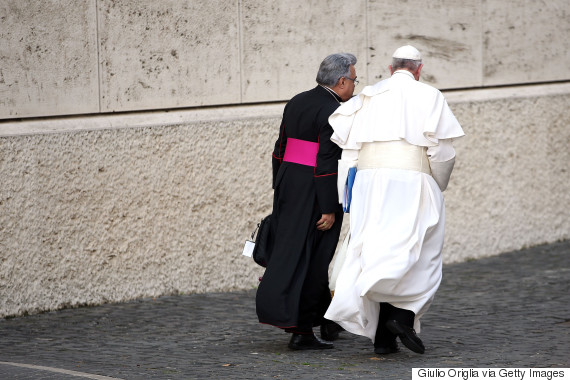 Pope Francis and a bishop leave the opening session of the Synod on the theme of family. Giulio Origlia/Getty Images.

At the start of this assembly, Pope Francis was also directly challenged by some of his closest collaborators who, among a total of 13 conservative cardinals, signed a letter handed to him criticizing his management of this gathering, with suspicion he was manipulating it. The letter was mysteriously leaked soon after to an Italian website known to be most critical of Francis. It was an embarrassment for the signatories who stressed the letter was meant to remain private, but it also weakened the pope himself by openly showing his authority had been defied.

Before this wave of various scandals surfaced in the Vatican, Pope Francis had reflected, in an interview with an Argentinian radio station aired on Sept. 13, on "utilitarian friendship": "Before considering someone your friend, let time test him, to see how he reacts in your regard ... I have felt used by some people who have presented themselves as 'friends' with whom I may not have seen more than once or twice in my lifetime, and they used this for their own gain."

How many real friends Francis has today inside the Vatican looks harder to count than ever.


How the World Looks Through the Pope's Glasses
No Room for Decadent 'Princes' in Francis' Vatican
A Day in the Life of Pope Francis, Who Lives Behind This Gas Station
Moving the Church Forward on the Modern Family, One Step at a Time
How the Pope's 'Shock-the-Yankee' Attitude Got Rave Reviews in the U.S.
Is There Life After the Pontificate for Francis?