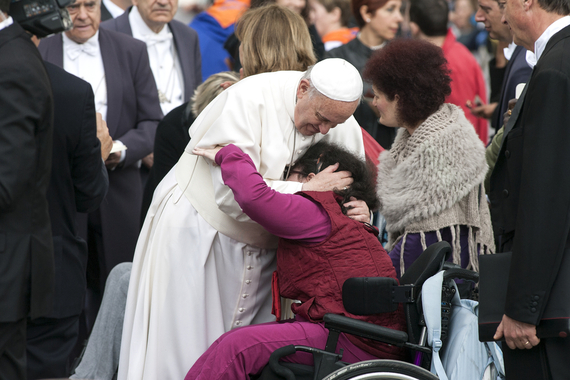 Depressed, weary, or frightened by stories of USIS and ISIS and other horrors, plus by debates over "religious extremism" and the role of Islam, we focus instead on the not-unimportant figure of Pope Francis, who makes news and inspires reflection. We recommend as a jumping-off point Eamon Duffy's review of three major books, "Who Is This Pope?" (See "Sources" below.)

For a change, we also word-searched "Protestants and Pope Francis" and were astonished to observe how numerous and how varied the answers to Duffy's question "Who Is This Pope?" were.

Note first how acceptable this pope is among what many consider "standard-brand ecumenical Protestants," who historically were on the front lines of engaging, interpreting, and--until the Second Vatican Council (1962-1965) and some aftermath operations--critiquing and opposing the Roman Catholic Church.

Their spokespersons in the aftermath had much to criticize in Pope John Paul II and Pope Benedict XVI. They cheer Pope Francis for many of his ways.

The exception comes chiefly from those who, along with many Catholic women who feel called to the ordained priesthood, hope for the ordination of women. Those who believe that the Franciscan Revolution has to be judged with respect to changed church dogma and law will be disappointed and perhaps diverted from recognizing the drastic changes being effected by this "pope of gestures and rhetoric" and what he achieves.

Beyond that front, the most noticed global Catholic story comes from the Latin American world of this pope, a world that numbers or numbered 40 percent of all Catholics. The news? Millions of Central and South American Christians have turned from Roman Catholicism to various forms of Pentecostalism, evangelicalism, and other Protestantisms.

The popularity of the pope worldwide has not stemmed the flow of the faithful to non-Catholic Christianity. For that matter, European and North American Catholics largely cheer and identify with Pope Francis but have not returned to the pews or parish rolls in numbers to compensate for continuing declines.

Surprising to many may be the spirit of concord growing between the pope and many evangelicals, though the polls show that the largest numbers of Protestant resisters remain in evangelical cohorts.

And there is one exception to the new spirit and accord: members of "Left Behind" movements, the announcers of Apocalypse and the Rapture. There is a real frenzy in their camps, as many of them choose to see this pope, even more than his predecessors, as "the False Prophet" or "the Beast" or "the Anti-Christ." Given their numbers and enterprises, they cannot be overlooked, but most other Christians have other titles and topics in mind when they look at the papacy these days.

So attractive are the changes in relations between this reforming pope and Protestants that we've almost forgotten to notice anti-Francis moves among conservative Catholics who are angry or at least upset and befuddled about how to react to the changes signaled and effected by this pope.

They get sighted now and then, but for now they have to yield the stage to those whose answers to "Who Is This Pope?' are positive.

Duffy, Eamon. "Who Is the Pope?" Review of The Great Reformer: Francis and the Making of a Radical Pope, by Austen Ivereigh; A Big Heart Open to God: A Conversation with Pope Francis, by Antonio Spadaro; Pope Francis: Untying the Knots, by Paul Vellely. New York Review of Books, February 19, 2015.

Rapture Ready. "Is Pope Francis a candidate for the False Prophet?" Accessed February 21, 2015.

This post originally appeared in Sightings, an online publication of the Martin Marty Center for the Advanced Study of Religion at the University of Chicago Divinity School. This post is not available for republication without the consent of Sightings. Please contact Managing Editor Myriam Renaud at DivSightings@gmail.com.