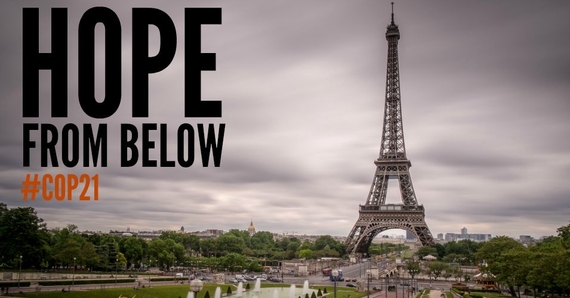 The Paris climate talks were christened last weekend by the grandest coordinated climate change demonstration in history. Parisians, for their part, lined up rows and rows of shoes, taking a virtual stand against short sighted solutions and glib political stonewalling. Pope Francis quietly sent along shoes of his own to Paris, proceeding to not-so-quietly warn world leaders against another tepid take to global warming. "We are at the limits of suicide" he affirms firmly; "It's now or never".

Previous climate agreements have recycled the same tensions: developing countries argue that wealthier nations ought to curb their emissions first. Wealthier nations, meanwhile, bridle at restrictions they consider exorbitant and unfair. The goal in Paris, this week, is to coordinate a plan which will limit warming to only 2 degrees celsius over the coming decades. If this isn't met, the likelihood of maintaining natural stability in the coming years is horrifically slim. Warming has already brought on drought, famine, and migratory patterns which contribute in significant ways to violence and civil unrest.

All of this is academic, however, and almost peripheral to the demands of Catholics in the public sphere. Pope Francis represents an unavoidable upswell of public concern, but the care for our common home is intrinsic to Catholic theology. Comprehensive ecological stewardship is emphatically exulted -- not just by Francis -- but by Pope Benedict XVI, Pope John Paul II, a chorus of Catholic saints, and the faith's most famous community organizer: a 33 year old from Nazareth. The consequences of global warming are terrifying, and growing ever more so. The impetus to stand against exploitation, however, must spring from a well deeper than the throes of self-preservation if it's too keep us well preserved.

In Laudato Si, Pope Francis speaks about the threat of global warming in terms of our weakened communities. "We have created," he admonishes, "a throwaway culture which excludes". The pollution of the planet, he claims, is just a byproduct of the increasingly insular ways we conduct ourselves: separate from natural systems, separate from one another, seperate from our spiritual core. Climate change solutions cannot stop with crafting corporate and political behavioral alteration, though they must absolutely begin there. We must have, he says, a "revolution that comes about through tenderness, through the joy which always becomes closeness and compassion."

Francis warns us against abstractly approaching climate change as purely a matter of science and economy; inspiring us to remain grounded in human dignity. In the faith community, regardless of outcome, it is our responsibility to stand against natural exploitation on matter of principle and family values. The realities of irreparable climate change will have harrowing effects for families and communities -- especially amongst the world's poor. This process has already begun to a monumental degree. Troubling times, however, are not justification for becoming morally unmoored. Deeper than a sterile focus on finance must be a spiritual commitment to fellowship: a fellowship which precludes policies which that exclude us from one another.