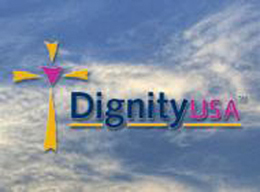 Recently Pope Benedict delivered a homophobic and hateful new year's speech to diplomats from approximately 180 countries, declaring that gay marriage "threatens human dignity and the future of humanity itself." I found this so appalling that I immediately contacted Marianne Duddy-Burke, Executive Director of DignityUSA, the nation's leading LGBT Catholic organization, to get her spin on this attack against our families. I talked to Marianne about this and more issues facing our LGBT community.

When asked her reaction to Pope Benedict's hurtful and homophobic attack on our LGBT community, Duddy-Burke stated:

Unfortunately it's become almost a new year's ritual for the pope to attack same-gender marriage and marriage equality. We've seen it year after year in his speeches when he's looking at the state of the world. It's tragic, it's sad, and it's very misinformed. Once again it just shows the deep divide that exists between the leaders of the Catholic Church and regular Catholics who are out there in their lives and their jobs and their neighbors and their families, who know and love gay and lesbian people and bisexual and transgender people, and who, more and more, support our rights to have loving, committed relationships legally affirmed.

Marrianne has also served as DignityUSA President, Vice-President, New England Regional Director, and President of the Boston Chapter. Marianne received a Masters in Theology from Weston Jesuit School of Theology in Cambridge, Mass. and was an Honors graduate of Wellesley College. Marianne speaks regularly at conferences around the country on issues of importance to LGBT Catholics and their families. Marianne lives in Boston, Mass. with her spouse Becky Duddy-Burke and their two adopted daughters, Emily and Infinity.