A draft of Pope Francis' encyclical on the environment, leaked earlier this week, shows that he attributes climate change to human activity.

The pope's views aren't unexpected. He has previously said that he believes people are mostly responsible for climate change. The Vatican and the United Nations also teamed up in April to warn the world of the effects of global warming.

But that stance puts many U.S. Republican lawmakers further to the right than the pope -- whom some regard as "too liberal" -- on an issue that is regularly debated in Congress and that President Barack Obama has called a threat to national security.

Presidential hopeful and former Florida Gov. Jeb Bush (R), who is Catholic, expressed doubt about the pope's encyclical on Wednesday, saying the religious leader should keep out of political matters.

“I hope I’m not going to get castigated for saying this by my priest back home, but I don’t get economic policy from my bishops or my cardinals or my pope,” Bush said, according to The New York Times.

Former Sen. Rick Santorum (R-Pa.), who is also Catholic, has questioned whether the church should be taking a stand on issues rooted in science.

“The church has gotten it wrong a few times on science, and I think we probably are better off leaving science to the scientists and focusing on what we’re good at, which is theology and morality," Santorum said earlier this month.

Sen. Ted Cruz (R-Texas) has claimed that science and data don't back up the arguments made by climate change activists and the vast majority of climate scientists.

"Satellite data demonstrate for the last 17 years there’s been zero warming -- none whatsoever," Cruz told NBC's Seth Meyers in March. "It's why -- remember how it used to be called global warming? And then magically the theory changed to climate change? The reason is, it wasn't warming, but the computer models still say it is, except the satellites show it's not."

Some Republicans won't even consider the science behind climate change. Sen. James Inhofe (R-Okla.), chairman of the Senate Environment and Public Works Committee, made headlines in February when he brought a snowball to the Senate floor to decry "the hysteria of global warming." Business mogul Donald Trump, who entered the 2016 presidential race on Tuesday, has called climate change a "hoax." Former Alaska Gov. Sarah Palin has brushed off global warming as "junk science."

But there are a few Republicans who argue humans do need to take action to protect the earth. Sen. Lindsey Graham (R-S.C.), who entered the presidential race on June 1, said earlier this month that he'd address climate change if he were elected to the nation's highest office. Former GOP presidential nominee Mitt Romney has said he believes "we contribute" to climate change.

A year ago, several former Republican chiefs of the Environmental Protection Agency attempted to convince GOP senators that climate change is real.

"We believe there is legitimate scientific debate over the pace and effects of climate change, but no legitimate debate over the facts of the earth's warming or over man's contribution," said William Ruckelshaus, who served as the EPA administrator under both Richard Nixon and Ronald Reagan.

According to a May HuffPost/YouGov poll, only 25 percent of Republicans think climate change is a result of human activity. A Gallup poll released in April showed how Americans' views on climate change are linked with political affiliation: 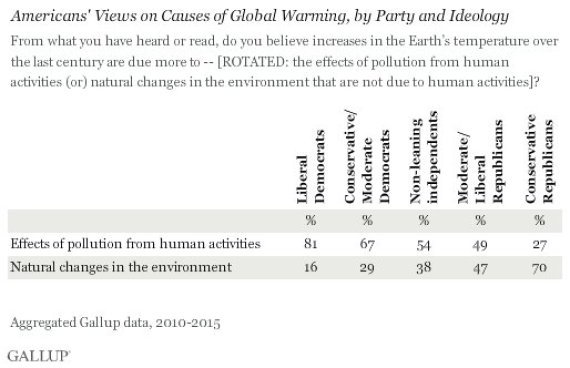 Pope Francis will address Congress in September and is expected to speak on climate change, among other issues.

1 / 8
Pope Francis Quotes On The Environment
From a draft of "Laudato Sii," translated by The Huffington Post.