ROME -- Pope Francis is about to set a new record, a diplomatic triple backflip that will be hard to top: three completely different summits in three days.

After today's White House meeting with America's most liberal president, he'll head to a rendezvous with any extremely conservative Congress. He'll wrap up with a tour of the U.N. on Friday, addressing an audience that is devoid of political orientation, and unprecedentedly divided over the mad puzzle of the "piecemeal Third World War."

After two years of long-distance messages, along with Obama's quick visit to the Papal Palace on March 27, 2014, the Pope and the U.S. are finally meeting, properly, for the first time. This test, which the whole world will watch and evaluate, kicks off the U.S. presidential primaries; a season in advance of the Iowa caucuses.

It was U.S. cardinals who famously formed the backbone of the coalition that "won" the Papal conclave of 2013. The declining superpower, through a paradox of history, managed to "conquer" the Vatican at the very moment that it was losing ground in the world, helping to bring the papacy and its universal leadership into new territory. But by virtue of this unexpected outcome, the U.S. today finds a truly fearsome adversary in its living room: one which lays out alternatives to the American Dream through soft power and a strategic plan.

No pope has ever seemed so close and yet so far away. Francis, in fact, hails both from the same hemisphere and from the opposite one: he is of the Global South even more so than he is of the West. His guiding star is not "formal democracy," to which he will nonetheless pay a solemn homage, but rather a "substantive citizenship" that can respond to the needs of all people, leaving no one stranded at society's margins.

His itinerary carefully devotes the same amount of time to the rich as it does on the poor. Compared to past papal visits, both the set and the script are changing, as they alternate between the splendor of the powerful, and the pain of the indigent. 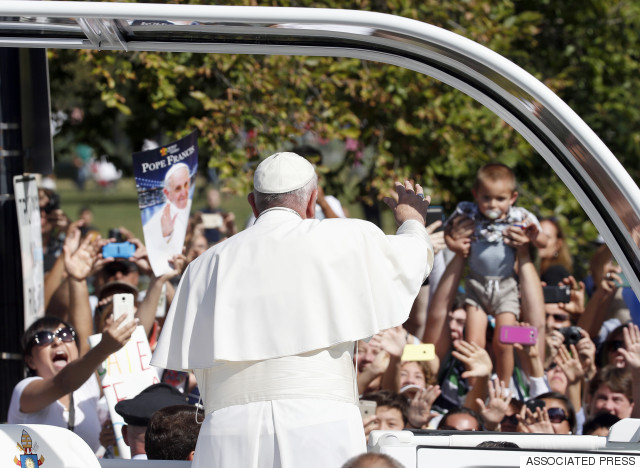 Pope Francis waves to the crowd from the popemobile during a parade in Washington, D.C., Wednesday, Sept. 23, 2015

"I am coming to be close to the people," Pope Francis announced on August 31, via video, to underprivileged communities in Chicago and Los Angeles, and communities on the Texas-Mexico border. It was a project that will continue Thursday morning among the homeless of Washington, D.C., as he descends on Capitol Hill, and later the next day in a Harlem school among the children of "dreamers," the refugees and immigrants who came in search of a dream, often fleeing a nightmare.

In an America that proudly vaunts its economic recovery while gaining an upper hand on China amid the financial arm-twisting of two giants, Bergoglio reveals the "dark side" of a winning system whose "throwaway culture" sweeps its losers under the carpet.

This whirlwind of a pope is assailing the imagination not only of the Catholic base, but also of the upper echelons of the church hierarchy, through drastic power redistribution.

Having benefitted from the large U.S. votes in the conclave, Pope Francis has not returned the favor, but is instead penalizing the U.S. Church in his choice of new cardinals, leaving them without new appointments for two consecutive cycles. To his eyes it must seem inconceivable that the U.S., which has a third as many baptized Catholics as Brazil, has three times the number of birettas: a gap that, in the end, boils down to wealth-based aristocracy as a criterion of power. For him, this is unacceptable.

So, even though the Archbishop of Philadelphia Charles Chaput, who is at the forefront of Pope Ratzinger's "creative conservatives," is getting ready to host the Worldwide Meeting of Families (the Church's equivalent of the Olympics), he has not yet been made a cardinal. The U.S., which has been proclaiming its trust in God for the past two and a half centuries, must now decide whether or not to trust the new Vicar of Christ after barely two and a half years.

An unpredictable combination of media and spiritual factors will determine the psychological impact and political trajectory of the visit. And in the meantime, as the Pope's plane waits beside Air Force One at Andrews Air Force Base, images will reverberate throughout the world of the meeting between the man who holds the key to the heavenly kingdom, and the man who holds the passcode to nuclear warfare.