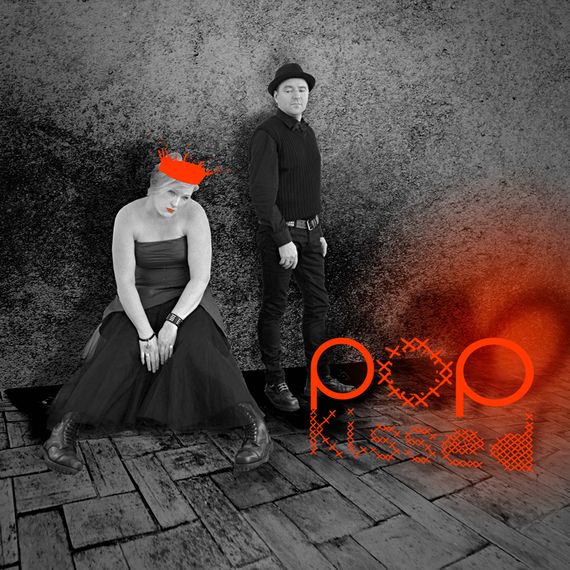 Within their new musical effort, It's A Fine Day, Popkissed, a duo based in Oslo, encompasses a litany of emotions such as anxiety, despair, love, melancholy, sexual passion, jealousy, and death. Brooding vocalist, Lill-Ann Blauenfeldt, moves from her external landscape to her internal silence. Robert Solheim adds the ambient atmospheric textures with his emotive electronics. One could imagine listening to them with little white candles burning on tabletops in a downtown Oslo bar. Outside the Oslo bar, the ambience continuing with narrow streets, small squares, low-rise buildings, and mild traffic. The candlelit atmosphere holding on to the light until the dark, long winter begins.

Like a Munch painting, the images that Lill-Ann lyrically conjures up are symbolic abstractions of people in distress. And similar to Munch, classically trained Lill-Ann repeats her images over and over, sometimes seeming unsure of herself. "Cold Wars" has her singing about nations needing to seize the madness because something is going very wrong while "Planet" pictorializes a utopia where love is the answer to the ills of a broken nation. The songs have an urgency -- a foreboding. Although, the anxiety she exhibits may be unwarranted.

In the 1960s, oil deposits in the North Sea brought unimagined riches to Norway, which helped support a socialist paradise. Once one of the poorest nations in Europe, Oslo is now amongst the most flourishing cities in the world. The nation's extensive social welfare system, supported by a third of the petroleum industry, provides free medical care and higher education, as well as generous pension and unemployment benefits. But the fear that the oil money will not last forever provokes Norwegians to look after what they have with great care. They do not want to fall into the same financial abyss of their neighboring European countries. So bothered by the issue, despite their long history of being a welfare state with costly entitlement programs, they recently elected a conservative coalition for the first time in ages.

This new political direction may be putting some citizens in a precarious mental state. And the title of Popkissed's song "Celebration" delineates not a celebration of life, but a celebration of death as the consequence of losing faith in each other. In general, Popkissed's songs are riddled with illusions and dream-like impressions, uncertainty not just residing in the public, but also the private. Lill-Ann's love songs are filled with improbability and nightmares rendering her to search in the silence of the night. Solheim's electronic sounds in the background create an aloofness that feeds into the insecurities of the forty-seven minute effort. The album in general is redundant, but so is life.

You can listen to Popkissed's album It's A Fine Day on BandCamp.