This isn't what people usually mean when they say they've got a chicken heating up in the kitchen.

Harrison the chicken sits on a padded cushion on top of a heater, by the kitchen window, so that he can keep an eye on his companion, Clarice, and his enemy, a rooster named Alvin. Though he has long white feathers, Harrison is 6 years old and "he gets cold," his owner, Terry Cummings, explained. 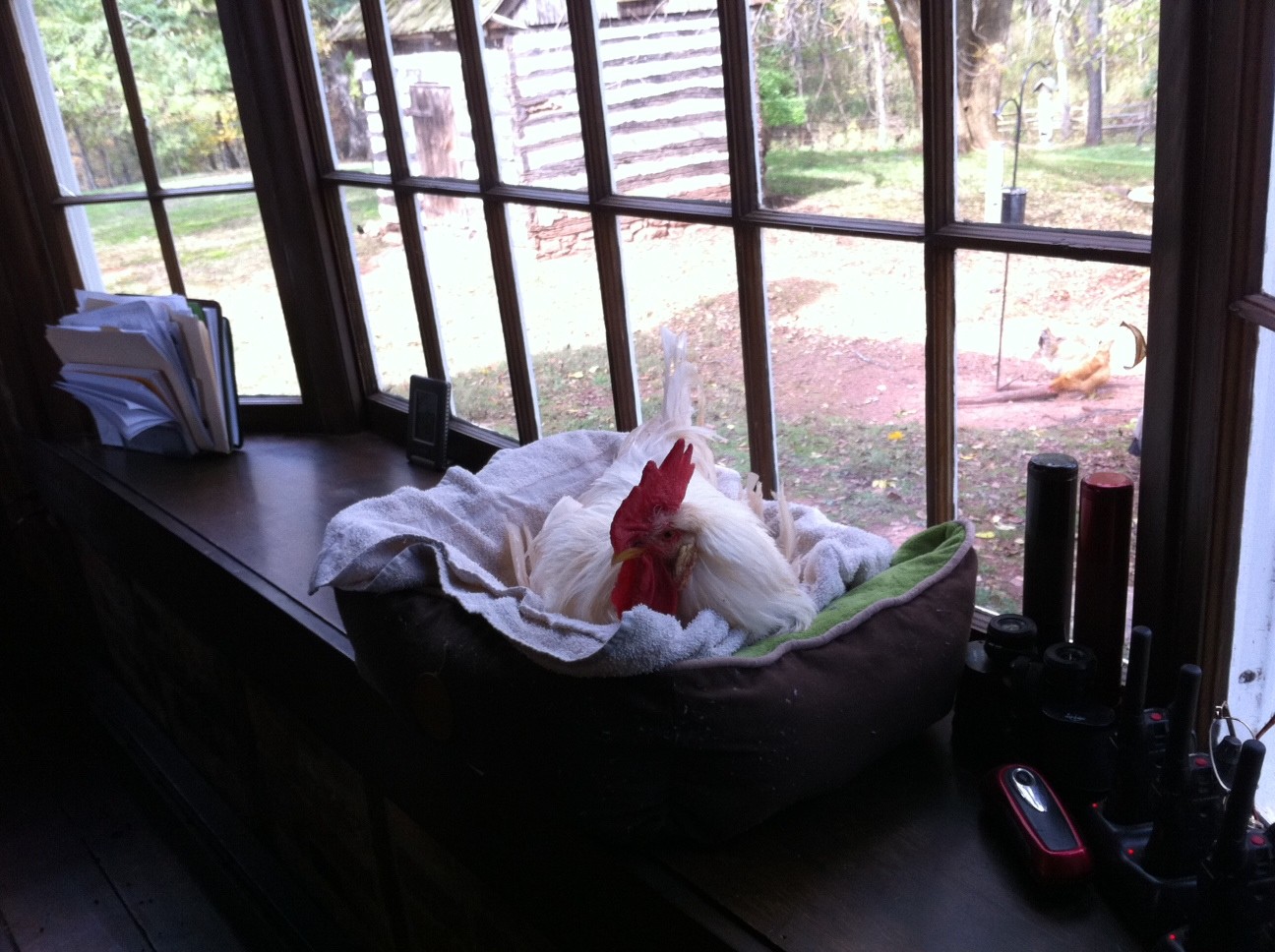 Cummings and her husband, Dave Hoerauf, run one of the country's only farm-animal rescues, Poplar Spring Animal Sanctuary, on 400 acres in Western Maryland. The farm is only about an hour from the nation's capital, but with the trees and hills and chickens -- not to mention the lack of folks in khakis talking about the debt ceiling -- it seems much farther.

And speaking of chickens: In addition to Harrison and Clarice, plus Harrison's clucking nemesis, Alvin, Cummings and Hoerauf have some 60 other chickens of a variety of provenances. They fell off trucks, or came from animal shelters after backyard hen-keeping didn't work out for suburbanites. Some recent acquisitions had been mailed in a box to a man who decided he didn't want the chicks and just threw the box away. Then add in about a half-dozen turkeys, 40 pigs, 3 horses, several donkeys, 22 goats, 19 sheep and 11 cows, all of whom have names and many of whom also bear stories of abuse, neglect or lucky escapes from slaughter.

They've got it better these days. During a recent visit, a 1,000-pound pig named Patsy, who was removed from her home in North Carolina where she was being starved, was treated to a belly rub. And Sophie -- a newly arrived pig, still small -- snuggled with a teddy bear under a heat lamp before getting up for some treats. She'd been sold as a pot-belly to a family by a farmer at the side of the road; they quickly discovered that she wasn't as advertised and dispatched her elsewhere before she landed at Poplar Spring Animal Sanctuary.

"I taught her to sit!" Cummings said, holding out a banana to Sophie. 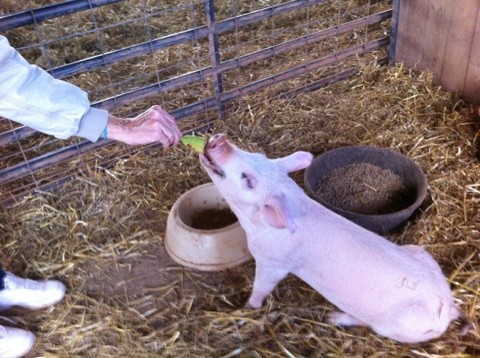 Cummings and Hoerauf opened the sanctuary in 1996. The pair had been renting a farmhouse dated to the 1730s on the site -- with Cummings commuting to D.C. to work as a veterinary technician at the National Zoo, and Hoerauf working in printing -- while the surrounding property was rented out to a beef cattle farmer. The couple got to know the animals. They developed relationships. Then one day the slaughter truck arrived.

“It occurred to me that my next hamburger could be one of my friends,” is how Cummings described this development to The Washington Post.

Meat exited the diet, and, after a long talk with the property's owner, rescued farm animals replaced the beef cattle. Over time, the land was donated by the couple's landlord -- the one who'd once rented property to the farmer whose animals were destined to be meat, and whose original lease, somewhat ironically, prohibited cats and dogs in the house.

"We didn't have any cats and dogs," Cummings said. "We had ducks and chickens."

There still aren't any traditional pets running around. (And, being vegan, the birds' eggs aren't eaten by humans; every day, they're collected and left in the woods for skunks and foxes.)

Poplar Spring specializes in animals that Cummings and Hoerauf say are often overlooked -- kids aren't generally taught to love cows and chickens, and even animal abuse laws generally exempt farm animals. So on top of caring for the 200-odd rescues who will live out their natural lives at Poplar Spring, the sanctuary is open to visitors such as school groups, as a way to promote the message that all animals, including farm animals, deserve humane treatment.

"Here they're treated with love and tenderness," Cummings said. "Of all the animals that need help, it seems like farm animals need it the most." 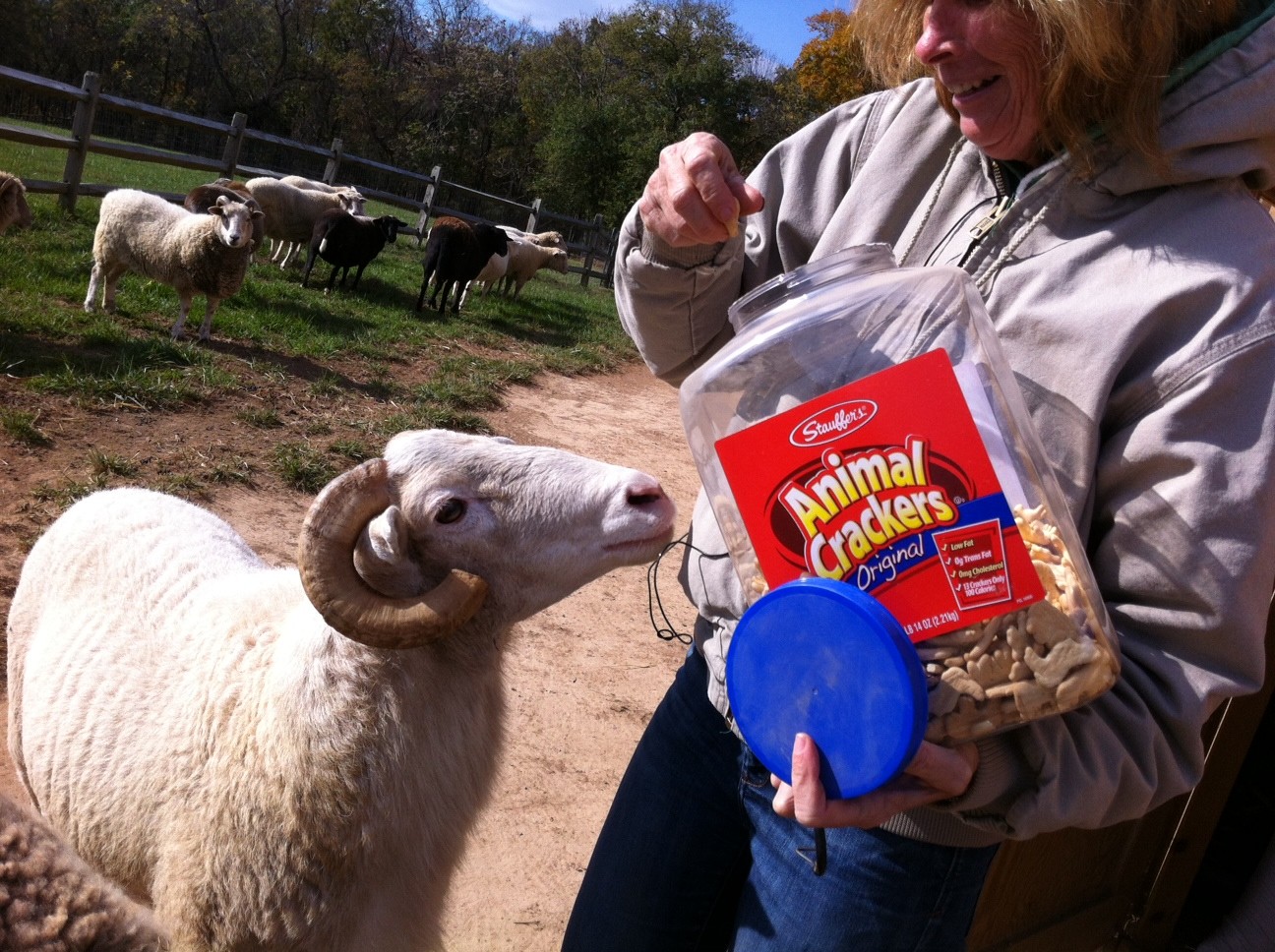 In a couple of weeks, on Nov. 23, the sanctuary will hold one of its annual events. It's a vegan potluck, where Poplar Spring's six turkeys get their own table -- in a twist on the usual Thanksgiving meal, visitors feed them.

One of the guests of honor this year will be a turkey named Perry, who arrived at Poplar Spring in 2012, on the night before Thanksgiving.

We received quite a Thanksgiving Day surprise when we discovered this beautiful boy turkey in a crate in the middle of our driveway late last night!! No note or phone call or any clue as to who brought him or where he came from. It is a mystery, but we will welcome him in to live happily here with our other rescued turkeys, who he will hopefully be friends with. Unlike the millions of other turkeys on this day, he is a very lucky guy.

You could think of this bird as a living, breathing, lucky feathered Thanksgiving parable. Or maybe he's a sign that the farm's outreach is having some effect.

Here's a video from the 2010 Thanksgiving with the Turkeys:

This is Hoerauf with one of the Poplar Spring goats: 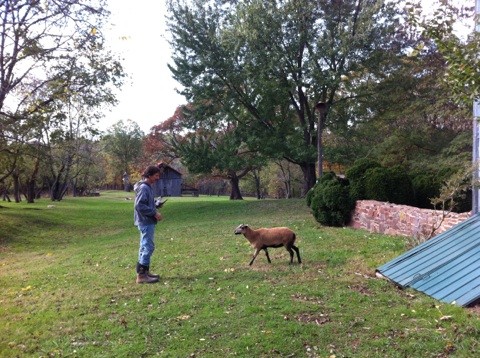 And here's Cummings with a rescued pigeon on her head: 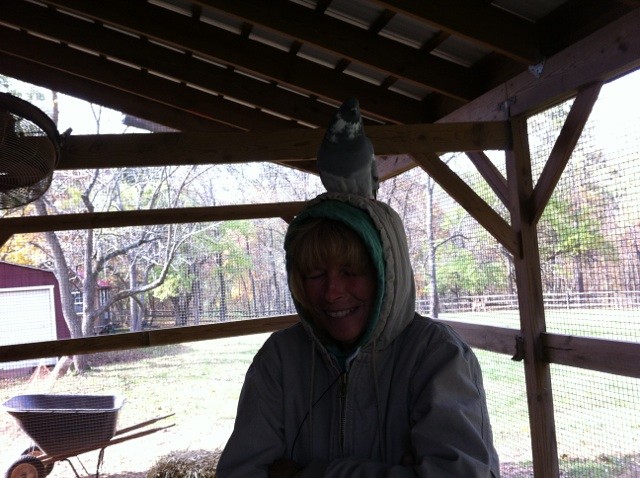