Parents often struggle with selecting baby names. Should they name the baby after a loved relative or friend? What about naming him or her after one of the parents or combining the parents' names? Should the name mean something in English or some foreign language? Or, maybe baby should be named after someone famous who the parents admire like a movie star, famous actor, sports hero, a TV character or even a politician?

There was a time when parents often named baby boys after the President of the United States. As a baseball fan, I first became aware of this presidential-naming phenomenon when reading about the Hall of Fame pitcher Grover Cleveland Alexander, who was born during President Grover Cleveland's first term.

One simple way to see how baby naming and the president are related is to examine the popularity of the president's first name before he began serving versus after he began serving. For example, Franklin was only the 147th most popular name in 1931 but two years later it had jumped to being ranked 33rd as parents increasingly named their children after FDR.

Starting with Richard Nixon and ending with George Bush (43), there have been seven presidents. For each of these seven presidents, the "presidential baby name bounce" has been negative, not positive. Another way to think about this is that before Richard Nixon, parents generally were more likely to name children after the new president but starting with Nixon, the trend reversed and parents became less likely to name children after the president. For example, in 1967 Richard was the 8th most popular boy's name but had dropped to 10th by 1969. Ronald dropped from 54th most popular boy's name in 1979 to 59th in 1981.

What might drive this observation? The generally increasing diversity in baby names is not the explanation since the rankings are relative, so shifts in rankings reflect comparative popularity of names. It is tempting to suggest that this observation is due to ceiling effects -- after all, presidents with less common names have more room to increase their ranking than presidents with popular baby names like William and George. Since none of the names were ranked number 1 before the president took office, ceiling effects don't seem to be a plausible explanation for the very consistent trend starting with Richard Nixon. Rather, maybe this comes down to some simpler explanations such as the declining prestige of political leaders and increasing political partisanship. 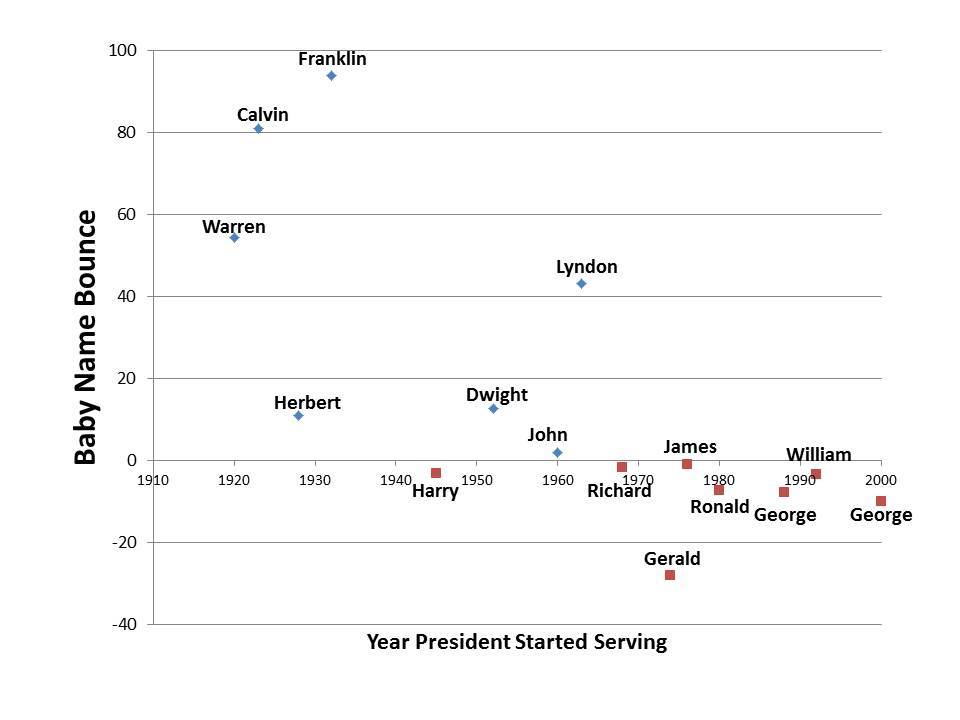 Here are few other interesting tidbits I uncovered while looking through the data:
- From Woodrow to Franklin, the increase in popularity of naming the baby after the president was largest early in the president's term and then wore off.
- Some trends preceded the presidency, such as the increasing popularity of Dwight beginning in 1943 as General Eisenhower become widely known to the American people.
- Lyndon's popularity as a first name mirrored President Johnson's popularity, jumping from 635th most popular name in 1962 to 348th in 1964 before tumbling out of the top 1000 by 1970.
- Neither Barack, Hussein nor Obama have reached the top 1,000 most popular boy names in the U.S.

Voting Made Easy
Register to vote and apply for an absentee ballot today
Register now
More:
Baby NamesBabieswoodrow wilsonDwight EisenhowerParents
Newsletter Sign Up
Raise the kind of person you'd like to know
Subscribe to our parenting newsletter.
Successfully Subscribed!
Realness delivered to your inbox