America's population is growing at its slowest rate in decades, and the sluggish economy is mostly to blame, according to one expert.

The U.S. population grew by just 0.72 percent in the year ended July 1, 2013, the Census Bureau reported Monday. That’s the slowest growth rate since 1937. Population growth has hovered at super-low levels for the past few years, according to William Frey, a senior fellow at the Brookings Institution, a nonpartisan research organization. The trend is "troubling," Frey said, and is due largely to the weak economy.

“This real sharp decline has to do with recession-related issues,” Frey said. “Fewer people come into the country because there aren’t as many jobs, and people are postponing child-bearing.” 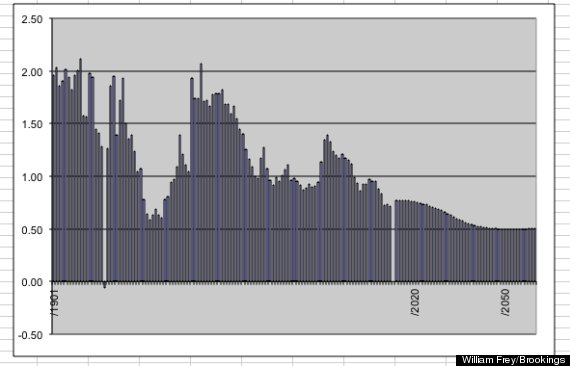 (The chart above shows the percentage growth rate of U.S. population since 1901, with projections to 2050).

Indeed, this recent period of economic malaise has been plagued by low birth rates, fewer marriages and limited mobility, especially for America’s young people. Typically in a strong economy, workers and immigrants travel to where the jobs are, but the Census data show they’re not really moving, Frey said.

And though the recession technically ended in June 2009, and economists are hoping for a stronger economy in 2014, population growth shows little sign of gaining strength. About half of the states showed somewhat slower growth rates this year than last year, Frey said. “It’s not like we’re surging back,” he said. “The free flow of the population across states -- flow that usually is related to movement to prosperous regions -- those are down, and I think that's what's troubling.”

In a sign of the lean times, the state that saw the largest growth in population percentage-wise last year was North Dakota. In that state, where a recent oil boom brought tens of thousands of jobs, employees can land a gig at McDonald’s that includes a $300 signing bonus.

“When the economy is ticking, you’ve got people moving to where the jobs are,” Frey said.

U.S. population growth is expected to slow even more in the next few decades, though that’s largely not attributable to a weak economy, Frey said. Instead, the slow growth will mostly be the result of an aging population.