In recent days, the Democratic Party establishment has stepped up efforts to freeze the momentum for Sen. Bernie Sanders, pressing Democratic Party office holders, who are also convention super delegates, to get in line and trying to create an impression that the contest is over.

These moves coincide with reports that the Democratic Party is again courting corporate influence in their conventions, including VIP access and treatment and premiere hotel rooms. The "menu of reward offerings," reported The Hill, was presented at a meeting of Party officials with lobbyists from the banking, fossil fuel, and insurance industries.

What's going on here? What the power brokers most fear is the populist, anti-corporate upsurge for Bernie Sanders and his campaign.

Sanders' far-reaching policy proposals represent a fundamental break with politics as usual, exactly why his campaign draws such broad support.

Voters, especially young people, are responding to his call for a real path to heal a nation struggling with massive inequality, a still broken health care system, a racist criminal justice system, and a corrupted and rigged economic and political system.

And they recognize the ills are directly linked to decades of a corporate stranglehold over so much of our lives. 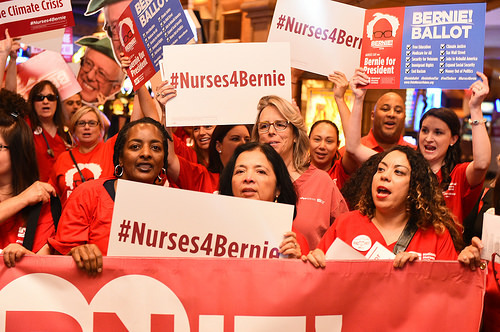 Nurses march in Las Vegas just prior to the Democratic debate

Nurses have also enthusiastically rallied for Sanders as an embodiment of the values of caring, compassion and community. They trust that when Sanders opposes
the corporate-friendly Trans-Pacific Partnership trade pact, the climate-killing Keystone pipeline, and the fraudulently named "Cadillac tax" on good health plans, he will hold to those principles on inauguration day 2017 and the days afterwards.

Sanders' platform that goes a step beyond the other candidates includes:

• Guaranteeing healthcare to all by expanding Medicare to cover everyone, thus ending the disgrace of the 33 million still uninsured as well as removing medical bills as the leading cause of personal bankruptcy.
• Expanding Social Security benefits, not merely opposing cuts.
• Raising the federal minimum wage to $15 an hour.
• Allocating $1 trillion for infrastructure repair - roads, bridges, schools, rail, water and waste disposal systems, creating millions of good paying jobs.
• Free public college tuition, the best way to end student debt.
• A Robin Hood tax on Wall Street speculation - to generate critically needed revenue for jobs, education, healthcare, and climate action.
• Legalizing marijuana, a big step away from the disastrous war on drugs.
• Banning federal funding for private prisons, to reduce a profit incentive for mass incarceration.
• Abolishing the death penalty, which like minor drug arrests and mass incarceration has a disproportionate impact on African-Americans and Latinos.
• Reinstating banking services in post offices, protecting public jobs as well as limiting the predatory practices of check cashing firms who target low income neighborhoods.
• Protecting the right of workers by cracking down on rampant employer abuses against employees who seek to form unions. 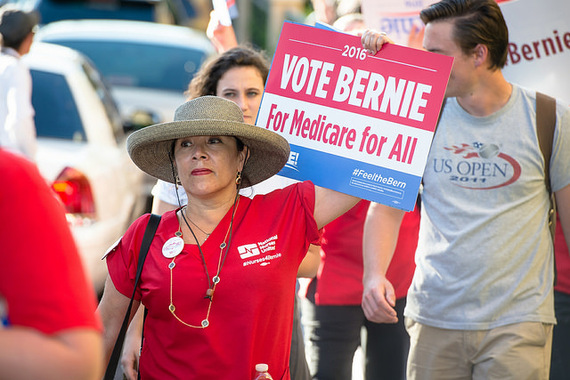 Sanders' platform directly attacks for the social and economic morass that plagues the nation, would significantly reduce racial, gender and class disparities, and encourage the social change that is at the heart the Sanders campaign.

It would also help redefine a vision of government as an champion for working people and the most disenfranchised, which is not only critical to making this a more just nation, but also the best counter to the rightwing agenda of defunding government and further enriching and empowering an already ruthless Wall Street and corporate oligarchy in the U.S.

To unpack the effects of such policies, start with income inequality.

Expanding Medicare to all, eliminating student debt, creating millions of good paying jobs through infrastructure repair, raising the minimum wage, increasing Social Security benefits and strengthening the role of unions, would all have an enormous impact on reversing income inequality and the concentration of wealth in the pockets of the top 1 percent. 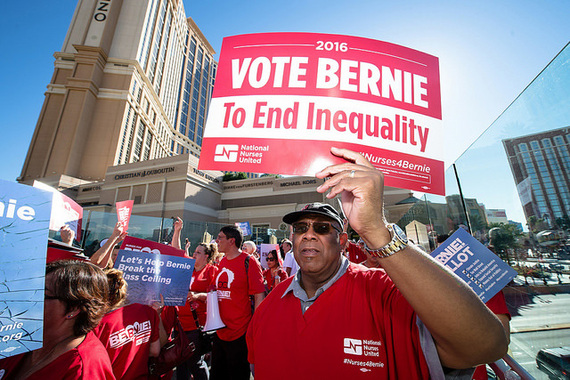 On racial justice, increasing access to healthcare and education, creating and protecting public employment (where people of color have historically faced less discrimination than in the private sector), raising wages for low paid service jobs and expanding union rights all constitute a major assault on racial disparities.

Most of these proposals tackle inequities for women as well.

Retirement security is a case in point. A new report found that women (as well as African Americans and Latinos) are far less likely to have pensions and are more dependent on Social Security - at a time when politicians from both parties are pushing for cuts in Social Security and raising the retirement age. Nearly 60 percent of women, compared to 41 percent of men, have no retirement savings, thus the significance of Sanders' Social Security proposal. Sanders plans on healthcare, education, and jobs would also erode gender disparities.

The Sanders' policy agenda, along with his pledge to break up the banks and make Wall Street and the most wealthy pay for their fair share, and his push to unite a stronger social movement and achieve a political revolution are indeed a threat to the corporate brokers who have such influence in both major parties. All the schemes of the establishment wing to circle their wagons will not stop us now.