In the new musical revue, Sondheim on Sondheim, the chorus opens the second act with a self-deprecating number about how Stephen Sondheim is a "God." Though the purpose of this second act opener is tongue-in-cheek (Sondheim himself wrote it), I'd argue that most people in the opening night audience of Porchlight Music Theatre's incandescent production certainly felt like they were worshiping one of America's most gifted artists.

As any Sond-head knows, a handful of Sondheim revues, such as Putting it Together or Marry Me a Little, already exist. However, as smartly arranged as they are, they often feel like a crisp and hollow examination of Sondheim's canon. However, Sondheim on Sondheim, which was conceived by Sondheim's long-time collaborator James Lapine and premiered on Broadway in 2010, is the first revue that actually seems to have a firm point of view and an emotional core. 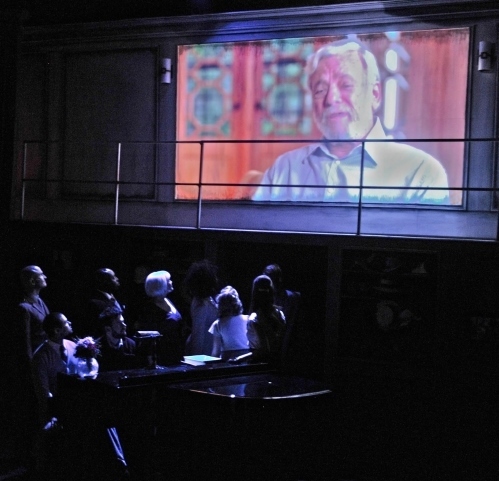 The cast of Porchlight's "Sondheim on Sondheim"

Sondheim on Sondheim's unique structure gives us the backstory behind each tune, as narrated by the master himself via video snippets of both new and archival footage (expert video design by Mike Tutaj). And, as anyone who's seen him speak in interviews, Sondheim is a relaxed and affable storyteller -- one who isn't afraid to speak pridefully of his work, but is also refreshingly frank in admitting when the work didn't hit the mark. The second act digs deeper, letting us peek into the famously reserved Sondheim's personal life, including matters of the heart and his harrowing relationship with his mother.

In short: We fall in love with Sondheim -- the man.

A risk with such a format is the actual performances can be overshadowed by the creator. Thankfully, director Nick Bowling has cast a richly talented and diverse cast of eight performers who more than match the material. Sure -- I've heard many of these songs performed more beautifully, but never with so much singularity and heart. Highlights include Porchlight stalwart Rebecca Finnegan's understated "In Buddy's Eyes," Stephen Rader's tightly wound "Franklin Shepard, Inc.," and a chilling "Something Just Broke" by the cast.

The surprising anchor of this production, however, is the mega-talented Austin Cook, who sets the music spinning through his deft accompaniment and charisma. Sporting a Sondheim-like beard, Cook represents the next generation of talent that "God" himself, I'm sure, would be proud of.

For anyone who finds fascination in the art of making art, Sondheim on Sondheim is a must-see.