Broadway is taking a stand on the Trayvon Martin case. The cast and company of The Gershwins' Porgy and Bess hooded up in honor of the teen who was shot to death by a gun-toting volunteer watchman -- who has not been arrested and is still in possession of his glock.

Moments before the curtain went up for Sunday's matinée performance of the classic American folk opera, the stars of Catfish Row including multiple Tony award-winning actress Audra McDonald -- posed for the photo.

Jeffrey Richards who is the lead producer of Porgy & Bess says "This is something they wanted to do and felt very strongly about and it will have special meaning from this cast. They want to do their part to foster awareness about a serious and tragic situation."

Producer Irene Gandy says "We are very happy and proud to be part of a company who are really caring and this was an unsolicited gesture."

Porgy & Bess opened to rave reviews in January at the Richard Rodgers Theater in Manhattan. The cast of the hit show is following in the footsteps of the Miami Heat -- who also posed wearing hoodies in honor of Trayvon Martin.

George Zimmerman, who has not been arrested for the killing of the unarmed 11th grader, is now the subject of a state and federal investigation. Parents of Trayvon Martin say they won't be satisfied until he is charged in connection with the death of their son. 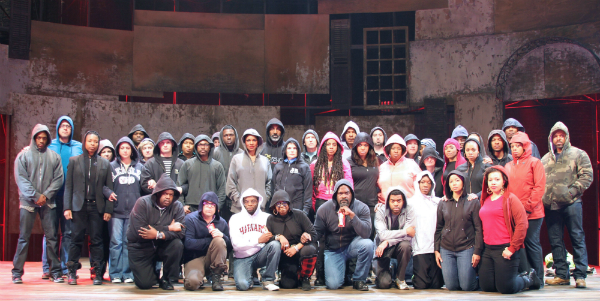