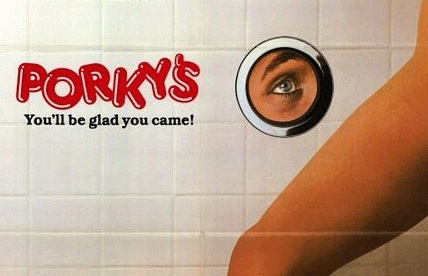 These days, you can't open a magazine without being bombarded by the fuzzy recollections of the cast and crew of important movies of our -- or more likely an aging editor's -- youth.

Yet another look back at how Caddyshack's Carl Spackler was entirely improvised? Even total consciousness on your deathbed isn't worth giving it a read.

Robert De Niro was way into Jimmy Conway on the set of Goodfellas and carried an actual $5,000 roll, throwing bills around that had to be retrieved at the end of the day? Mamma Mia! How method-y. What are you stupid, or what?

Do we really want to get up on a Saturday and go behind-the-scenes with a brain, an athlete, a basket case, a princess and a criminal? There's a reason we did, did, did...forget about the Breakfast Club. High school ended twenty years ago.

The problem with these oral histories isn't that looking back at past favorites affords an easy way to hear from those all-important celebrity voices, nor that it's a nostalgic ploy to keep Gen-X subscribers happy since the kids after that don't quite understand these "magazines" you speak of. 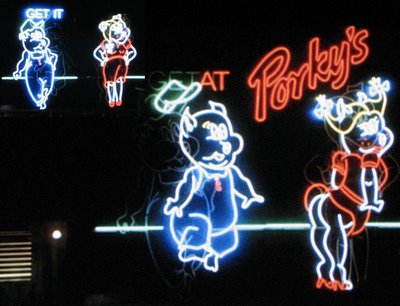 No, the problem is that they don't pick the right flicks. They need to zero in on movies that mattered, to select a singular filmic triumph that truly made a difference in a young boy's life.

Porky's is the kind of movie that stays with a pre-teen forever. One might even go so far as to call it sticky. However one describes this beloved classic, it's clear that it left a stain. To this day, there's many a night when it rattles around the brain of a lonely man in an empty apartment.

Has it been 29 years already? March 2011 will mark the furniture anniversary of one of the most seminal (ahem) motion pictures in the American canon. That's why I've gathered many of Porky's key players for an oral history of the film that gave the world the beloved character of Paulie the Penis*.

Poor little guy is just trying to have some fun.

Backstory:
Bob Clark, director: The idea of a sex farce came to me a couple of years earlier while working on Sherlock Homes and Saucy Jack. Each night, after many a pint, Christopher Plummer and James Mason would regale us with ribald tales of tag-teaming Shelly Winters and Julie Andrews. I'm sworn to secrecy, but let's just say those hills were alive with more than the sounds of music.

Don Carmody, producer: Bob and I were sick of the "Morning in America" hypocrisy, the regressive Moral Majority view of sexuality that was rampant at the time. The more we talked about it, the more we realized kids were having sex in the 1950s, no matter what Jerry Falwell wanted us to believe.

Clark: As we fleshed out a script about young men trying to get laid in the Eisenhower era, at least a dozen different people told us they too lost their virginity at a seedy swamp whorehouse owned by a the brother of an obese crooked Southern sheriff. It quickly became clear that this was a universal story we had to tell.

Filming:
Reginald Morris, cinematographer: I'd worked with Bob on Silent Night, Evil Night, which you probably know by its more family-friendly title Black Christmas, so I understood his vision. He wanted the same anarchic spirit of slaughtering sorority girls during the holiday season, but with the warmth and mystery of adolescent sexual awakening. They key to it all was where we shot the film, Miami, a steamy town practically bursting out of its bikini at the time.

Dan Monahan, "Pee Wee": There's an urban legend that the Porky's set was flooded with zaftig hookers to get the cast in the right frame of mind. We didn't need professionals. This was Miami in the 1980s, capiche? My nosebleeds from the nightly parties didn't stop until Clinton was in office.

The Shower Scene:
Mark Herrier, "Billy": I remember the three of us were having trouble with the scene because we'd never encountered a girl's shower with built-in Peeping Tom holes. It took us awhile, but we loosened up when Bob said, "It's a beaver shoot, just go for it." We improvised a bunch of different ways to shoot that scene. Wyatt painted his member orange for one take, in another all three of us penetrated the holes, and I don't know where I came up with the line about so much wool you could knit a sweater. Tommy blew us all away with his "Paulie the Penis" riff. Even Balbricker busted up a couple of times. Classic stuff.

Wyatt Knight, "Tommy": To this day, men who want me to recreate the shower scene stop me in supermarkets. It's awkward, but I'm cool with it. We all gotta' be known for something, right? 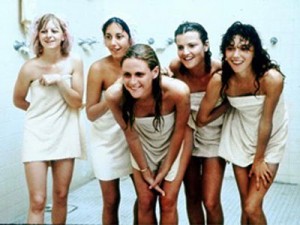 Monahan: I was the only method actor in the group, so when I told Blubber McNeil to move her lard ass, I meant it! I was no misogynist and didn't like what I'd become, so I had to leave the set to decompress for a few days. Blubber and I laugh about it now, but it took months of monastic living to get Pee Wee out of my system.

The Tallywhacker Scene:
Clark: Everyone always wants to talk the shower scene, but to me, the essence of Porky's was what followed. Our secret weapon was the wordplay. A Tallywhacker? With an incriminating mole? If that doesn't capture this country's Puritan views on sexuality in a nutshell, I don't know what does.

Nancy Parsons, "Balbricker": I was a serious thespian who had performed Shakespeare at the Pasadena Playhouse, but by the time I died in 2001, I made my peace with being best known as the grumpy no-fun anti-penis Balbricker. Spray-painting "tallywhacker" on my headstone seems excessive though. 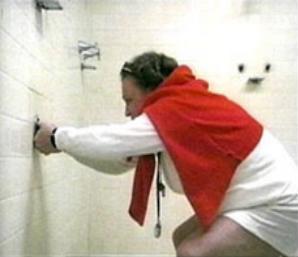 The Lassie Scene:
Clark: We all knew Porky's had one true breakout star. Nobody was surprised that Kim Cattrall's raw sexuality and immense comic talent led her to become a Sex and the City icon. If anything, we were shocked how subtlety she played Samantha Jones.

Boyd Gaines, "Coach Brackett": Bob wanted to capture the spontaneity of two high school co-workers having an impromptu shag on a pile of dirty jockstraps, so Kim and I didn't rehearse the scene beforehand. I remember the script simply said that Honeywell "makes loud Lassie noises." I wondered if she was going to bark, or go "arf, arf," or "bow-wow-wow," because that didn't seem true to me, but Bob knew what he had in Cattrall. We nailed it in one take. 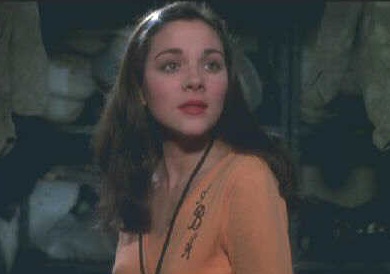 Critical Reception:
Clark: The critics killed us. Pauline Kael wrote something in The New Yorker about how Porky's takes us back to sex in the 50s...the 1850s. But I didn't make it for the Pauline Kaels of the world; I made it for her thirteen-year-old nephews. I think the $105-million take at the box office says it all.

Carmody: Was Porky's raunchy? Sure, but we live in a raunchy world. Critics totally ignored the deeper issues the picture raised. You'd be hard-pressed to find a review that mentioned our groundbreaking anti-anti-Semitism message, or our hard-hitting look at the dangers of the illegal sex trade, but they never ceased to mention "Mike Hunt." Years later, American Pie ripped us off to astounding acclaim and what did that movie teach kids? Don't deflower your dessert?

Legacy:
Tony Ganois, "Meat": Suddenly, we were rock stars. I couldn't go anywhere without some woman asking to see it in person. I literally became a piece of meat, which sent me into a dark drug-fueled depression. I could've had sex with any woman I wanted, but the fact of the matter is, I wasn't my character if you get my drift. Porky's nearly killed me, but I came out on the other side and now run SDM, a rehab clinic for men with length and girth insecurities. Take it from the Meat, size doesn't matter. 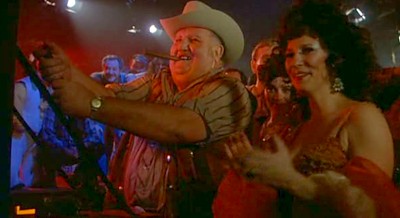 Kaki Hunter, "Wendy": We all got together when the Criterion edition was released last summer. We're all older, wiser, and fatter, with kids and grandkids of our own who love that crazy-little-tits-and-ass-movie-that-could, so it's made me see the film in a whole new light. Porky's will live on forever, you know? Quality talks, dogcrap walks. When's the last time anyone even mentioned Screwballs, Hot Dog or The Last American Virgin? One other thing. To answer the question once and for all. Pee Wee and I never did it when the camera was off.

Monahan: Did Pee Wee get laid by Wendy? To steal a line from the movie that's defined my life for 30 years, does a bear shit in the woods?

*Ed Note: If anyone actually involved with Porky's wants to share true filthy stories, email me. But they better be good.