NEW YORK--Pornography has long been an au courant subject for contemporary art -- see John Currin, Marilyn Minter, or Richard Prince -- but it's rare to find a working porn star who's making art. (Ron Jeremy's media empire isn't exactly the Warhol Factory.) Enter Sasha Grey, the 23-year old adult film actress who has, like an open-minded and highly flexible comet, streaked across the mainstream media radar over these past few years. Suddenly there Grey was, in American Apparel ads. In Steven Soderbergh movies. On "Entourage," dating Vince. And, as of today, promoting the release of her first book of art photography, "Neu Sex," published by VICE Books. 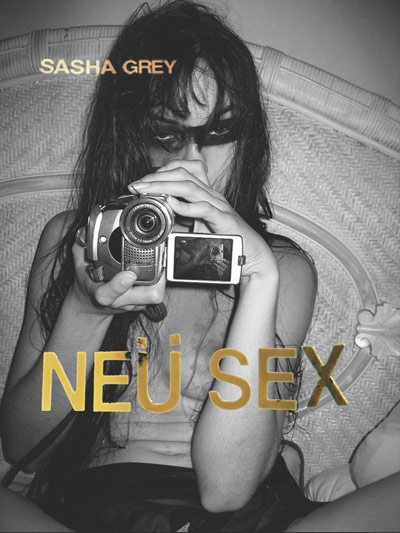 Last night Grey was joined by friend and occasional collaborator Brandon Stosuy for a standing-room only conversation at Housing Works Café. Dressed rather demurely, Grey shared her love for Cindy Sherman and Nan Goldin, and explained how she's been able to recast her career in pornographic films as performance art. It's about "using my body as a canvas, as the tool," she said. "I was able to examine myself." She also discussed the difficult positions in which modern women find themselves ("We're allowed to be sexy, but not sexual") and how she's managed to juggle adult acting with a long-term relationship ("It's all about communication").

"Neu Sex" itself is an exercise in obsessive self-portraiture, what Grey calls a conscious effort to retain editorial authority over her image. The content veers between snapshots -- Grey with Billy Corgan, Terry Richardson -- and poetic surrealism. It owes as much to the Myspace generation's fixation on profile pics as it does to Sherman or Goldin. (Grey says that 5 or 10 percent of the available photos didn't make it into the book; evidently VICE thought there were "too many men," not enough Sasha.) 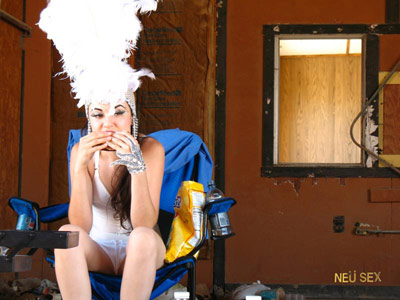 "Neu Sex" is both about glamor and its opposite -- there are plenty of images of Grey looking rough, or peeing on the street, or dripping with fake blood in the shower. Whether this is liberating or disturbing is a matter of personal taste. Either way, Grey isn't about to take a break anytime soon. She and her fiancée Ian P. Cinnamon, who shares photo credit with Grey here, are working with Stosuy on a black metal-themed film, "I Am The Destroyer"; her band, aTelecine, is due to release a new album, "The Falcon and The Pod," a "dark space odyssey," according to the band's Twitter feed. And Grey's friend ?uestlove was on hand at the event's afterparty, perhaps pointing to even more eclectic collaborations in the near future.

More of Today's News from ARTINFO:
The Guggenheim, the Founder of MTV, and a Horde of Dealers and Artists Sign on for Artspace, the Latest Online Art Commerce Experiment
Bahrain and Lebanon Withdraw From the Venice Biennale Due to Mideast Turmoil, While Egypt's Participation Is Uncertain
Why Patrick Cariou's Legal Triumph Over Richard Prince and Gagosian Is a Victory for Artists
Dissecting the UK Arts Cuts: Anish Kapoor and Four Other London Art Figures on What to Expect Now
Treasures Looted From China's Forbidden City Set Multimillion-Dollar Records in France