Note: This post may contain links to NSFW sites.

In a world where brother battles brother, and Russia and Ukraine find themselves in a virtual state of war, Only One Man could restore peace and harmony. One Man. Sandwiched between two bleached blondes. Riding an inflatable dolphin. And wearing nothing but a jockstrap.

You might be asking: how exactly does this work? And why didn't Angela Merkel think of it first? 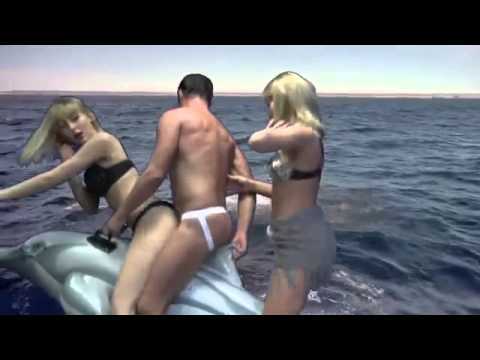 Pistotov's latest masterpiece, "From Russia to Ukraine," is musically monotonous (Pistoletov's range here consists of three notes), but visually captivating. Longtime fans will recognize that Pistoletov is exercising admirable, almost prudish restraint: one of his earlier videos ("Crimea is Ours") was censored because its climax is, well, a climax. In "I'm a New Russian Pirate," which somehow manages to look both like a SpongeBob cartoon and SpongeBob's own vicious parody of David Hasselhoff, features a naked Pistoletov swirling his penis around in full circle, first clockwise, then counter-clockwise.

In keeping with the spirit of the video, today's essay is something of a joint venture. My wife, Frances Bernstein, has contributed a number of invaluable suggestions. The terrible, sexist cliche "behind every great man is a great woman" comes to mind, except that this video makes it disturbingly literal.

I hear the dolphins singing....

The song's Russian lyrics rhyme, so my humble translation can't possible do them justice. But I'll try:

Chorus:
From Russia to Ukraine
Bouncing-bouncing on dolphins,
If you don't bounce, you're a Maskal (derogatory for "Russian.")

Let us cross the border.
Bouncing-bouncing at a gallop
On dolphins around Europe.
Crimea was yours, now it's ours,
And you'll give us Donbas, too.

Take care, Ukraine.
You won't be united from now on.
You've sunk to the bottom,
Been consumed by war.

Glorious, glorious Ukraine,
So far you're unconquered.
Ukraine, you are one,
And we need all of you now.

Poor, poor Ukraine,
Possessed by the Yankees.
Don't sell yourself to them,
But give yourself to us.

Ukraine will be with us,
Always united with Russians.
Remember, you were once
tender and sweet with us.

Ukraine and Russia
Are two countries with one messiah.
Two similar languages
For the Khokhol and the Rusak (slurs for "Ukrainian" and "Russian", respectively)

As any literary scholar will tell you, this has to be an allegory. Allow me to present a few possibilities:

1) Pistolev represents Russian-Ukrainian unity. Pulled apart from both sides, this fragile coalition tries awkwardly to remain stable atop its shaky, dolphiny base.

2) Russian-Ukrainian unity is represented not by Pistoletovs' entry body, but by his backside. The left cheek is Russia, while the right is Ukraine. HIs puzzling attempts to insert the dorsal fin (Crimea?) in between show just how difficult keeping the two together can be.

3) Pistoletov is Russia, the blonde in front of him is Ukraine, and the blonde behind him is Europe. This requires us to abandon cartographic accuracy, but bear with me. Powerful, masculine Russia is, of course, taking Ukraine from behind. Or at least pretending to. From behind, Europe can posture all it likes, but is ultimately helpless: there is simply nothing it can do.

Why is the woman behind him so awkward? If she represents Europe, she shows that, while Europe is superficially free, it is nonetheless awkward, inhibited, and unsexy. The stock footage of the man swimming first behind the dolphin, then along with it, and then ahead of it represents Russian public opinion, which has overtaken and surpassed the patriotic narrative fed to it by state television.

While this particular allegorical scenario sounds like it puts Russia in the position of unstoppable aggressor, I would like to draw your attention to one detail: Pistoletov is not entirely naked. Might I suggest that this particular dolphin dance is an allegory not just of power, but of the tension between a show of force and the need for restraint? Pitsoletov's position behind "Ukraine" suggests a classic metaphor of sexualized dominance. But Pistoletov is holding back. Perhaps the organ left unseen is not a straightforward representation of Russian might, but rather the forces of a Russia that could be unleashed if all controls were lifted? Almost unbridled nationalism is bridled only by one powerful, strategically=places jockstrap.

That jockstrap is Vladimir Vladimirovich Putin.