The woman or man on the screen would wear what you want, do what you want, and, best of all, they'd be uttering your name at that key moment of ecstasy.

OK, you can stop imagining now -- because that's exactly what Tim Stokely has done with Customs4U.com.

At the industry's largest gathering, the AVN Adult Entertainment Expo, it's not about sex anymore. It's about business. Actors pass out free swag to pump up their brand, while exhibitors vie for attention. An industry that once swelled with pride has gone flaccid and is trying to rise again. 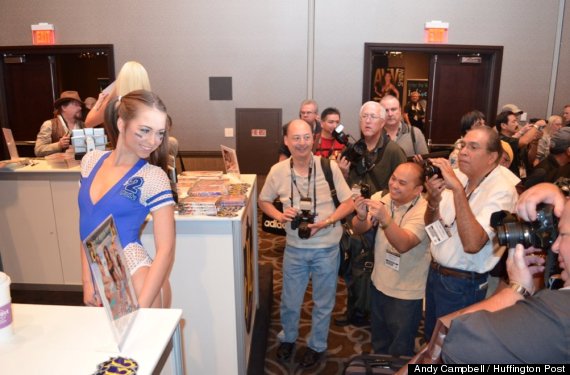 Give Them What They Really Want

"Basically, Joe Blokes would pay, say, $100 for his own personal movie, where the star is saying his name and doing what he wants," Stokely said. "The model can name her own price ... She logs in and could say, 'I want to receive $100 for a five-minute video and $200 for a 10-minute clip,' or even more if its a fetish clip."

Stokely doesn't take a cut, but he charges the customer a 35 percent markup. For example, he says, if the model wants $50, the video would cost you $67.50. It's pricey, but it's also a one-of-a-kind product.

Kirby told HuffPost Weird News that he hopes "fresh, original content" -- like the kind Netflix provides from time to time -- and the affordable daily rate will keep customers coming back. But he had to admit, he can't tell if this thing is actually going to work.

"We're the guinea pig -- we're taking the risk," Kirby said. "If we can't convince people to pay a dollar for content, then we won't be in business very long. But we're banking on the hope that we can."

Of course, with so much free product in the marketplace, that is a big "if."

This Is Why We Can't Have Nice Things