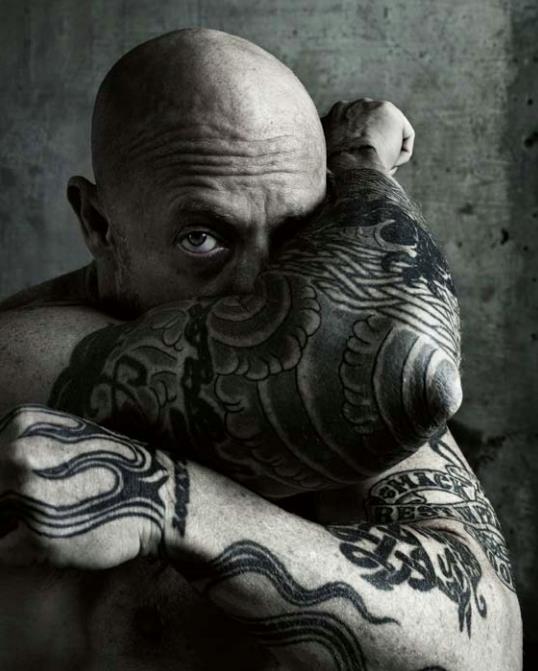 I met a fascinating man named Buck Angel recently at a screening of "Mr. Angel", a new documentary about his life, his gender transition, his successful career, and the powerful journey of love, acceptance, and forgiveness his family has been on together since he first landed on this planet.

Is your mind blown? Well, good. That's the point. Buck has been amassing a new fanbase in recent years (with his clothes on) blowing minds across the land as a motivational speaker on the subjects of sexuality and gender expression. Mr. Angel is on a grand, pornographic mission to change the way the world thinks about what it means to be a man. He is determined to challenge norms and push us all out of our comfort zone into a new world where we are not defined by our genitals.

Watch the official trailer for "Mr. Angel", then read our chat below.

Lynn: In the film you speak about growing up in a household where your family didn't say "I love you". Is that something that's important to you now as an adult

Angel: You know, I didn't know that I needed that because when you don't grow up with something you just don't know it. When my dad hit me across the head, I felt like "Wow. My dad loves me" in a way. It felt affectionate to me at the time, which is really sick. It wasn't until I got with Elayne that I started to understand the words "I love you". When you have love in your life it changes the way you live your whole life. 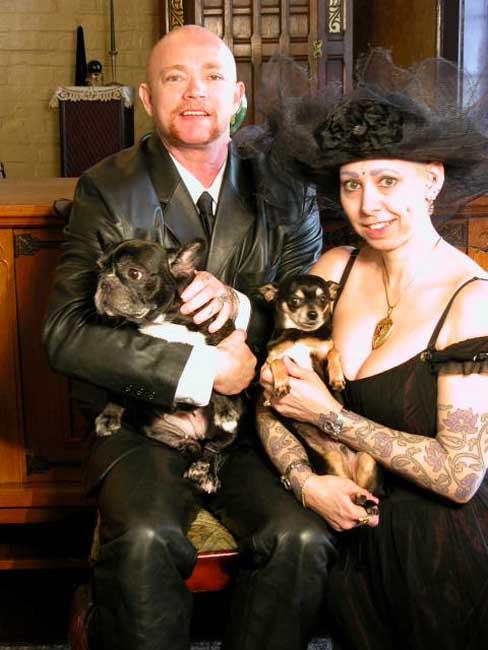 Lynn: It seems like in many ways you've been embraced by folks in other countries more than in the states. Is that fair to say?

Angel: I'll be honest, it's tough sometimes for me to deal with the trans community in the U.S. because it is so harsh. I am so out there I have to deal with the community and their animosity. That has been very difficult for me because my intention has only ever been to further empower all of us. My message is really about being loving and understanding. It's about knowing who you are. In other countries, they are just not like that to me. They have always embraced me and my work. Maybe the trans community is more positive to me in Europe because Europe is more positive to the trans community than the United States is.

Angel: Yeah, the gay community really has always embraced me. They love everything that I do. Gay guys are the ones who buy my porn. Also, the straight community and feminist women's communities, they have all embraced me. It seems to be that the trans men and trans women communities tend to be really hard on me. They also tend to be really hard on Chaz Bono and Lucas Silveira, who are also both out there in the media. I never have said that I represent anybody but myself and my own message. I am not in any way a representation of any community. I think that's what happens though when you become a voice, though. It doesn't make sense to me, because you'd think the community would want you to be more powerful.

Lynn: Well, yes. You would think so. That's not always the case.

Angel: I know you know exactly what I'm talking about, Logan, and it's sad to me, so sometimes I have to separate myself from that. I just try not to take it personally. Everybody has their own stuff going on and it projects out in a lot of different ways. It's really intense how the trans community is chewing its own feet off, eating themselves up instead of going after the people who really hate us.

Angel: It doesn't make sense, but it's part of what comes with deciding to be an activist or an advocate. It comes with the job I guess. 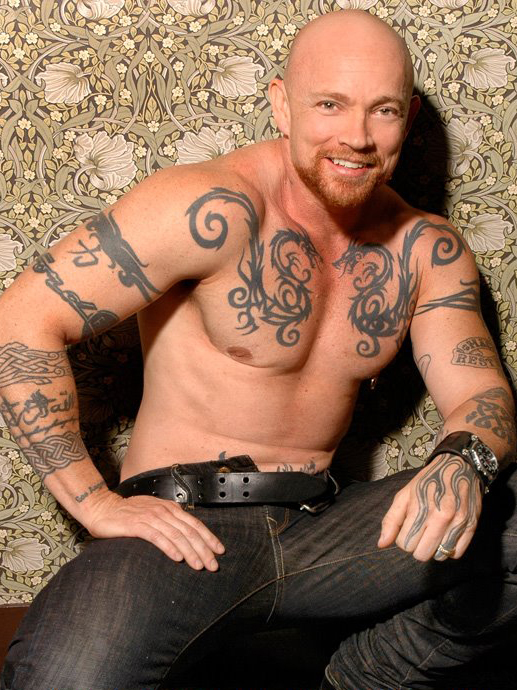 Lynn: So if I were to go to one of these events where you are speaking, what would that ride be like?

Angel: Well, I don't have a set thing that I talk about, a lot of times I just feel the crowd. I'm a storyteller. I share certain pieces of my life and how that's gotten me to where I am today. Last year I was on a television show in Ireland and I called my parents who had seen it on TV and my dad said "You know, from this little shy girl who used to hate everybody and hate the world to someone who's a public speaker around the world is just shocking." and it is shocking even for me that I can go and stand in front of a group of people and talk to them about my life.

Lynn: You mention your father, and in "Mr. Angel" there is one part where it seemed to me like he feels remorse for how he treated you while you were growing up. How are the two of you these doing these days?

Angel: That moment in the film was a breakthrough point for our relationship. When we were filming it, I was in the other room, and I heard my dad break down. After that day everything changed like magic. We bonded in some weird way. He says that I'm his son now. I don't see him having a hard time with it.

Lynn: Speaking of the world changing...

Angel: Totally. I want other parents to see "Mr. Angel". It's an important film to have in our queer film festivals, but like one person said at a Q&A, we need to get it into the straight film festivals. It has such a powerful message that has nothing to do with anything but family. 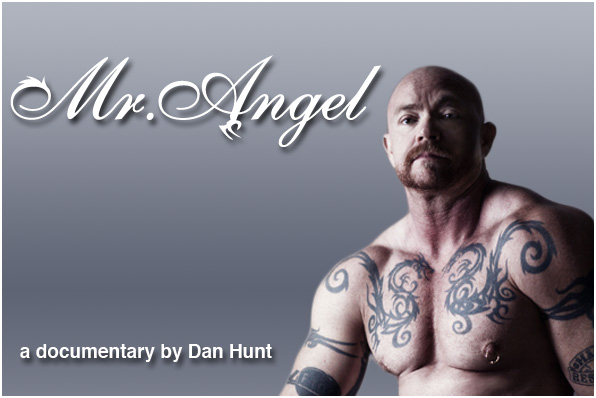 Lynn: The documentary captures a bit of a health scare you had which led to a hysterectomy as a result of long-term use of testosterone. What advice you would give to trans-identified youth who are looking to hormone therapy right now?

Angel: I want to speak more to the medical field and say we need to do more research on long-term use of testosterone to find out what the effects on reproductive systems are and all kinds of things. I'm not a doctor so I don't know everything. All I know is what happened to me after long-term use of testosterone. My doctors were telling me "Oh, don't worry about it. Nothing's going to happen." Trans youth need to talk to their doctors about it. Like, what does it actually mean when you start to take testosterone for the rest of your life?

Lynn: Do you think the reason you didn't know back then is that doctors were largely unaware of trans issues or trans people?

Angel: Oh my god, dude. I did it twenty years ago! My hormone doctor had never treated a man like me ever. He had only treated transsexual women. With my surgeon I was a guinea pig. Every single one of the people who worked on me in the medical field had never previously touched a man like me. My hormone doctor basically said that we would just have to figure it out on our own. I have always said I would still continue to take testosterone even if I were going to die. It is that important to me.

Angel: I really believe pornography is educational. It's something to do with the hatred about sex and our bodies, you know? It's this weird sort-of love/hate thing that people have, mostly in the United States, and they are just so disconnected with the positivity in sex. The bottom line is that my work has changed so many people's way of thinking about sex, about their bodies. People have learned to love themselves through my movies, to learn to celebrate their bodies. I celebrate my body sexually. So, those people who say that are just disconnected from what sex is really about. Sex is about loving yourself, really, and enjoying yourself. 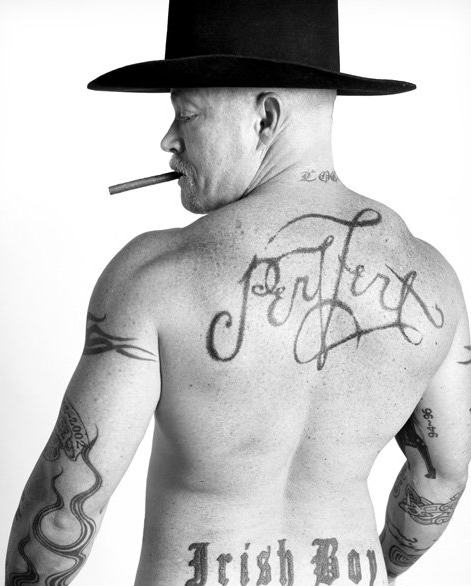 Lynn: Ok, let's end this on that note. I think you are one special person, Buck Angel, and I am so happy to know you. I hope this new chapter in your life brings you all good things!

For more on the "Mr. Angel" documentary, visit MrAngelMovie.com.