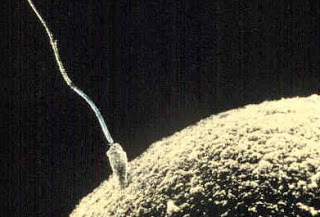 There was a time when sex was about reproduction, but them days have passed. One of the villains is probably idealization, the vehicle by which instinct negotiates the shoals of consciousness. If you believe that consciousness is what separates man from animals then it is easy to get a clear view of this dichotomy between sex as a biological process whose pheromones and hormones produce pure and simple urges as it for instance expresses itself in the estrous of female mammals. A female human may dig someone and it may occur during her procreative years, hence camouflaging the wolf in sheep's clothing, but the net is that her instincts remain at the service of her mind. Hence the simple mating season for animal becomes a whole Megillah once you in introduce thought. Sex is literally coitus interruptus where memory and anticipation, two major constituents of consciousness, are involved. Is this really the meaning of the fall? Was Eden unthinking animal life? Was sex placed on the auction block in the post Adamic world, where it was offered to the highest bidder on the Darwinian food chain, as the holy grail of that mixture of mind and body known as human pleasure? In an essay entitled "The Divorce of Coitus from Reproduction," (The New York Review of Books, 9/25/15), the chemist and novelist Carl Djerassi presents another product of consciousness--science--which has also served to remove sex from the burden of procreation. Djerassi remarks, "During the l960's, with the introduction of the Pill, sex became separated from its reproductive consequences. In l977, the British scientists Robert Edwards and Patrick Steptoe successfully carried out an in vitro fertilization (IVF), the process by which an egg is fertilized outside the body--ex utero--and the embryo is transferred into a woman's uterus several days later." It's a familiar scenario. Progress, in the forms of civilization and domestication, has created certain liberties--for which there has also been price to pay. The question is, have we arrived in heaven or inadvertently been condemned to hell?

{This was originally posted to The Screaming Pope, Francis Levy blog of rants and reactions to contemporary politics, art and culture}