Floodwaters in Texas continue to rise, creating conditions so severe that people trapped in their homes had no chance of being rescued overnight.

Authorities said 911 lines in Port Arthur ― about 91 miles east of Houston ― were still overloaded as of early Wednesday, and that rescues had to be stopped overnight due to the conditions.

“There’s nothing we can do,” Jefferson County Sheriff Zena Stephens told local news channel KDFM. “We can’t take the boats out right now. The water is rising and it’s coming there and [there’s] no way to get to them.”

People began begging on social media to be rescued. One woman made her first plea on Twitter at 1 a.m. local time:

Lord please! If you have a boat please come get me & my family I'm trying to stay calm but the water is coming in at a fast rate

She tweeted again about three hours later, having been told that rescues wouldn’t resume until daylight. “Water is now waist level & I still have not found any help this is crazy,” she wrote. “My phone is on 9% I’m 35 Wks pregnant ! Please keep calling for me water is waist deep.”

Many others tweeted out addresses of friends and loved ones:

my great grandparents are 90+.. very fragile, they need to be rescued !! 3580 lake Arthur drive in port Arthur off of jimmy Johnson PLZ RT‼️

please help my friend is stuck in her home with a family of 10. water is rising

800 10th st.Port Arthur tx !! Please somebody please send help my 1 year old nephew is in there along with the rest of my family PLEASE HELP

water is now rising at our home. 4248 vassar st port arthur tx! if anyone knows of
any assistance please send them we have a 4month old baby

The Jefferson County emergency management team said it had to wait until daylight to resume rescues.

Video shows raging floodwaters by I-10 as Beaumont-Port Arthur area hit by up to 25 inches of rain overnight https://t.co/YqYWvnl9tq pic.twitter.com/zyEU7qMOfj

Even people who were removed from their homes continued to fight the elements. Photos on Twitter show floodwaters invading Port Arthur’s Bob Bower Civic Center, where hundreds of evacuees were seeking shelter. People were eventually moved on Wednesday to the Carl A. Parker Multipurpose Center, even though police said the facility contained zero supplies.

Police weren’t able to reach people trapped in their homes because of the rising waters, but law enforcement officials were coordinating with volunteers to locate and transport people to shelter.

“We’re using the volunteers and their boats to get to those individuals,” McLellan said. “To do this on our own, we would have to have a fleet of several hundred boats. ... That’s just not feasible for a city or county to constantly have.”

McLellan said hundreds of people in the county have been rescued from their flooded homes in the last couple of days, thanks in large part to the “very, very valuable” efforts of the volunteers.

“There are just so many people, hundreds up into the thousands, that need assistance,” he said. “No matter how many boats we have, it’s going to take some time.”

This article has been updated with comments from McLellan.

When Rescues In This Texas City Stopped, Residents Cried Out For Help On Social Media
Animal Rescues After Hurricane Harvey 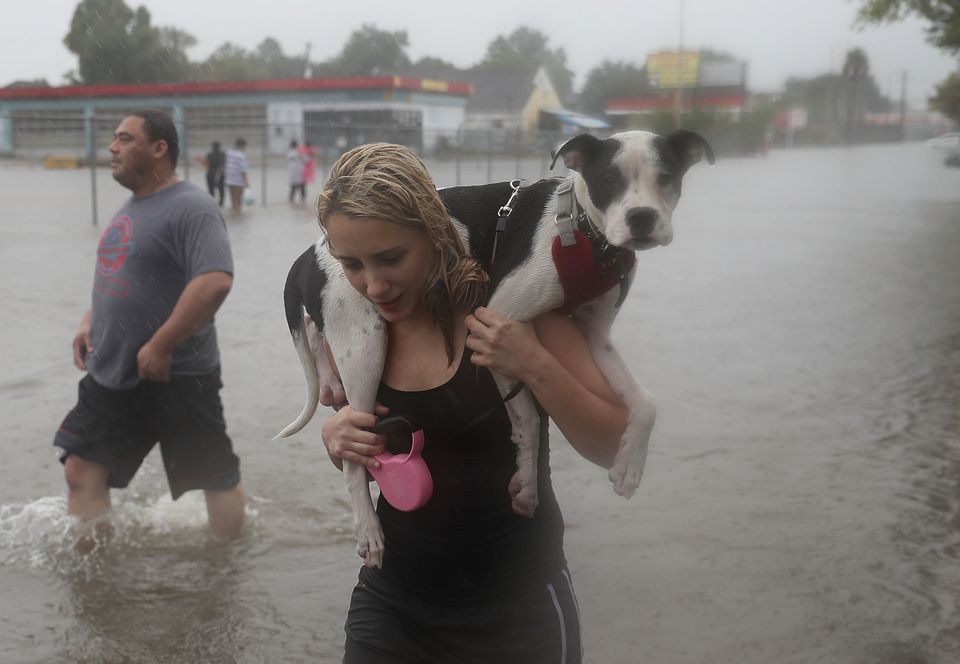 1 / 10
Evacuation Of Pets
This image of Naomi Coto carrying her dog, Simba, on her shoulders as she was forced to evacuate her Houston home on Sunday is just one of hundreds of pictures which show the lengths that many pet owners went to to save their pets.
Joe Raedle via Getty Images