California Democratic Congresswoman Janice Hahn expressed her support for striking clerical workers and longshoremen at the ports of Los Angeles and Long Beach in an interview with HuffPost Live Tuesday. According to the Associated Press, the strike is costing the U.S. economy nearly $1 billion every day, as cargo ships still idle offshore or are rerouted to other ports, including one in Mexico. The two ports -- both of which are in Hahn's 36th Congressional District -- are the busiest in the country and receive some 40 percent of U.S. imports.

Hahn told HuffPost Live hosts Alyona Minkovski and Jacob Soboroff that she supported the strike largely because many of the striking clerical workers are women and that these are good jobs that she does not want to see shipped overseas.

"These are jobs mostly held by women. This is about making sure these good jobs are not shipped overseas," Hahn said. "We want to keep these jobs for our daughters and granddaughters."

Los Angeles Mayor Antonio Villaraigosa announced Tuesday that a federal mediator will be brought in to help end the eight-day long strike, which includes some 20,000 members of the International Longshore and Warehouse Union, which has been trying to negotiate a new contract with 14 terminal operators for 2 1/2 years.

In her interview with HuffPost Live, Hahn sounded optimistic that the strike would be resolved soon. But a representative of management in the negotiations, Steve Getzug of the Los Angeles/Long Beach Harbor Employers Association, told the Associated Press Tuesday that it did not seem the two sides were close to a deal.

"If it's close to any agreement, it's what kind of bagels we're going to bring in for breakfast," Getzug said. 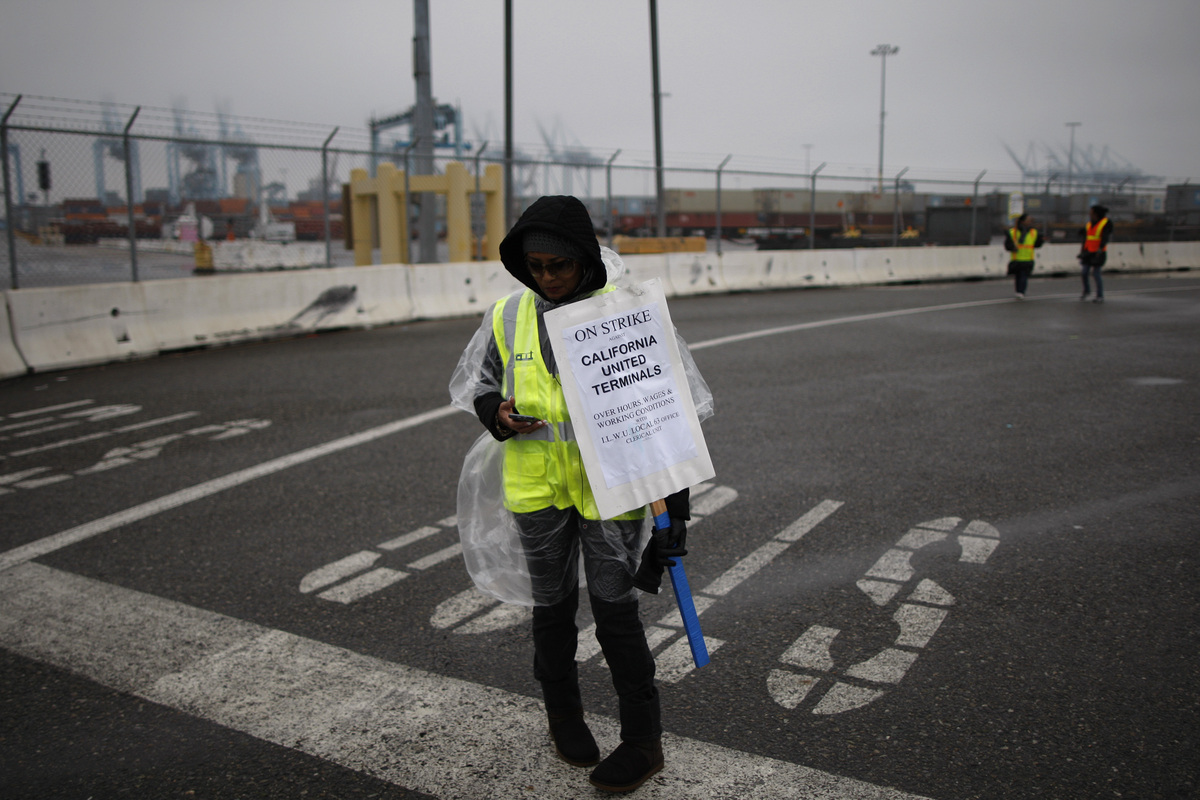 1 / 13
Workers At Southern California Ports Go On Strike
LONG BEACH, CA - NOVEMBER 29: Members of International Longshore and Warehouse Union Local 63 Office Clerical Unit walk a picket line near APM Terminals, halting cargo at the busiest seaport complex in the nation on November 29, 2012 in Long Beach, California. The strike is the largest work stoppage at the ports of Los Angeles and Long Beach since a lockout by shipping companies in 2002, which prompted President George W. Bush to intervene with a court injunction to resolve the standoff. (Photo by David McNew/Getty Images)
Getty Images