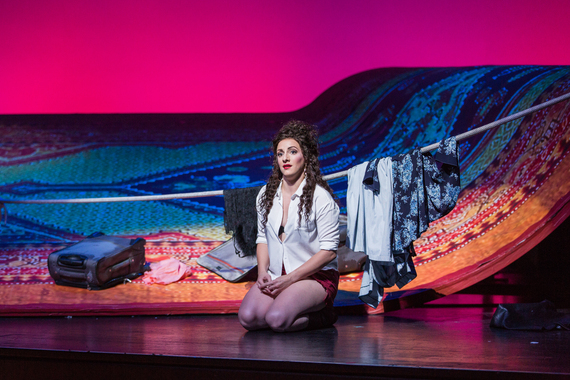 This summer the Portland Opera in Portland, Oregon presented their debut of Gioachino Rossini's The Italian Girl in Algiers. The production was highly entertaining and it neatly integrated madcap comedy with a wonderful interpretation by the cast of Rossini's score with its lovely, lyrical phrasing. It would be tempting to dismiss this work as simply a light comedy if it weren't for the deceptively complex and demanding score by Rossini that calls on all of the performers to stretch their technique throughout the opera. Also in the mix is the main theme of the story: the clever escape plan of the Italians from Algiers, which was actually a very serious topic despite the hilarious subterfuge used to fool their captor. Piracy and the enslavement of captives was not simply a plot device adopted for this story, rather it was apparently a topic of imminent concern during the era that Rossini wrote this work.

Rossini is better known for two of his other comedies: Barber of Seville and Cinderella. So, unfortunately The Italian Girl in Algiers, an important Bel Canto era comedic opera by Rossini, has often been overlooked by modern opera companies. Fortunately, Portland Opera's General Director, Christopher Mattaliano has had this work on his "to-do" list for some time, and chose this year to present this fabulous work.

The opera is notable for Rossini's mixing of opera seria style with opera buffa. It is also one of the relatively few operas that was composed featuring a Contralto as the lead. That voice range is similar to the Mezzo-Soprano, so the role of Isabella has been performed by both types of singers over the years. The work was first performed at the Teatro San Benedetto, in Venice on the 22nd May, 1813 and was a big success. Marietta Marcolini sang the role of Violetta for the debut. She was known for singing this type of demanding lead role. In fact, Rossini wrote five parts for her during the time period from 1811 and 1814. Also noteworthy are the host of other lead roles for a rich variety of voice ranges from Bass-Baritone to Soprano.

The entire cast of the Portland Opera production delivered virtuosic performances, which is especially impressive given the fact that this was the Portland Opera debut for Jonathan Johnson as Lindoro, an Italian suitor, as well as Aleksandra Romano, a Mezzo-Soprano, as Isabella, the protagonist who is instrumental in the escape plot of the Italians. The costumes and sets provided a visually rich experience, including a detailed and authentically designed large-scale carpet with the characteristic bright patterns of the Barbary region. The scene provided a wonderful backdrop for the performers who were very especially active up on the stage as the production involved a lot of physical comedy. Overall, the effect of the interesting mix of traditional and modern elements created the feeling of timelessness.

It was a rare treat to see this lesser-known opera gem by Rossini. Hopefully, more companies will follow suit and include this work in their upcoming season.