PORTLAND, Ore., Jan 13 (Reuters) - A bid to reduce racial and economic segregation in Portland public schools was postponed on Tuesday when a group of protesters stormed a school board meeting and demanded more time to learn about the planned policy changes.

The proposed change would limit transfers between schools, which white and affluent families have disproportionately used to remove their children from low-performing schools.

School systems across the United States are increasingly segregated along racial and economic lines, 60 years after the U.S. Supreme Court struck down the notion of "separate but equal" education, according to a UCLA study published in May.

But the proposal would not work as intended, said opponents, many with the Don't Shoot PDX activist group, who spoke against the changes at the Portland meeting.

Other demonstrators said parents had not had enough time to weigh in, and that they did not trust public school leaders to implement policies that benefit people of color.

District officials, who said they were caught off guard by Tuesday's protest, canceled the meeting and postponed the vote, but allowed those in attendance to continue speaking.

Four years ago, the Portland school district ended most transfers between high schools, while the new rules would also limit transfers for kindergarten through eighth grade students.

"Enrollment at Roosevelt High School has climbed from 500 students to 1,100 students, and the graduation rate is up from 44 percent to 66 percent in the four years since that policy change," Isaacs said of the school, which had lost white and affluent students before the earlier policy change.

Segregation has soared in the western United States in particular, according to the UCLA study, which also found that black and Latino students tend to attend schools with a substantial majority of poor children, while white and Asian students are typically in middle-class schools.

In Portland, school segregation is an inadvertent legacy of the George W. Bush-backed No Child Left Behind Act of 2001, which made it relatively easy for parents to transfer out of neighborhood schools, Isaacs said.

The measure led to overcrowding in some schools and empty classrooms elsewhere, he said. (Editing by Curtis Skinner) 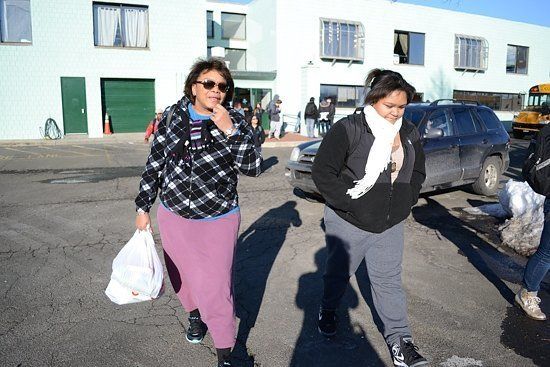 1 / 12
Nikita Rodriguez, who’s 14, gets up at 4:30 a.m. with her mom Nilda Paris in their apartment in Bridgeport’s East End. New Haven magnet schools accept kids from Bridgeport, but don’t offer bus service. Paris and Nikita don’t have a car. And the trains don’t run early enough to deliver her for the 7:30 a.m. start of school. So they hop on a series of buses, beginning at 5:30 a.m., to get to school on time. On the way home, they have two options: Take the train from New Haven to Bridgeport; or retrace their steps from the morning on the bus. They set off for home, both wearing new black sneakers, early Christmas presents from Paris’s mom.
Melissa Bailey/New Haven Independent