Three Portland, Ore., teens will be charged as adults in a shocking kidnapping and torture case in which they allegedly carved a swastika into a classmate's forehead.

According to KATU, four teens allegedly took revenge on a 16-year-old boy after he called a friend of theirs "gay" on Facebook.

Police allege that Jenna Jean Montgomery, 15, lured the victim to a shed behind a house in Southeast Portland Feb. 10 with the promise of drugs and sex, according to the Oregonian. She later told police she'd acted as "bait."

When the victim arrived at the shed, he was confronted by three boys -- Jess Taylor, 17, Blue Kalmbach, 15, and a 14-year-old boy who is charged as a juvenile. 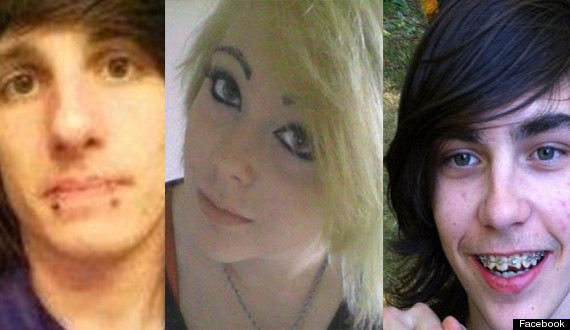 The victim told police that he was struck in the back of the head with a crowbar as he entered the shed. Kalmbach then allegedly shot the victim in the hand, chest and groin with a BB gun, and proceeded to carve a "swastika-shaped insignia'' into the victim's forehead with a box cutter, according to the Oregonian.

The teens took the victim's iPod and ordered him to go retrieve money and a skateboard. Instead, the victim escaped and ran to a nearby auto shop to call for help. The four alleged attackers were arrested later that day.

Police said the suspects considered their victim a bully, and saw their acts as retaliation. But the victim's mother said that's no excuse.

"He's been really emotionally and mentally traumatized. It's something he's going to live with, especially if the scar of the swastika doesn't go away. Every time he looks in the mirror, he's going to have that memory," Kelli Murrain told KPTV. "I'm almost ready to lose faith in humanity ... all this evil is running around and it's with our youth."

The teens are being held in a juvenile detention center. Charges against them include kidnapping, assault, and robbery. All four have entered not guilty pleas. A grand jury was expected to return an indictment Tuesday.

Portland Police Capt. Dave Hendrie said the details of the case disturbed even longtime officers on the force.

"It was shocking enough that even 20-year veterans were like, 'Wow'... that's just another level," Hendrie told the Oregonian.