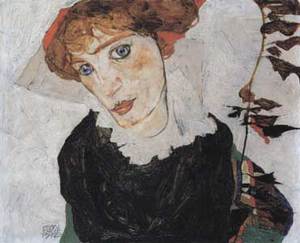 On Wednesday Aug. 18 at 7 p.m., the Museum of Jewish Heritage in New York will mark the end of its three-week exhibition of the much litigated "Portrait of Wally" by Egon Schiele, with a panel discussion moderated by the museum's director, David Marwell, elucidating the painting's tangled history from 1939 (when it was expropriated by the Nazis) to the present. Topics to be covered include the protracted litigation over its ownership and the broader implications of that vexing case.

At the commemorative ceremony on July 29 that celebrated the $19-million settlement of the legal dispute, Andre Bondi, representing the family receiving the financial compensation from the painting's current owner (the Leopold Museum, Vienna), spoke movingly of his father Henry's efforts to right a historic wrong:

David Marwell, whose museum hosted the event, highlighted one lesson to be learned from "Wally":

She can teach us about justice, even justice that comes after more than seven decades: how fidelity to basic values...and no small measure of hard work can help to get some things right.

But the some things about the resolution still don't seem quite right: While bestowing $19 million on the heirs of Lea Bondi Jaray, the Nazi-era Jewish owner of the portrait, the settlement sends the painting back to reside permanently in Austria, the country that Bondi Jaray had fled and the one from which she had vainly attempted to have her cherished painting returned. It remains in the collection of the Leopold Museum, established by Rudolf Leopold, the megacollector from whom Bondi Jaray had sought her painting.

The person who best expressed appropriate ambivalence about this ironic twist of justice is Edith Southwell, Lea's grandniece. Southwell, who lives in England, is (along with Andre Bondi) the official representative of Lea's estate.

Southwell sent a statement to be read at the New York gathering, in which she expressed these regrets:

For me this event is tinged with some sadness that my dear great aunt will never know that her struggles to claim what rightfully belong to her...were finally vindicated....While I personally cannot rejoice that the painting will return to Austria, where [Lea] was so wrongfully deprived of it, it is satisfying to know that her story and that of the attempts to recover it made in the United States will be displayed alongside it, wherever it is exhibited.

Another problematic aspect of the settlement is the statement issued by the Leopold Museum Private Foundation, acknowledging "moral responsibility to do justice to the history of Austria and of its Jewish citizens," but also expressing confidence that, had it persevered in the 12-year-old case, it "would have eventually won the lawsuit" to retain "Wally."

The foundation says that collector Leopold, who died before the settlement was announced, "was aware that his strength and health were failing. He desired to see the painting returned to Vienna during his own lifetime, and therefore initiated settlement negotiations of his own accord." But the foundation's statement, posted on the museum's website, reasserts Leopold's contention that he was blameless in acquiring the work:

Dr. Leopold always believed himself to be in the right regarding this case, and up to his final moment, he remained optimistic that justice would ultimately prevail. Those who give close study to the relevant history, documentation and witness testimony will thoroughly understand the way in which the collector acted, arriving at the conclusion that he had acquired the work in justifiably good faith.

But as stated in the press release from the office of the U.S. Attorney of the Southern District of New York, the sole focus of the case in U.S. District Court (which was on the brink of trial at the time of the settlement) was the question of whether Leopold had indeed acted in good faith.

According to the U.S. Attorney's Office:

In 1953, Dr. Rudolf Leopold...visited [Lea] Bondi during a trip to London. During this visit, Bondi told Leopold that the painting belonged to her and asked him to go to the Belvedere and recover it on her behalf. Leopold agreed to help her. Instead of helping Bondi recover her painting, however, Leopold entered into an agreement with the Belvedere [Austria's national museum] whereby he exchanged a Schiele painting from his own collection for "Wally."

When Bondi later discovered that Leopold had acquired "Wally" for himself, she retained lawyers to attempt to convince Leopold to return the painting to her, to no avail. Bondi continued to fight to recover her beloved painting until her death in 1969....

Yet another problematic aspect of the settlement was highlighted by Tom Freudenheim, a longtime American museum professional, in his July 27 article for the Wall Street Journal---What Is Lost When Works Are Trophies. Rather than being viewed primarily as an entrancing portrait of Schiele's mistress, "Wally" will (in Freudenheim's words) forever exist in an "alternate, extra-artistic perceptual universe," because of "the clause in the legal settlement" stipulating that "Portrait of Wally" must perpetually be accompanied by a wall label that goes into great detail about its complicated, contentious history.

The entire text (agreed to by both sides) of that five-paragraph label can be seen here. The final sentence will be deleted when the "trophy" is whisked away to Austria from its display at the Museum of Jewish Heritage. This lengthy verbiage will likely divert many viewers' attention from this small, exquisite jewel of a painting, which is much more textured and vibrant in person than in flat reproduction and needs to be appreciated in meditative tranquility.

Instead, Schiele's comely lover will always be the face that launched a hundred lawyers' briefs.