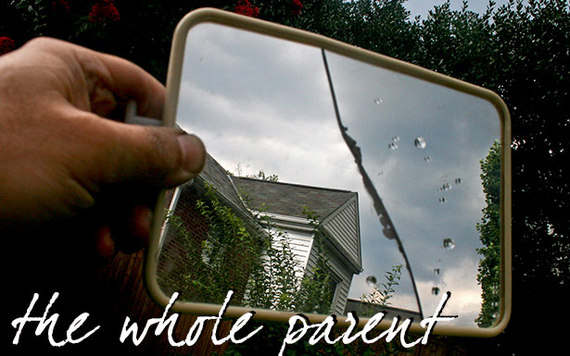 Be warned, some of you are not going to like this next sentence.

The divorce was a good thing.

I know, I can't say that with any information about your situation. But hear me out, and let's see if we can work through this concept of positive divorce. This is my story.

In the beginning we got married to start a family. And two bright shining babies came along just as we had hoped and prayed for. Healthy, beautiful, undamaged.

Then the path of life had its way with us. Economic pains, emotional pains, growing pains, all stretched us to our limits. And for a while we were both strong enough to hang on, hope for better times, and keep the family together. But we broke something in the process. We had different coping mechanisms for the difficulties. Some were helpful, some were destructive.

In the latter stages of our marriage things were difficult and dark. We struggled to keep the edges from showing too much to the kids, but we had begun sleeping in different rooms and speaking only as necessary to get the job of parenting done. We were doing the best we could, given the circumstances.

And that's the hard thing to remember. As mad as you get, as much blame as you can hurl at the other person, you have to get to the understanding that, as difficult or hard as it was for you, your partner was equally distressed and trying to cope and adapt and survive.

When survival kicks in, you're in the final stages of the married part of the relationship. Even if you weren't the one who asked for the divorce you were most likely looking and hoping for some release from the painful bonds. Perhaps you hoped, as I did, for the other person to change. Perhaps you just wanted to feel wanted again. Perhaps there was dysfunction to the point of concern for the wellbeing of your children.

Something happened, at some point and you both began to imagine life without your marriage. And even if you are in the throes of it now, in the anger and blame and bitterness, you will eventually grow out of that. You will pass through the stages of grief just as if someone had died. And in fact, that's a good analogy. The marriage has died.

If you have kids, however, the relationship will last a lifetime. It's often a bitter pill when you discover how entwined you still are years after divorce. How decisions your former spouse makes can drastically alter your life.

If we move through our own recovery process, we begin to emerge from the blame and anger. We often then move into grief and loneliness. At this stage it is common for one or both of the partners to jump back into relationship. To find someone else to fill the gaping hole. But, I would caution this enthusiasm for a bit longer. And here's why. There is still more growing that needs to happen within you, before you are ready to attempt a new journey. Why would you want to cover over the past mistakes and repeat them with another person.

As loneliness and possibly depression is being plumed, you may often seek support in the form of counseling or therapy groups. I personally joined a divorce recovery class in my city, and spent the next 10 weeks meeting with 18 other divorced people, men and women, to discuss and map our growth out of the hole of shame and blame.

Emerging again from the emotional wreckage of divorce you may be ready to date again. And this time you hope, find ways to cope and navigate the relationship in more constructive ways. But even as we go on to date, kiss, have sex, and perhaps even marry, we still often have work to do on the hidden anger and resentment of our divorce.

In my case I felt betrayed. I was never willing to give up. I was fighting to stay in the marriage even after I learned the my wife had already seen an attorney. So I was devastated and deeply depressed when I had to agree, finally, to the divorce. And I sunk to the lowest point in my life. And I needed help.

And there was no way for me to process the divorce when I was in such a wounded place. I jumped quickly on a few dating sites, determined to jump into bed and heal my sexual emptiness. But that didn't work out. And I'm kind of glad it wasn't as easy as I had hoped. My heart still had a long way to go to release the obsessive compulsive desire that had been created by the last few years of my divorce, that had been rather sex-less.

Today I mark the fourth year since I walked out the door of my house, and gave primary custody of my two children to my ex-wife. And I'm just now beginning to understand how deep the forgiveness must go, for me to completely agree that the divorce was a positive event in my life. And even more so, a positive event in the lives of my kids. (Now 13 and 11.)

How can I explain the positive side of divorce to any daughter who misses the daily connection with her dad? Or the wounded sons I see who don't see or receive any love from their absent fathers? Early in the process of divorce, it is nearly impossible to imagine a positive side to what is happening. And if the echoes of your parents divorce still haunt you, like they did me, I was certain it was the end of everything. (Much like I did when I was 5 and learned that my dad had moved out of the house.)

The first step of letting go is just beginning to understand that the blame, regardless of what happened, is squarely and equally on both your shoulders. I know, again, there is no way I can know or say that about your marriage. But if you can just imagine that it is half your fault, even if you have to pretend that you believe it, you will pull out of the pity and sorrow much quicker as you release your feelings and anger at the partner who is no longer your spouse.

Positive divorce is a choice. And the process to get there requires time, insight, and often the help of professionals. But the alternative is bitterness and continued failings at love relationships as you make the same mistakes, miss the same red flags, and put up with the same behaviors that got you into divorce in the first place.

Get help. Reason things out with another person. And let go of your blame. The rest of your life you will be relating to this person, if you have kids, and your healing can go a long way towards healing everyone.

related posts:
I welcome your comments and suggestions, as well as your participation on
Facebook
and
Twitter
.

More:
angerParenting divorceblameParenting After Divorce
Newsletter Sign Up
An essential daily guide to achieving the good life
Subscribe to our lifestyle email.
Successfully Subscribed!
Realness delivered to your inbox