"We will turn to the only resource we have that in times of need always grows -- the goodness and the courage of the American people," George H.W. Bush said in his inaugural address, in 1989. It was an optimistic statement, using the future tense and positive words. Unfortunately, over the next four years, GDP plummeted and unemployment shot up. Bush was not an outlier in his misplaced optimism. In a paper in press in Psychological Science, researchers report that expressions of positive thinking about the future -- in inaugural addresses from 1933 to 2009 and newspaper articles from 2007 to 2009 -- reliably predicted economic decline.

The researchers, led by A. Timur Sevincer, of the University of Hamburg, built on previous work showing that positive thinking leads to reduced effort and success in many areas of life. Gabriele Oettingen, of New York University, and her colleagues have shown that while expectations correlate with positive outcomes, fantasies about success actually backfire. In one study, obese women in a weight loss program who most expected to lose weight shed 26 more pounds than the other women, while those with the most positive fantasies -- they pictured themselves showing off their new bodies to friends a year later -- lost 24 pounds less than those with the most negative thoughts. In another study, college students who most expected to find a job after graduation were more likely to find one over the next two years, while those who had more positive than negative fantasies sent out fewer applications, received fewer offers, and made less money.

What explains these paradoxical results? If you vividly picture a desired outcome (weight loss, a job offer), without also thinking in detail about what stands in your way, it's a bit like you already have the prize, so you don't strive so hard. Relatedly, Carey Morewedge and colleagues have shown that if you imagine stuffing your face with cheese, you're less likely to indulge when an actual platter is placed before you. You feel satiated. So all those vision boards that readers of The Secret have constructed -- covered with magazine cut-outs of mansions and beach vacations and slim waists (but never world peace) -- are likely to remain mere visions dancing in their heads.

Positive thinking also biases us to ignore negative information and encourages risk-taking behavior -- such as betting on a forever-growing real estate market and investing in precarious mortgages. (In 2006 the economist David Lereah published the book Why the Real Estate Boom Will Not Bust -- And How You Can Profit from It, which is now available on Amazon for $0.01.)

If optimism has these effects on individuals, maybe it affects society as a whole in the same way. The researchers used textual analysis of front-page stories in USA Today and Presidential inaugural addresses to compute the ratios of positive to negative words (e.g., dreams, hopes, better; fears, worst, negative) and future- to past-tense words. Sevincer tells me this technique aimed to measure positive thinking in the form of "freely generated thoughts and images that depict possible futures in an idealized way," thus closer to fantasies than to expectations.

In the analyzed articles, positive thinking about the future correlated with lower Dow scores a week and a month after their publication (but not a week or a month before). In the addresses, positive thinking about the future correlated with lower GDP and higher unemployment four years later (but not four years before). See below. Bush's speech, for instance, was the sixth most positive among the 20 analyzed, and preceded the worst economic decline. FDR's fourth inaugural address, in which he says that "[God] has given our people stout hearts and strong arms with which to strike mighty blows for freedom and truth," was the most positive speech and preceded the second worst economic decline. Although the study was purely correlational, it appears that the articles and addresses reflected -- and perhaps also incited -- positive thinking that led to negative outcomes.

As much as popular culture preaches against negative thinking, our capacities for vigilance and pessimism evolved for a reason: to get us and keep us out of trouble. 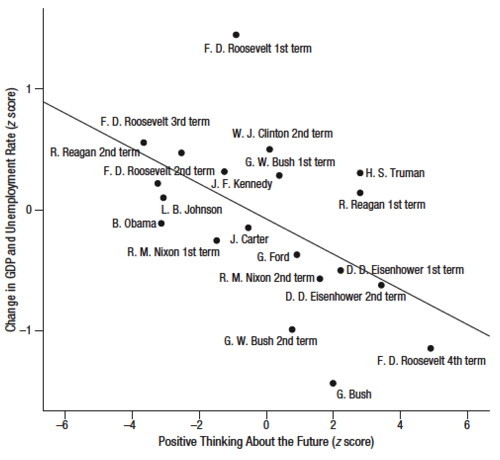