Civil society should connect the dots around Copenhagen's failure, pee its collective pants, and then come up with an effective plan in 2010 to cope with a rapidly changing planet.

I'd hoped the Copenhagen climate conference was a bad dream that might fade from memory after the holidays. No such luck. Over said yuletide, I corroborated my presence in Denmark via a digital photo taken by Andrew Revkin, former environment reporter at The New York Times.

During the 10 days I reported from Copenhagen, I bore witness to stories of climate breakdown underway in developing countries. I was cognizant of looming climate catastrophes in developed nations, whether through sea-level rise, drought, or disruption of supply chains to Western stores from Asian factories.

And I observed how nation states failed to incorporate the findings of climate science into economic policy, unjustly ignoring the basic aspirations of people around the world who want to be saved from terrible climate impacts.

So, how does one make sense of the disastrous Copenhagen summit, and bring perspective to its troubling outcome?

My approach was to look for patterns among seemingly disconnected climate-conference phenomena -- in my case, firsthand experience with a climate obstructionist, a chaos theorist, a Danish chair and a rock star.

On December 17, Republican Senator James Inhofe, noted U.S. opponent of climate change legislation, arrived in Copenhagen for a three-hour visit. He spent a half hour of that time holding court at the official media centre.

Said Inhofe to the impromptu media scrum, "There's no [scientific] consensus on climate change." Referring to the hacked emails from the University of East Anglia, he added that climate science was "discredited" because of the emails' content, and that we, the journalists, whom he said were on the "left" didn't understand the "truth."

The European journalists were stunned. A German scribe told Inhofe he was "silly."

Soon afterwards, I looked over at Eric Reguly, the Globe and Mail's European business correspondent.

I believe the chasm -- between political compromise and the economic and climate action that's needed to protect humanity from being waylaid by climate impacts -- is insurmountable.

How insurmountable? Read on.

According to Hans Joachim Schellnhuber, director of the Potsdam Institute for Climate Impact Research in Potsdam, Germany, COP 15 was "the most important meeting in the history of the human species."

Schellnhuber, a physicist and chaos theorist who doubles as Angela Merkel's chief climate advisor, made a presentation at an official side event the same day as Inhofe's sideshow.

He outlined a strict carbon-budgeting regime that the Potsdam Institute proposed in 2009 as a plausible scenario for limiting global warming to "a mean temperature [increase] of 2 degrees C," thus avoiding "dangerous, irreversible and practically uncontrollable consequences for both nature and mankind."

The green group could emit the most carbon for their development, the red group would have to move quickly towards decarbonizing their economies, and the orange group would be in-between.

Under this proposed initiative, the E.U. alone would need to pay the green countries 100 billion euros per year for their CO2 emissions, while planning to effectively decarbonize under a timeframe, given its current emissions profile, of less than 15 years.

The U.S., meanwhile, would need to decarbonize within the next five years with a mix of carbon trading and a major reduction in its U.S.-based carbon emissions. It's a feat that would require real reductions of carbon emissions of 5% per year if the U.S. started today.

If the U.S. decided to delay until 2020 to begin reducing its carbon emissions, it would need to reduce real carbon emissions levels by 9% per year. Pointing to the historical record of economies being commandeered in wartime, Schellnhuber hinted that such drastic emissions-levels reductions could only be achieved under military-type rule.

According to experts, including Jiahua Pan, head of the Research Center for Sustainable Development at the Chinese Academy of Social Sciences, Schellnhuber's math works, even if you disagree with his insight on draconian governance.

Which means you should be peeing your pants now -- and for the next five years -- as practice for when this gets visceral, scary, and hard, as opposed to just being mathematically and practically discombobulating.

That's why the Potsdam Institute proposal will never fly.

It implies we need to change our civilization's trajectory at a speed that blows the mind, induces vertigo, triggers paralysis, and necessitates a trip to Costco for adult diapers.

Sit down and ponder that for a moment. On a chair. A very special chair.

It was appropriate that, given predictions of a stormy U.N. Climate Conference, the Danish cabinetmakers, a prestigious guild of furniture makers and designers, held their annual autumn exhibition on the theme of dialogue and negotiation.

The exhibition was called "Dialogue: A Chair That Is Up for Negotiation," and I attended it as part of a press tour organized by the Danish Ministry of Foreign Affairs.

The exhibition featured 37 chairs that were designed to help audiences ponder the role of chairs in setting the right tone for solving problems such as climate change.

I became transfixed by one chair in particular.

Danish designer Torben Bay built a chair prototype that seemed as if it could double as a one-person life raft -- perfect for helping policy negotiators reflect on the climate-change realities they were allegedly attempting to forestall.

I mused about the diplomatic incident that might have been provoked had Denmark, as official chair of the climate conference, recommended that negotiators for developed countries sit on Bay's design.

Towards the close of the Copenhagen conference, at the end of one particularly long day, I meandered about Bella Centre (the official venue) and happened on a deserted eating area, where a man in red pants sat while working on his laptop.

I politely interrupted the gentleman, introducing myself as a journalist, and asked whether he had a moment to swap impressions. He said he was there as a journalist, too, and that he wanted to observe the Copenhagen process with his own eyes. He said he'd gotten his press pass "through a contact at National Geographic."

I told him about a non-governmental organization I'm launching this year to help organizations recognize and address the mental health impacts of climate change, including despair and desperation.

He spoke of what a friend of his termed "dissonance" at the gap between what politicians were communicating to the public versus action that was being taken. At some point, I can't remember just when, he mentioned he was "quite famous" and had been intensely involved in environmental campaigning. He added that he'd done work to help a "climate bill" get passed in the U.K.

Whoever this guy is, I thought, he knows the political, psychological, and social implications of climate change better than most people I've met in Copenhagen.

When I got up to leave him to his work, I said, "You're probably really glad I don't know who you are." He chuckled.

Only later did I learn I'd missed the big scoop of the day: Thom Yorke, lead singer and lyricist for Radiohead, had sneaked into the climate conference using a press pass.

It was reported he wore red pants. 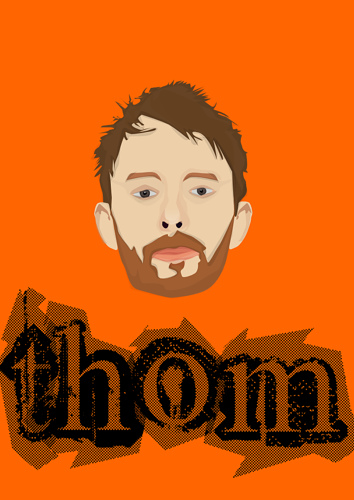 i feel deeply traumatized by the whole experience. if you'd been there, you would also have been.

There you have it: Obstructionism fostering chaos, inspiring a designer's reflection on blindingly obvious metaphors to penetrate civilization's normalized madness, the futility of which culminated in profound emotional trauma.

That's Copenhagen in a nutshell or, it might be said, Business As Usual 2.0 -- business as even more insane than ever before.

Welcome to 2010: The year of making a plan to cope with Post Copenhagen Stress Disorder!