While the buildup to anything is always more exciting than the actual event (see Lewis Black's latest album Anticipation), I can't say I left the debate atmosphere at Hofstra University disappointed. Parts of it were underwhelming, yes. (The alumni debate party I attended was mostly attended by alumni who graduated in, oh, 1952ish? Maybe 1975ish? Either way -- no one I knew.) But knowing that this brawl was taking place on my campus, that for the first time, something this nationally important was within reach, was just as good. Barack Obama and John McCain were going to debate in the same spot I received my diploma!

One thing that made the night grand was finding a parking spot. A legal one. One that did not get me a ticket, a boot on the wheel or a towing. I don't think people always realize how much this can make or break a night. But this was like getting Christmas and Hanukkah presents. Of course the Schrodinger's Cat situation you're wrapped up in throughout your excursion can impede on the minimization of stress you were hoping for.

Anyway, I arrived at dusk, which illuminated all the protesters nicely, along with all the flashing lights of cop cars. It was especially fun to walk through the Code Pink crowd and the folks with the creatively grotesque and offensive t-shirts to buy a sandwich. 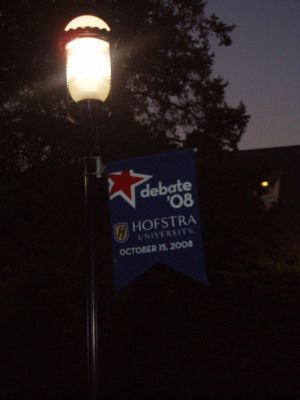 Hofstra Hall, the original building when the campus was established: 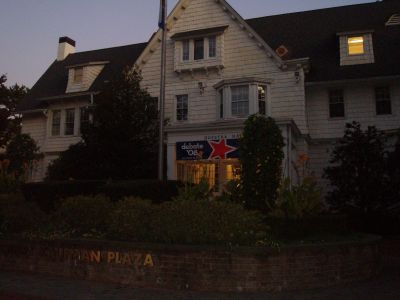 At about 8:00, I ditch the alumni party to cross the unispan and meet up with a friend who is covering the debate with fellow students for Stony Brook University. It is then that I join the ranks of dozens who have designated themselves Sarah Palin impersonators. There is video evidence of my interpretation of the doggone governor, and I'll have that up soon, you betcha!

I took the liberty of correcting some of these flyers. 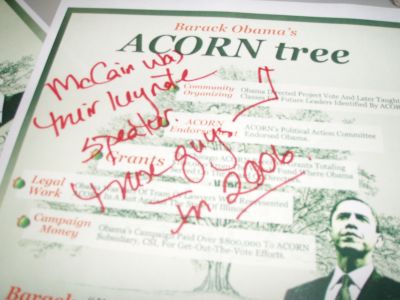 A huge crowd comes in, making a lot of noise - the sign-holders. But why are they just randomly moving en masse through the student center? 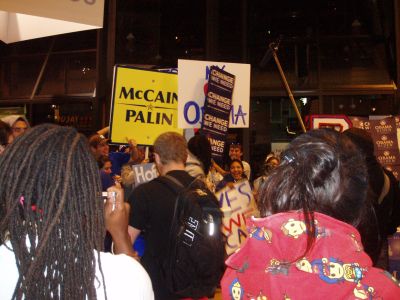 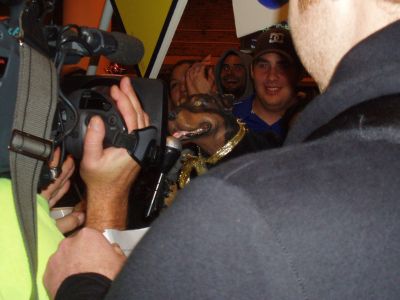 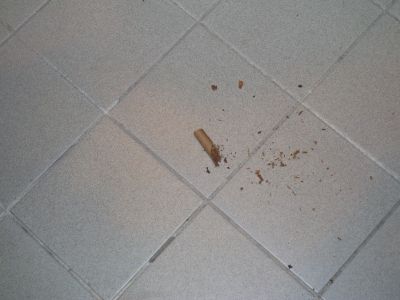 After that excitement, I head back to the debate. I won't give a blow-by-blow, but I did wonder out loud via text message to two of my guy friends if McCain was actually sleeping with Joe the Plumber and perhaps jilted him, so he gave him shout-outs during the debate, what 86 times, to satiate him. Whatever the situation, he probably won't be voting for McCain -- or Obama.

I thought McCain sucked. I know I recently posted about how bad I felt about McCain's feelings during this whacked out campaign, and I still think this all sucks for him, but maybe if he didn't make it worse for himself, my empathy would not have dwindled. When someone tells you that people at your rallies, and those held by your running mate, are calling him a traitor and a terrorist and wishing death on him, the absolute wrong thing to say is that you're proud of your supporters. Really? Wow. What McCain should have done was say he was proud of those who came out to support him, but condemned the use of hate speech as disrespectful and dangerous, adding that he's not proud of such behavior. What he actually said was that he was actually the victim of not only mean Obama ralliers, but the media who didn't cover the mean Obama ralliers. Really? Wow. Dick move. Dick. Move.

Not to mention all the interrupting, rude chuckling and eye rolling. Mr. McCain, I'm sorry, but you looked like an asshole. I know live TV is rough, and you're clearly not cut out for it, and that's okay. But people who want to be president need to know how to pretend. Not as much as your running mate, who treated her debate like a beauty pageant. But who came out of this looking like the guy we want handling testy situations? Not you, sir. But the other one, smarty pants, with that doggone "eloquence" that you despise so much.

And wow -- nothing good to say about your running mate, huh? Interesting.

After the debate, I caught up with my friend and my new friends, did more Palin. Then we dispersed, walking past -- gasp -- the MSNBC tent. HuffPo's own Rachel Sklar pointed out that I'm a huge MSNBC junkie. It's true. And I said in my post yesterday that knowing Chris Matthews was on campus was akin to knowing Santa Claus was nearby. I was right. I went back by the tent alone. I didn't get to meet him personally, but you know how you felt when you saw Santa for the first time -- in person-ish -- at the Macy's Thanksgiving Day Parade? That's what it was like. 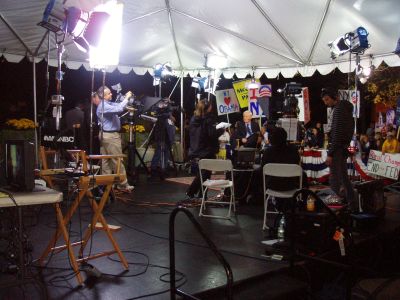 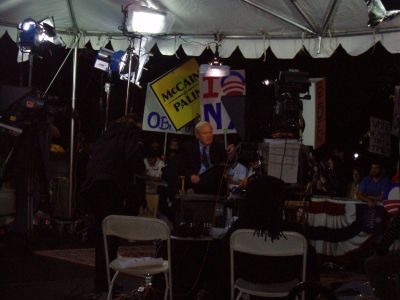 And it all happened on my campus. Happy Hofstra indeed!

Very special thanks to Wendy Young at ObsessedWithBones.com for editing my photos this morning!