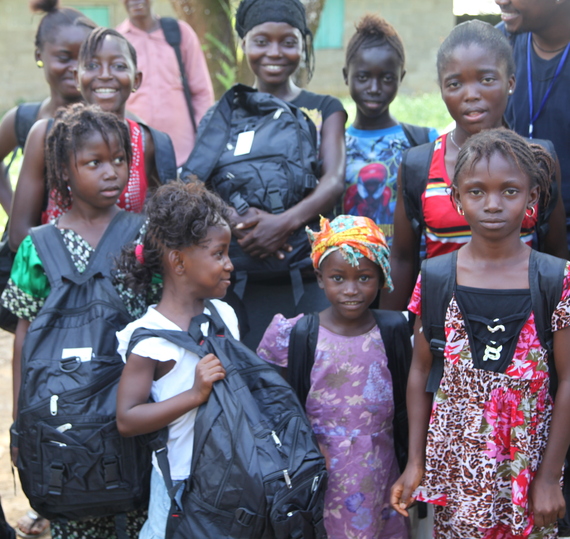 When the Ebola crisis hit West Africa closing schools indefinitely, I know I was not the only person who slowly laid their head on the desk and sighed. I knew what education professionals have always known. This would be a long fight. Not only would education -- often the first sacrifice in times of emergency -- be the last to recover from this crisis, for many children the door to their education would always remain closed.

More than 5 million children were kept out of school some for nearly a year. The longer students are out of school and the more they fall behind, the more likely they are to never return.

Out-of-school children -- particularly in poor settings -- are at high risk of abuse and exploitation as real or perceived opportunities for the future narrow particularly for already poor families. Rates of child labor and child marriage rise quickly with school closures as do sexual and other types of violence. Within just a few short months of school closures many female students in primary school were visibly pregnant.

Then it went from bad to worse.

In Sierra Leone, where re-opening schools has taken the longest, Dr. Minkailu Bah, the Minister of Education, decreed that 'visibly pregnant' girls can not return to school at all. The Council of School Principals and the Head Teachers Association backed the decree noting that pregnant girls will be a 'bad influence' on other more 'innocent' girls. Not only is this a poorly cloaked assault on the right to education for these girls, it ignores the reality of what young girls in Sierra Leone face in terms of control over their bodies as well as access to reproductive health services.

According to well known Sierra Leonean education advocate Chernor Bah, who has been strongly speaking out against this policy, roughly 85% of girls in Sierra Leone aged 15-24 years said their first sexual encounter was with a man at least ten years older and less than 10% of women of reproductive age use any method of contraception. Assuming that some girls are actually able to make choices and be in control of their bodies, even during a prolonged quarantine, health clinics overwhelmed with Ebola were not providing reproductive counseling and services.

Lack of access to health services, education and basic child protection measures have created a crisis for girls and young women in Sierra Leone -- leading to high rates of child marriage and teen pregnancy. Education -- not shaming the mothers of the next generation -- is critical to end this crisis.

Every year that a girl stays in school increases her chances and the chances of her children of basic survival. This is likely one reason why Sierra Leone's president Ernest Koroma recently committed the government to pay school and exam fees, and provide supplies, for public school students for the next two years.

To show true revolutionary vision, President Koroma will also stop efforts to push pregnant girls out of the classroom, deny their right to education and pretend that they are the source of their own poverty and exploitation.

This moment is an opportunity for President Koroma to not only to stand up for these girls and provide services so they can have healthy pregnancies and finish their education, but also to have a real national conversation about the root causes of these and other young pregnancies. This conversation should include the creation of strategies to empower girls to prevent coercive sex and to report rape and abuse, strengthen the legal system to enforce the child marriage ban, and create a system that protects and values girls rather than punishing them for things that are beyond their control.

President Koroma will show true leadership by supporting pregnant girls to get back in classrooms, finish their education and raise their children to do the same.