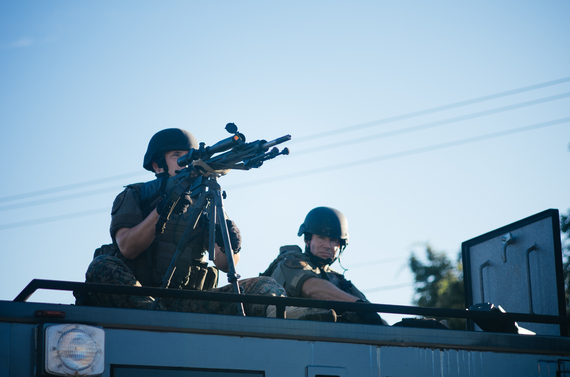 As the Ferguson fight rages on, a potentially more courageous Congress stands ready to return, post-elections, to shut down that which rightfully enraged protestors initially. Last month, Republicans and Democrats in the Senate and the House of Representatives finally took a stand against the growing militarization of our police forces and our main streets. Shortly after Congressmen Hank Johnson (D-Ga.) and Raul Labrador (R-Idaho) introduced the Stop Militarizing Law Enforcement Act last month in the House of Representatives, a bill that has over 30 bipartisan co-sponsors, Sen. Tom Coburn (R-Okla.) introduced a bill by the same name in the Senate. Congress is waking up to the rapidly changing face of American law enforcement, and it is ready to do something about it.

The Senate and House bills target the Pentagon's transfer to police forces of free military-grade equipment coming back from U.S. wars in Iraq and Afghanistan and elsewhere. This program has gifted over $5 billion-worth of recently used and unused war equipment -- armored personnel carriers, tanks, Humvees, and Mine-Resistant Ambush-Protected (MRAP) vehicles, grenade launchers, armed drones, and assault weapons -- to U.S. police since the late 1990s when the program first started. The bicameral legislation would prohibit the transfer of these military weapons. Given that the Pentagon has 13,000 MRAPs to give away, this comes at a critical time.

Sen. Coburn's bill would go further and also target the Department of Homeland Security (DHS) "terrorism grants" program, which has given over $40 billion in grants to U.S. police and allowed police chiefs and county sheriffs to buy new military-grade hardware for America's streets. This program, which started for meritorious reasons to improve interoperability of emergency first-responders, has gone unchecked. It's been a boon for a defense industry keen to create new sources of revenue. In response, Coburn would rightly crack the whip on DHS and cut off the flow of all military weaponry to U.S. police forces. And since the senator is retiring soon, his no-holds-barred approach would do exactly what's needed to demilitarize America.

Together, these bills represent serious, bipartisan congressional leadership. Reps. Johnson and Labrador and Sen. Coburn want to preserve the American way of life; they don't want our main streets looking like the war zone. Furthermore, these cost-conscious members of Congress don't want American taxpayer dollars wasted on $30,000 maintenance costs for $700,000-a-piece MRAPs or weapons trafficked on eBay and given away to friends. Weapons that have gone unaccounted for, as part of the Pentagon program, have totaled in the millions of dollars. That's U.S. taxpayer funds that could've been spent on education, jobs or infrastructure.

The fury expressed in last month's Senate Homeland Security hearing on police militarization -- in which multiple bipartisan Senators angrily grilled Defense Logistics Agency, DHS and Department of Justice witnesses for the serious lack of accountability, training, and needs assessment in these programs -- reflects the urgency of this legislation. That's why the bills' authors would also mandate much needed oversight and monitoring of this grossly mismanaged process.

Going forward, this courageous congressional leadership will, hopefully, spark a conversation in America about how we want deal with threats. America is being militarized at a dangerous pace. Hundreds of thousands of these war weapons have been passed along to our police forces, inspiring several media outlets to pursue Freedom of Information Act requests to document the abuse and advocacy orgs to spring up in response.

And just in time: U.S. towns as small as 4,000 in Michigan and 16,000 in North Carolina were getting MRAPs. Safe, small-town America is being threatened: More than 25 towns across the U.S., no bigger than 25,000 in population size, now have MRAPs. As the American Civil Liberties Union reported this summer, war has come home to America and it is excessive.

The question of what to do with already militarized police departments, as existing legislation only deals with future transfers, can be answered the example set by the City of San Jose, California, which recently returned its MRAP to the Pentagon. More departments now need to follow suit.

But military equipment in the hands of police isn't the only problem. Tactics are becoming increasingly militarized. Most police departments, and even federal agencies such as the Department of Education, are using Special Weapons and Tactics (SWAT) units to issue basic warrants -- at an average rate of 150 raids per day. This trend will only escalate tension in our communities, making people feel less safe, more guarded and more defensive -- especially in minority communities where police forces are majority white (three-quarters of U.S. towns with 50,000 people or more have white-majority police forces patrolling minority communities).

Stopping violent extremist groups or individuals, whether in America or overseas, doesn't require a militarized approach. As Rand Corporation showed in studying nearly 300 terrorist groups between 1968 and 2006, over 83 percent of them were ended or dismantled by negotiations, integration into the political process, intelligence or policing. Only 7 percent were ended by military force.

The lesson for America law enforcement, then, is to ensure that police represent the community's demographics (a political issue), live in and integrate with the community (a trust-building and intelligence gathering issue). Anything that increases the distance and distrust makes deterrent and de-escalation much more difficult. Former police chiefs -- such as Seattle Police Chief Norm Stamper, who once used military tactics on protestors in Seattle's infamous 1999 protests against the World Trade Organization -- are saying the same thing. We should take note.

The time is now to change the way we police America before hundreds of thousands of more pieces of military gear go to main streets across America. The face of America is changing quickly. Let's make sure it's not for the worse.

Michael Shank, Ph.D. (@Michael_Shank), is associate director for legislative affairs at the Friends Committee on National Legislation and adjunct faculty at George Mason University's School for Conflict Analysis and Resolution.