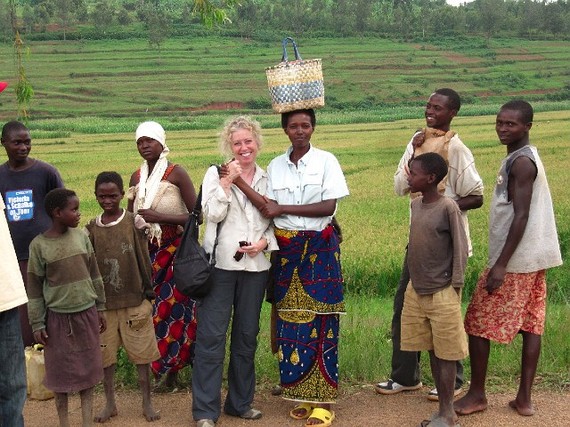 Filmmaker Lisa Fruchtman on the set in Rwanda

After witnessing the ethnic cleansing of 800,000 fellow countrymen, what should be prescribed for healing and moving on? Drums and ice cream?

This is just the tack taken by a band of brave Rwandan women a decade after the vicious 1994 Hutu/Tutsi civil war in which a 100-day slaughter called for by the then ruling government pitted neighbor against neighbor, husband against wife, often severing families and friends. Who would ever guess that signs of life would come flickering back with music, milk and honey?

Sweet Dreams, a documentary by sibling filmmakers Lisa and Rob Fruchtman, provides a heartrending view of the remarkable changes brought about by a group of women of indomitable spirit. Led by Kiki Katese, a Rwandan theatre director, they take actions the likes of which Rwanda has never seen. Perhaps when people have witnessed unimaginable brutality and lost what they most loved, they are less resistant when customary roles are challenged, like the restriction that only men can be drummers.

A long-standing tradition In Rwandan society prohibited women from touching the drums or even approaching the drummers, who performed for the king. When Kiki asked the reason why, men told her drums are too heavy for women to handle. To which she answered, "Let's see how strong we are."

Demonstrating that they could in fact pick up and move the drums, a group of women under the guiding light of the intrepid Kiki formed in 2005 Rwanda's first troupe of all-women drummers called Ingoma Nshya, or A New Drum. One of the women says, "If there's a place you can find peace, that place is Ingoma Nshya. That's where I was reborn."

The film features their explosive rhythms on stage and in the village square -- as Kiki says, they intend to inspire a new era, a new kingdom. Kiki has a new set of rules: The 60-women troupe must support all talented women alike: both Hutus and Tutsis, as well as orphans, widows and daughters of the perpetrators of the genocide. All Kiki requires is that they forget the past: "When you forgive, you move forward."

In a marvel of trans-continental business alliances, Kiki teams up with Jennie Dundas and Alexis Miesen of Blue Marble Ice Cream in Brooklyn. In partnership with the women of the drum troupe, they form a co-op to make this unheard of concoction in the small town of Butare. These independent-minded and hard-working women open the country's first ice cream shop.

The development of the co-op business serves to bring out the character and drama of the women involved. They haggle over the dues, who works at the shop, how to handle the money, where to publicize the grand opening -- which they do with a megaphone from the back of a pickup truck, heralding, "Ice cream will make you young again!"

Rob Fruchtman caught some fascinating local footage -- the beekeepers whose honey sweetens the ice cream, the dairy cooperative that provides the milk, the people who are trying to recover from the past. One character notes that surviving Rwandans are upright and walking around, but inside many are not alive. The film includes some brief vintage video of the remains from massacres, of scores of bodies lying facedown in the dirt and a chilling radio voiceover calling friends to celebrate the extermination of the Hutus, "God rewards the just."

Some of the drum troupe are profiled, their stories told from the genocide forward. Seraphine, a Tutsi, lost her whole family who scattered from their house when the killers arrived with machetes. A child at the time, Seraphine was hidden in a hole by a neighbor and covered with leaves, then later delivered to an orphanage. By the end of the film she has been hired at the ice cream store and saved enough money to rebuild the house on the land where she grew up.

Lisa Fruchtman, (winner of an Oscar for The Right Stuff and nominations for Apocalypse Now and The Godfather: Part III), has done a masterful job of editing the film, shaping the footage into a story that is at once anthropological, political, personal and a captivating travelogue. Ultimately Sweet Dreams is a story of survival, of the resilience of the human spirit and the power of the arts to restore and rejuvenate. Drums and ice cream, the musical and culinary arts (who says they are non-essential?) are together bringing Rwanda back to life. 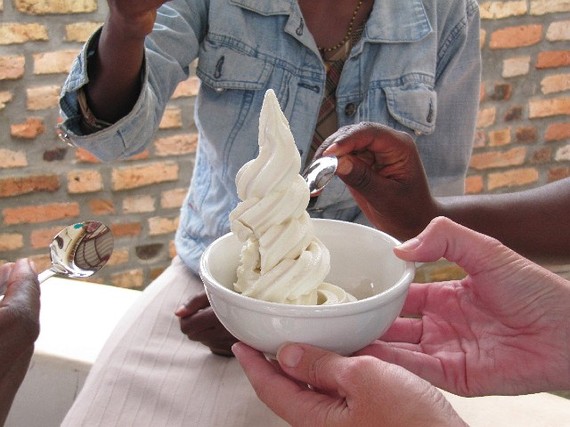